On the occasion of Dusshera, Shilpa Shetty shared sneak-peeks into her son, Viaan Raj Kundra's 'Ravana Dahan'. Scroll down to check out the video! The festival season in India kicks in with the most happening festival, Navratri, which culminates into Dusshera on the tenth day, which symbolises the victory of good over bad. Since the year 2020 had started on a very gloomy note, people were particularly looking forward to some moments of celebrations and happiness they could hold onto, and although the celebrations were a little dim this time around, the enthusiasm was same as ever. (Recommended Read: Mandira Bedi And Husband, Rraj Kaushal Adopt A Baby Girl, Say The Family Is Complete Now)

Bollywood's supermom, Shilpa Shetty Kundra's Navratri was extra special as it was her baby girl, Samisha's first. And ever since the start of the festival, Shilpa had shared glimpses of the celebrations and puja at her home. On the occasion of Dusshera, Shilpa Shetty Kundra shared sneak-peeks into her son, Viaan Raj Kundra's 'Ravana Dahan'. Scroll down to check out the video! 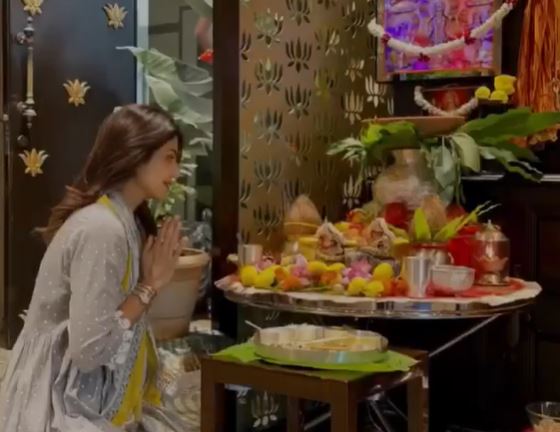 On October 24, 2020, Shilpa Shetty Kundra shared videos of 'Ravana Dahan' with her family on her IG stories. In the video, Shilpa along with her husband, Raj and son, Viaan were seen lighting up the 'Ravana' and shouting 'Happy Dusshera' on the top of their lungs. Their happy video reminded us of a time when we were free to witness 'Ravana Dahan' in huge gatherings! Take a look at it below:

On October 24, Shilpa Shetty Kundra shared a beautiful video of her daughter, Samisha Shetty's Kanya Pujan. For the Kanya Pujan, the gorgeous mommy, Shilpa Shetty Kundra had gleamed in a green, silk suit and little Samisha had looked cute in a green and maroon ensemble. Shilpa's note could be read as "Ashtami - Kanchika Pooja. On the auspicious occasion of Ashtami today, we were fortunate and blessed with our very own DEVI, Samisha. Her first Navratri, so performed the Kanya Pooja, with her and eight little girls, welcomed with all precautions taken. Our way of paying gratitude to the Supreme Goddess Maha Gauri today and her nine divine forms. This year, however, we masked up and did the Pooja keeping all the safety measures in mind, nevertheless, a beautiful feeling to serve and pamper these little girls. Jai Mata Di. @rajkundra9 @shamitashetty_official. #HappyNavratri #Ashtami #KanchikaPooja #KanjakPooja #blessed #gratitude #DurgaMaa #JaiMataDi."

On the 4th day of Navratri, Shilpa had shared a glimpse of her son, Viaan performing the puja with his mother. From chanting Gayatri Mantra to performing the rituals and saying 'Jai Mata Di' with enthusiasm, Viaan could be seen enjoying the festivity and puja, thoroughly. (Also Read: Allu Arjun Shares Family Photo On Dussehra In Traditional Attire And It's An Epitome Of Family Goals)

Shilpa Shetty Kundra is an epitome of womanpower and an inspiration to a lot of young mothers, as she strikes a perfect balance between her work and family. So much so, that she is often regarded as the 'Supermom'. In an interview with the Filmfare magazine, Raj Kundra had talked about his beautiful wife, Shilpa's motherhood skills, and had called her a 'super mom'. He had said, "She's a supermom! I've seen stars leaving everything to their staff. I feared my baby would have to go with that ordeal but Shilpa is so hands-on. She's up before me and she sleeps after me. She's been getting her hands dirty, changing nappies. I guess motherhood does this to you. Not for one minute have I seen a lazy side to her. She's never complained about not getting enough sleep. She's a good mother." (Don't Miss: Kajal Aggarwal Radiates Pre-Wedding Happiness As She Poses With Her Hubby-To-Be, Gautam Kitchlug)

How did you celebrate Dusshera? Let us know!