Shilpa Shetty Kundra had brought Samisha to their home in the month of March and now, we have got pictures and a video of the baby girl and she looks adorable. Check out the picture inside! 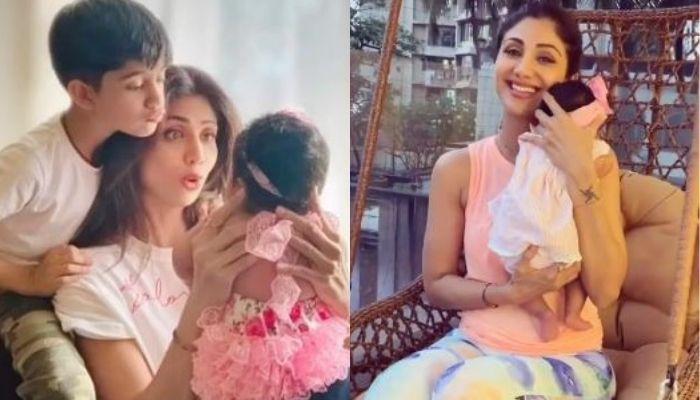 Every parent tries to keep their child away from nazar, and for celebrity parents, the task gets double as they have to keep their kids away from the media attention as well. There are many celebrities, who refrain from showing their baby’s face to the world until a certain age and Shilpa Shetty Kundra is one of them. The actress brought a little angel to her home in the month of April and has been giving partial glimpses since then. However, now we have got a picture of the baby girl and she looks adorable. (Also Read: Mandira Bedi's Adopted Daughter, Tara Tries To Imitate Her Fitness Routine, She Shares A Cute Video)

It was on February 21, 2020, when Shilpa had surprised her fans with the announcement of adding a baby girl into their family. She had taken to her Instagram handle and had posted a glimpse of her baby's little hand and had written, "Om Shri Ganeshaya Namah! Our prayers have been answered with a miracle. With gratitude in our hearts, we are thrilled to announce the arrival of our little Angel, Samisha Shetty Kundra. Born: February 15, 2020. Junior SSK in the house! ‘Sa’ in Sanskrit is “to have”, and ‘Misha’ in Russian stands for “someone like God”. You personify this name - our Goddess Laxmi, and complete our family. Please bestow our angel with all your love and blessings Ecstatic parents: Raj and Shilpa Shetty Kundra, Overjoyed brother: Viaan Raj Kundra."

Now, after 10 months of waiting, we have finally gotten a picture of Shilpa Shetty's little doll, Samisha Shetty Kundra and she is a mushball. Shilpa Shetty is often spotted in the city running errands, however, her visit in the city this time has come with a sweet surprise as she was spotted with her baby girl. As Shilpa had mentioned earlier, her daughter is an avatar of goddess Laxmi. While mommy, Shilpa wore a blue striped shirt with blue denim jeans, she can be seen carrying Samisha in her arms. The baby girl looked as delicate as a flower in her pink sweatshirt and pink floral headband. Take a look at the picture below:

It was after around 15 days of the baby announcement that Shilpa had taken her baby girl home. On March 9, 2020, we had gotten hold of Shilpa Shetty Kundra's pictures with her newborn daughter as she had taken her home with her husband, Raj Kundra and son, Viaan Raj Kundra. The family of four had looked picture perfect and happy as they had posed for the shutterbugs. Shilpa had donned a baby pink dress which was matching with her angel, Samisha's blanket. On the other hand, Raj and Viaan had twinned in a white t-shirt. (Recommended Read: Kapil Sharma Shares A Cutesy Photo Of Daughter, Anayra, Reveals Who Gifted Her First Diwali Outfit)

When Samisha Shetty Kundra had turned seven-month-old, Shilpa Shetty Kundra had given a glimpse of the precious gift that was made when her little girl was seven days old. Shilpa had taken to her IG story to share a picture of a frame, which had hand and feet impressions of her ‘precious miracle of love’, Samisha and thanking lifecasting artist, Bhavna Jasra, the doting mommy had written, “Thank you soooo much @bhavnajasra for this memorable piece that I will cherish for life… Jr SSK was 7 days old when you came and took her impressions. Now she’s completed 7 months. Can’t believe she was so tiny!”

On August 15, 2020, Shilpa's angel, Samisha had turned six months old, and the entire family had celebrated her 'half birthday'. The actress had shared glimpses of her daughter's birthday celebration and had posted pictures of her unique cakes. She had also penned a lovely note for her daughter, which could be read as "One moment they are so tiny, your arms seem too big for them... you blink and they've've outgrown it! As our little angel. Samisha turns 6 months old today. She's's started turning onto her tummy, signs of being ''independent'' already. Soon, she'll'll be sitting up, crawling, and then... my workouts will mainly comprise of running behind her. We'll'll cross that bridge when we get to it, but for now, I'm'm loving this time with her. Watching her grow, crossing new milestones every day is a complete blessing and I'm'm not complaining one bit. Happy 1/2 birthday, our Angel" (Recommended Read: First Glimpse Of Kapil Sharma's Wife Ginni Chatrath Flaunting Baby Bump Amid Second Pregnancy Rumors)

Isn’t Samisha too adorable to be expressed in words?