In one of his last interviews, the superstar of his time, Shammi Kapoor had opened up on his 'hush-hush' wedding with Geeta Bali. Check it out!

Once in a lifetime, we meet our 'perfect partner', who touches our soul and turns us into a better human being. They enter our life for a short time period but leave an impact of a lifetime. And late Bollywood superstar, Shammi Kapoor had a similar love story with Geeta Bali. Shammi is still remembered for his inimitable dance moves and his yahooisms through the 50s-70s. He was hailed as the first superstar of his time and his fashion sense was loved by the entire nation.

Shammi had a super hit career and his love life was no different. He had fallen head over heels in love with the actress, Geeta Bali. The duo had met each other while shooting for Kishor Sharma’s Rangeen Raatein (1955) in the romantic hill station of Ranikhet. When Shammi realised that she is the 'love of his life', Geeta had taken her own sweet time and had rejected multiple proposals from him until August of 1955. But soon, she had melted in front of Shammi and had accepted his love and within four months of being together, they had decided to tie the knot. In a throwback interview with The Quint, the legendary superstar, Shammi bared his heart out on his 'hush-hush' wedding with Geeta. He had shared,

"I did three films with Geeta - Coffee House, Coca Cola, and Mohar. We really liked each other and fell in love. She was a star and I was a nobody, yet she believed in me. I kept proposing to her and after three years, in 1955, we got married, here at Bandra at 4 O' clock in the morning. Saat phere maare, then she took out a lipstick from her purse and gave it to me, "Meri maang mein daal dijiya", she said and that's what I did. It was beautiful. She was a very strong support for me. After her death, I became so reckless and lonely." Shammi Kapoor had talked about the thoughts he had when he had fallen in love with Geeta Bali with Rauf Ahmed for his book, Shammi Kapoor: The Game Changer. The superstar had revealed,

"There were a few question marks. Geeta was a year older to me. She had co-starred with my father Prithviraj Kapoor in a film called Anand Math (1952). She had also worked opposite my brother Raj Kapoor in Kidar Sharma's film Bawre Nain (1950). I was not sure how my family would react to it. But the apprehensions were momentary. I was adamant within myself that it had to be Geeta. She was the woman I was going to spend the rest of my life with. But, ironically, the hurdle was Geeta herself. A pragmatic, down-to-earth woman, she kept cautioning me, 'Shammi, I love you. I can't think of living without you, but I just can't marry you. I can't let my family down. They depend on me. They have nowhere else to go to." In the same interview, Shammi revealed how they had ended up tying the knot. He had said that they lived with four months of agony, tears, cajoling, pleading, separation and desperation. Then one day, the inevitable happened, just out of the blue. On August 23, 1955, Shammi and Geeta were at Juhu Hotel, Bombay. That's when Shammi proposed to Geeta again, knowing she'd shake her head once more and smile. But this time she didn't.

In Shammi's words, instead, she knocked him down and said, "I proposed to Geeta again, knowing she'd shake her head once more and smile. But she didn't. Instead, she knocked me out of my wits. She said, "OK Shammi, let's get married. But it's got to be now." And rest, as we say, is all history. 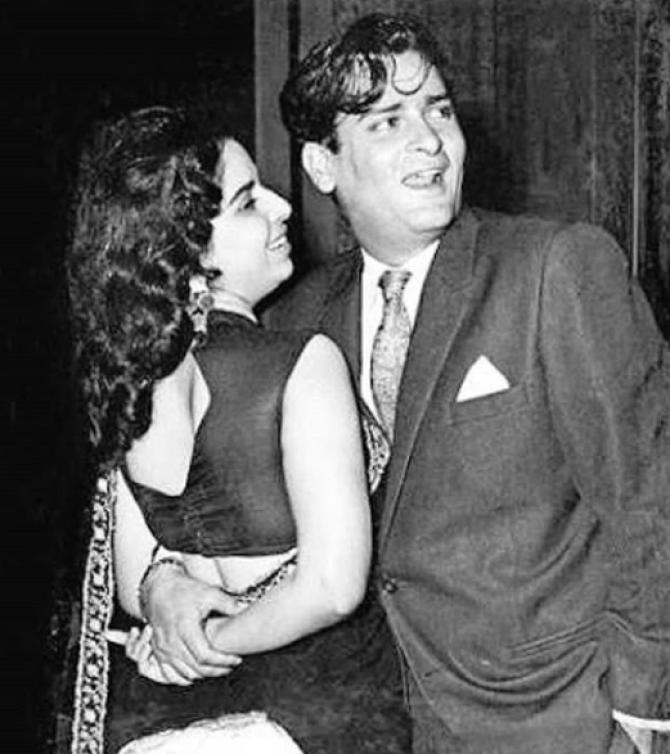 Shammi Kapoor and Geeta Bali had married in 1955. The following year, in 1956, Geeta and Shammi became parents to their son, Aditya Raj Kapoor. In the year 1961, the family of three had gotten completed with the arrival of a baby girl. However, their happiness was short-lived as four years later, Geeta had contracted smallpox while shooting for Rano, a film based on the novella Ek Chadar Maili Si. On January 21, 1965, she had left for the heavenly abode at the age of 34. On the other hand, Shammi had left a beautiful life keeping the memories of his first love alive and at the age of 79 in the year 2011, he had reunited with Geeta in heaven.