Mira Rajput Kapoor attended an exhibition and posted some glimpses from the same. What caught the attention of their fans was a capture of a sculpture, in which Mira tagged her hubby, Shahid Kapoor.

Given the substantial age difference between them, the arranged marriage of Shahid Kapoor and Mira Rajput in 2015 had raised quite a few eyebrows. However, over the years, Shahid and Mira proved that when it comes to love, nothing else matters! One of the most eligible bachelors of B-town, Shahid lost his heart to a Delhi-based LSR graduate, Mira and she stole his surname forever. With a single ‘just married’ selfie which Shahid had captioned with the hashtag, #hitched, he had definitely given goals on how to perfectly end singlehood. (Also Read: Sara Ali Khan Finally Opens Up On Her Relationship Status With 'Crush' Kartik Aaryan)

More than four years into blissful married life, Shahid Kapoor and Mira Rajput Kapoor created their own little world of happiness with two kids, Misha Kapoor and Zain Kapoor. And in the matter of #FamilyGoals, there’s no one who can beat this awesome-foursome Kapoor clan! Shahid leaves no opportunity to express how much he is in love and awe of his gorgeous wife, Mira and January 22, 2019, was no different. Mira had turned muse for the designer, Manish Malhotra’s makeup collection and sharing the first glimpses from her shoot, Mira had captioned the picture as “Let your laugh celebrate your heart!” And just like us, even her husband was awestruck by her look! 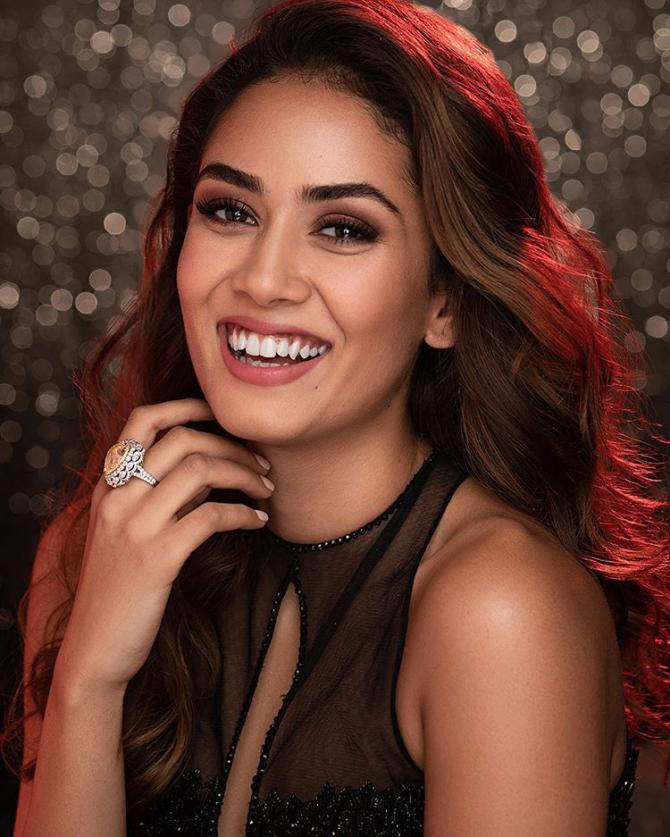 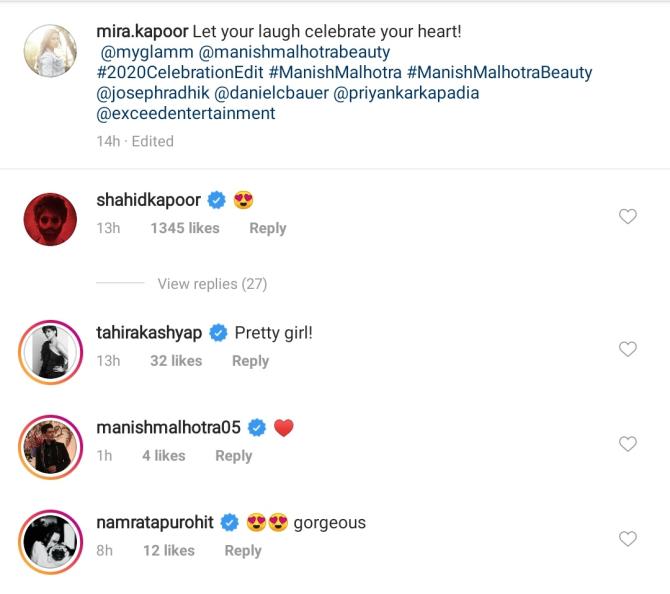 Shahid Kapoor and Mira Rajput Kapoor never fail to make their fans swoon by their mushy captions and social media PDA. On January 31, 2019, Mira attended an exhibition and posted some glimpses from the same on her Instagram handle. What caught the attention of their fans was a capture of a sculpture, in which Mira tagged her hubby, Shahid. Reposting the tagged picture, Shahid wrote, “You are my (heart emoji)” atop it. Aren’t these two, goals? 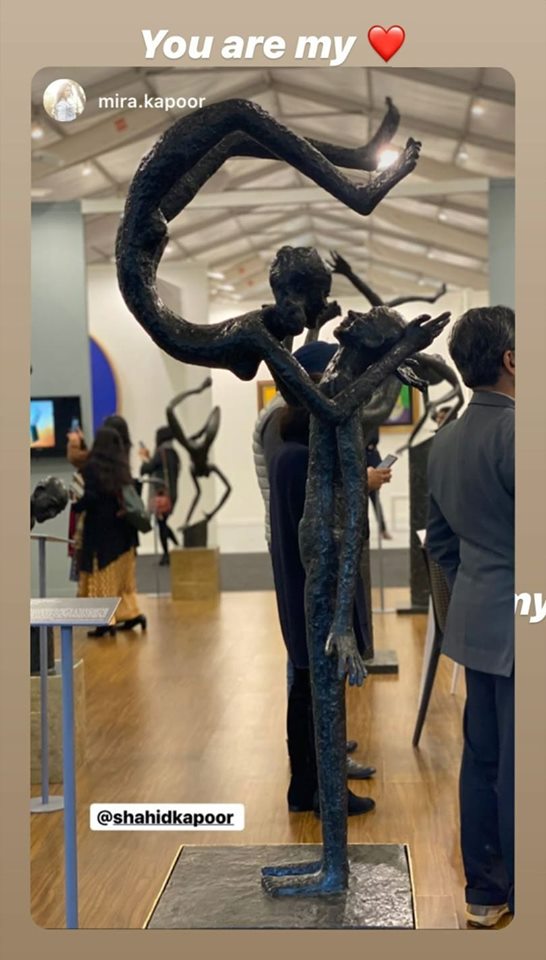 Shahid Kapoor and Mira Rajput Kapoor have always been so much in love that they don’t hold back themselves and, time and again treat their fans a little bit of their PDA! Remember when Shahid and Mira had completed one year of togetherness and Shahid had posted a beautiful photo with Mira on Instagram, sharing their ‘kiss of love’ moment? Shahid had captioned it as "Happy first anniversary my love. @mira.kapoor you are my sunshine." Then on Diwali 2018, Mira had given their fans a glimpse of their ‘us’ moment, wherein the lovebirds can be seen lost in a passionate kiss, which went with the caption, “Only love Happy Diwali!” (Also Read: Saif Ali Khan Asking Friend 'Where Is My Wife' While Looking For Kareena Proves He Is The Best Hubby) Last year in early 2019, Shahid Kapoor and Mira Rajput Kapoor were enjoying their ‘us’ time in London, sans kids Misha Kapoor and Zain Kapoor. From Mira soaking in the sun with windswept hair and sun-kissed selfie to Shahid binging on a large pizza, Shahid and Mira had made the most of their time on the streets savouring scrumptious food and clicking romantic candid photos. Sharing a photo from their vacation of two moreish ice-creams, which she had personified it to their passionate kiss, Mira had written, “This is Us. #noticethekiss.” Sharing another instance when Shahid Kapoor had expressed his feelings on social media for his darling wife, Mira Rajput Kapoor, it was on December 23, 2019, Mira had posted a scenic picture, dressed in a jacket with jeans and sneakers, flaunting her sunshine smile. Mira had captioned her ‘I am on top of the world’ post as “Such a feelin's comin' over me, There is wonder in 'most everything I see, Not a cloud in the sky, got the sun in my eyes, And I won't be surprised if it's a dream, I’m on the top of the world.” Just like we were in awe of Mira’s beautiful picture, her hubby, Shahid Kapoor too couldn’t stop admiring his gorgeous wife. Shahid had commented, “The sun looks pale compared to you” followed by a heart emoticon. Though Shahid Kapoor had made his debut with Aryans’ song, Aankhon Mein Tera Hi Chehra in late 90s, we still can’t forget his quintessential chocolate boy look and just like us, even his wife, Mira Rajput Kapoor couldn’t stop gushing over his early professional days. A few months back, Mira had posted a picture of Shahid, from what it looks like is from his young days maybe early 20s. Sharing a post by Shahid’s fan page in her Instagram story, Mira had taken us back to the time when Shahid was known as the chocolate boy of the Tinseltown. It had surely reminded us of Shahid’s Ishq Vishk days and had made us nostalgic! (Also Read: Neha Kakkar Shoots For A Song With Aditya Narayan Ahead Of Their Rumoured Wedding) Shahid Kapoor and Mira Rajput Kapoor are one of our most favourite couples of B-town, who never shy away from flaunting their love! 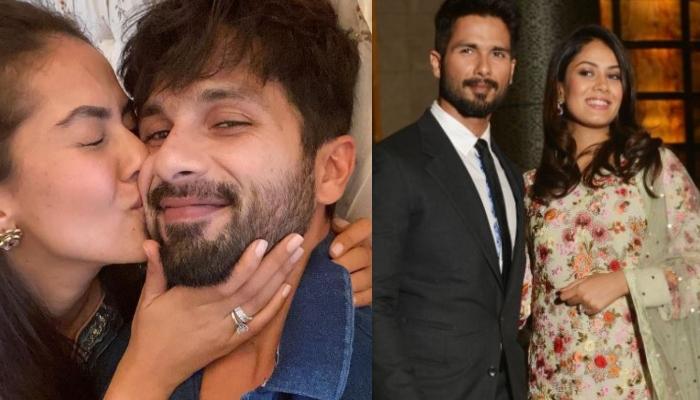 It's the digital age and tagging or sending DMs to your partner in memes, posts and videos is the new way of communication. Though it is different from the conventional way of communication, one must embrace it as it has changed the scenario for the better. As perceived, it does