Shahid Kapoor was one of the most eligible bachelors of the tinsel town, but in 2015, he broke millions of hearts when he announced his wedding with a Delhi-based girl, Mira Rajput. With his killer charm and boy-next-door looks, Shahid was linked to almost all his co-stars before his wedding. While Shahid Kapoor and Kareena Kapoor’s relationship was the most-talked-about one, his affair with Priyanka Chopra remained tight-lipped by the alleged couple. (Also Read: Men In Priyanka Chopra's Life: Wives Of Two Married Actors Stopped Them From Working With Her)

Though their co-starred films, Kaminey and Teri Meri Kahaani didn’t make much at the box office, personally it became special for both the leads, courtesy the blossoming love between them. Neither of them went on record about their affair, and after hanging around for a while, Shahid and Priyanka broke all ties. Now Shahid Kapoor and Priyanka Chopra Jonas have both moved on in their lives with their respective partners, Mira Rajput Kapoor and Nick Jonas, letting bygones be bygones. Why do we say so? Read on! 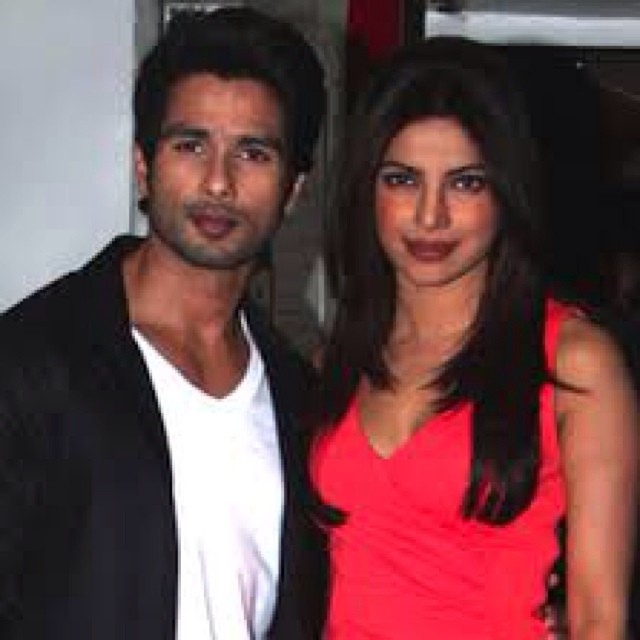 Well, on December 20, 2018, Priyanka and Nick hosted their second wedding reception at the ballroom of Taj Lands’ End, Mumbai, and who’s who from the film industry were invited at the bash. From Katrina Kaif, Salman Khan, Kajol, Rekha, Anushka Sharma, Sania Mirza Kangana Ranaut to AR Rahman, Deepika Padukone-Ranveer Singh, Kartik Aaryan, Rajkummar Rao-Patralekhaa, Raveena Tandon, Hema Malini Saina Nehwal-Parupalli Kashyap, amongst other celebrities graced the occasion. But one ‘unexpected’ couple, who surprised everyone with their entrance was Shahid Kapoor and Mira Rajput Kapoor.

While Shahid looked handsome in a simple black shirt, black trousers with a shiny black blazer which he paired with a pair of black formal shoes, his beautiful wife Mira mesmerised everyone in her light pink coloured saree which had silver intricate detailing all over it. Shahid and Mira were all smiles for the shutterbugs as they posed for them. Rumours were that Shahid and Priyanka, post their break up, are not on talking terms, but they proved it all wrong on Nickyanka’s wedding reception.

And do you remember Priyanka Chopra's Love Story 2050 and What’s Your Raashee co-star, Harman Baweja? Making a rare appearance, Harman too came at his ex, Priyanka's reception and was all smiles for the camera. Reportedly, Priyanka and Harman were in a relationship for over four years, before they called it quits in 2009. Revealing the reason behind the break-up, Harman had stated, "I blame myself. She kept asking me to give her time but I didn't. I couldn't. After two flops, I felt a lot of pressure to do well in my third film. I got too engrossed in it. I got too close to the project. Too involved. In fact, Ashu Sir (Ashutosh Gowariker) used to tell me, 'we are not used to people getting into our space. We don't let any actor do that.' But I crossed all boundaries. I was involved at every stage, every level. What's Your Raashee was very important to me."

In a celebrity chat show, BFFs with Vogue, Shahid had shared that once a famous co-star of his had cheated on him. Was he hinting on Priyanka? In a segment when Neha asked Shahid, “Has anyone ever cheated on you and who?”, Mira instantly interrupted and asked her to rephrase it to, “How many women have cheated on him?” Answering their question, Shahid revealed, “I am sure about one, I have major doubts about another one.” When Neha jabbed him to give names by asking if he is talking about those two famous actresses whom he dated, Shahid refused to take their names. He retorted, “I cannot name them.” (Also Read: 11 Women In Shahid Kapoor's Life: From Kareena Kapoor To Mira Rajput) 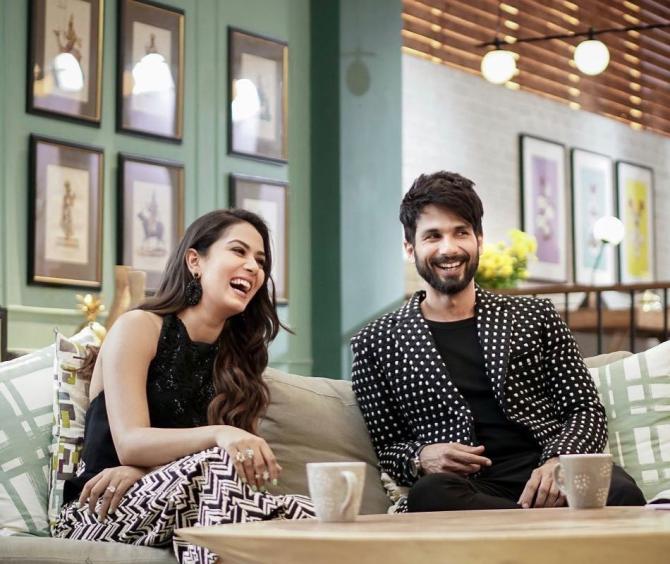 As per a throwback DNA report, in 2011, Priyanka Chopra’s house was raided by the income tax department and she had called Shahid to the rescue. Priyanka had herself revealed the same back then and shared, “Yes, Shahid was there at my apartment when it (the income tax raids) happened. He lives just three minutes away from my home and it was but natural for me to give him a call when all that was happening. My mother was also supposed to be there but she couldn’t make it. So I gave him a call and he rushed to my apartment just as he was (reportedly in shorts).” 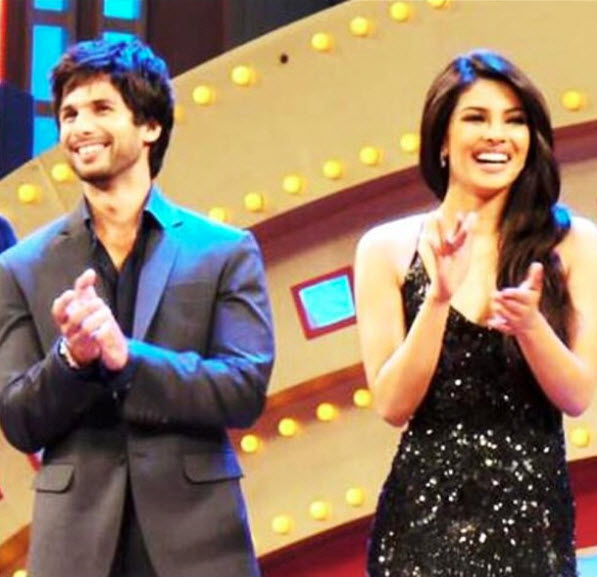 When in August 2018, Priyanka Chopra made her relationship official with Nick Jonas by sharing their roka ceremony pictures on social media handles, the congratulatory messages started pouring in for the couple. During the promotions of Batti Gul Meter Chalu, Priyanka’s ex-boyfriend, Shahid congratulated her for the engagement, and said, "Many, many congratulations to Priyanka and Nick. Marriage is a beautiful thing, I can say that from my experience and I wish her all the best." 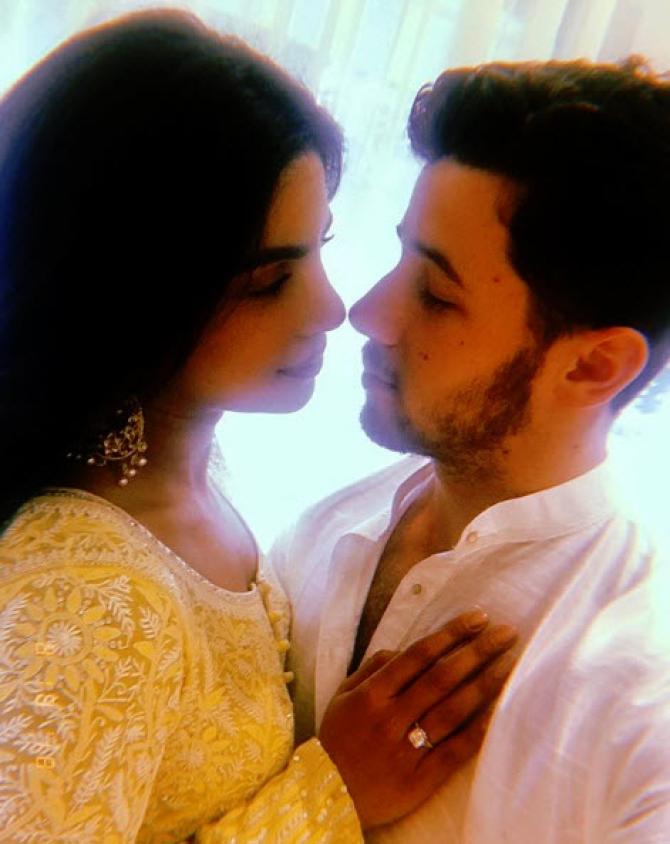 We wish Priyanka Chopra Jonas-Nick Jonas, Harman Baweja and Shahid Kapoor-Mira Rajput Kapoor all the happiness and love in their lives!