Saif Ali Khan is known for his calm and composed nature and his possessiveness for family. Recently, Saif talked about fans frenzy for him, Taimur and Kareena whenever they step out.

Considering that we live in a society that is obsessed with celebrities, the craze that the fans have for celebs is obvious. Sometimes, in the race of getting a picture clicked with a celeb, the fans forget that even celebs have some personal space and it needs to be respected. We have seen people running from one place to another and crowding the celebs at the airport in order to get a picture clicked with him/her. And media and public’s obsession for the Pataudis doesn’t need any special mention. We have witnessed many instances where we have seen fans going crazy either for Sara Ali Khan or Kareena Kapoor Khan. (Recommended Read: Rhea Chakraborty Opens Up About Her Rumoured Relationship With Sushant Singh Rajput)

Whenever the internet sensation, Taimur Ali Khan steps out of his house, he is followed by his fans and media people. He has become paparazzi’s favourite and for one picture of Taimur or with Taimur, people go crazy. The obsession of people for Taimur is understood as he is undoubtedly the cutest star kid on the block. The Pataudi clan is known for their mannerism and calm attitude in every situation. And the Nawab of Pataudi, Saif is known for his calm and composed nature but when it comes to his family and especially kids, he is very protective about them and their security. 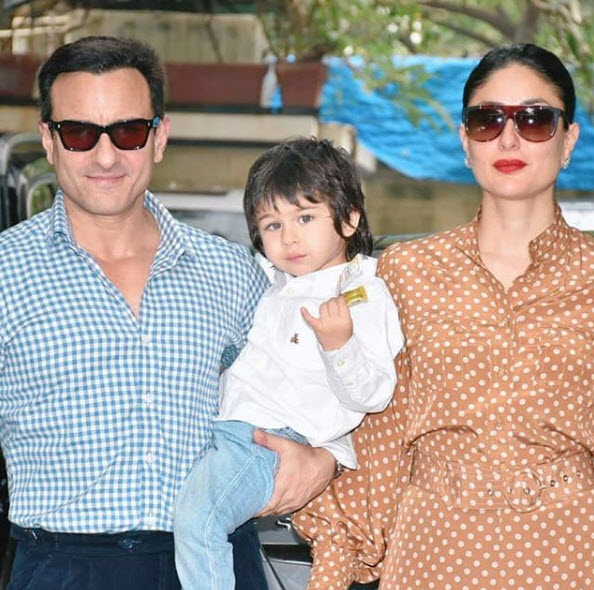 In an interview with the Mumbai Mirror, Saif talked about fans frenzy whenever he, Taimur and Kareena step out from the airport. He said, “One of the worst places to be is a couple of feet behind a Bollywood celebrity because people will trample you, your parent and child, to get a picture. They are not bothered if it’s offensive or intrusive. Maybe I will get some extra security for us at the airport next time because I don’t want anyone stepping on my son. But again, it goes with the territory, that’s what landing back in Mumbai is all about. And given the many advantages to a celebrity’s life, we take it in our stride. Of course, it would have been nicer if it wasn’t there.” 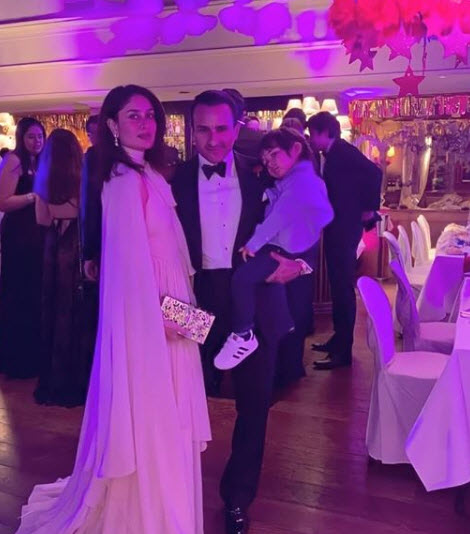 Talking about his family can be brilliant ambassadors for vacation and his thought on making a debut on Instagram, Saif Ali Khan said, “For me, a harmonious situation is when work is balanced with family and friends. I do a film that makes me feel creatively satisfied, then I take off for a bit. I am clear about where I want to be and how I want to live. I can spend an entire evening just staring at the art I have collected. I am not on Instagram yet. I am tempted to jump in but haven’t so far because you can get involved with things that may not always be positive. I imagine I could get a few holidays by advertising where I am and what I am doing though. Kareena, Taimur and I would be brilliant ambassadors for the holidays because that’s what we are doing all the time.” (Suggested Read: Mohsin Khan Speaks On Love And Relationships Amidst His Breakup Rumours With Shivangi Joshi) 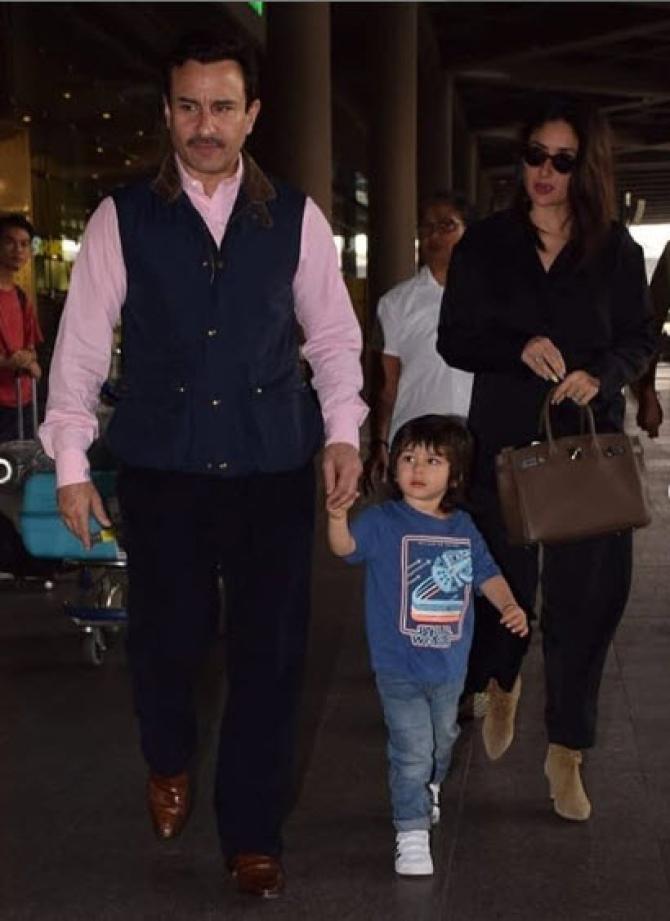 Saif Ali Khan also talked about how he spends time with his family when he is not working. He said, “I like to read, listen to music, I watch movies till late at night because I don’t get started before 8 pm. On a day off, I enjoy cooking. My mother (Sharmila Tagore) spent some time with me and after seeing me cook, is relieved because now she knows I will be alright. After pack-up, I would rather spend time with my wife and family, and occasionally with friends. I have realised I am not very social. I can be if I want to, but with Taimur growing up, I will have to sacrifice his time, and that’s not something I am happy doing.” 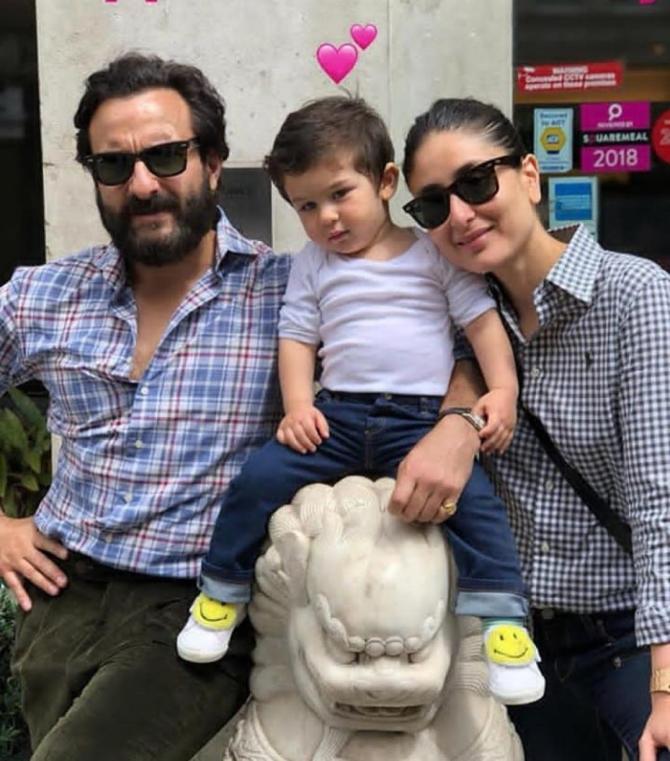 The Nawab of Pataudi, Saif Ali Khan was spotted at the airport with his Begum, Kareena Kapoor Khan and chote Nawab, Taimur Ali Khan on January 12, 2020. After the exit from the airport, the trio was crowded by the fans and followers in the constant demand of pictures with them. Saif, who is otherwise cool with the fans lost his temper and requested them not to click the pictures, but the crowd didn’t give them the way and were constantly touching them and clicking them. A persistent fan was seen walking beside Saif and continuously taking pictures. An irritated Saif had lost his cool and had pulled his arm down before he made his way towards his car. Saif, who was holding Taimur in his arms rushed to the car and on the other hand, Kareena was left behind, as the fans were not giving her the way.

This action of Saif Ali Khan was supported by the netizens and they commented on the video in support of him. Many felt that fans should respect the privacy of the celebs as they too are humans. Some commented that instead of covering them, they should let them walk freely. One of the comments could be read as “Seriously .. People are irritating sometimes ..if he don't want to click any pictures as you can he is carrying his son so it's completely fine, public should respect their privacy.” The other one wrote,  “Why do people behave mad..just give them some space especially when they have there kid in hand." (Must Read: Mona Singh Shares A Video With Beautiful Moments From Her Wedding On Her One Month Anniversary) 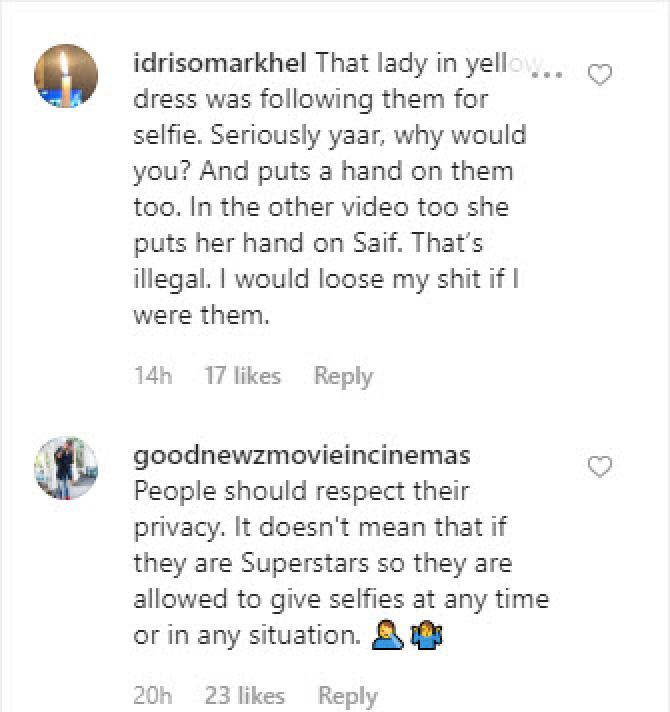 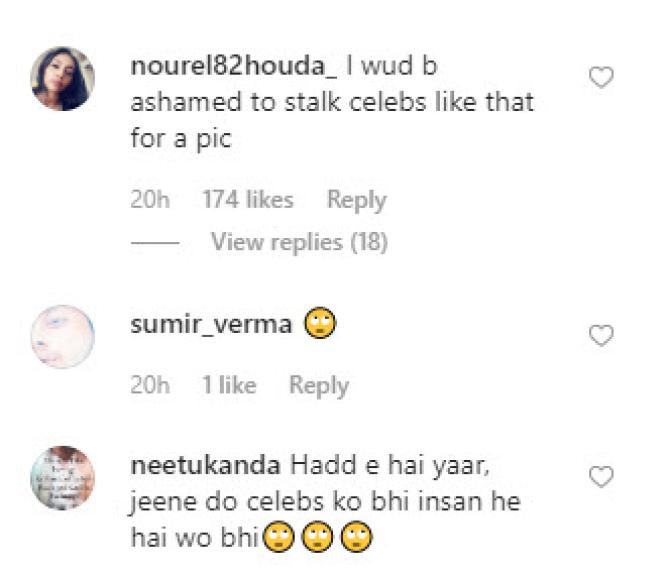 We can’t agree more with Saif Ali Khan’s statement on the safety of his family!