Wearing a Sabyasachi 'lehenga' is like a dream come true for every girl. Here are some brides who donned an orange 'lehenga' on their wedding day.

Ace designer, Sabyasachi Mukherjee’s lehengas are a work of art of textile, philosophy, and creativity. With his unique styles and captivating craftsmanship, the designer has managed to influence the wedding industry. Unsurprisingly, every girl at least once in her life would have dreamt of being a Sabyasachi bride. For the longest time ever, every girl imagines herself flaunting a Sabyasachi lehenga on her D-day when she finally finds her knight in shining armour and vows to live happily ever after in their castle.

Undoubtedly, wearing the elegant and beautiful creations of Sabyasachi on your wedding day is an absolute dream come true. However, millennial brides love to add some twist to their wedding look. From prints to embroideries and crimson red to hues of countless colours, Sabyasachi fulfils all the choices with utmost perfection. So, let’s take a look at these stunning Sabyasachi brides who donned orange bridal outfits at their wedding.

Recommended read: Bride Flaunted A Stone Studded White Lehenga From Her Label, Dazzled In Diamonds On Her 'Nikaah' 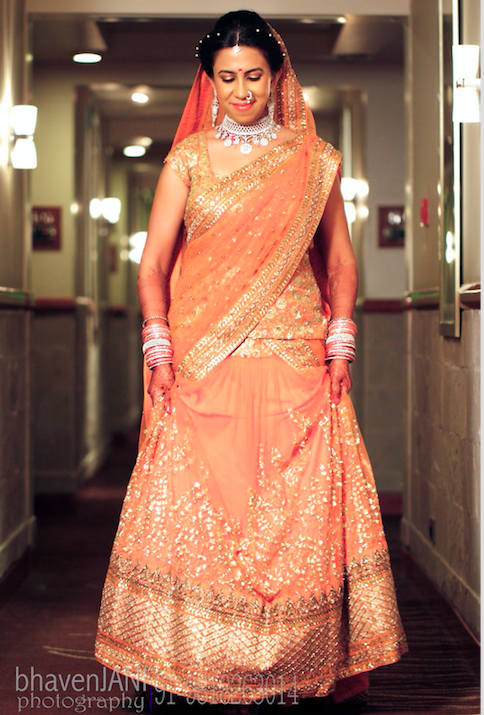 Tanvi Shah had donned a Sabyasachi lehenga with beautiful shades of coral and orange. She had paired it with a long corseted blouse and had looked ethereal. With her perfect-for-summer wedding ensemble, she had opted for a red bindi, a maang teeka, a nath, and a diamond necklace with matching earrings. Her hair was tied in a bun and adorned with beads at the front. She had completed her look with minimal makeup and orange and golden bangles. 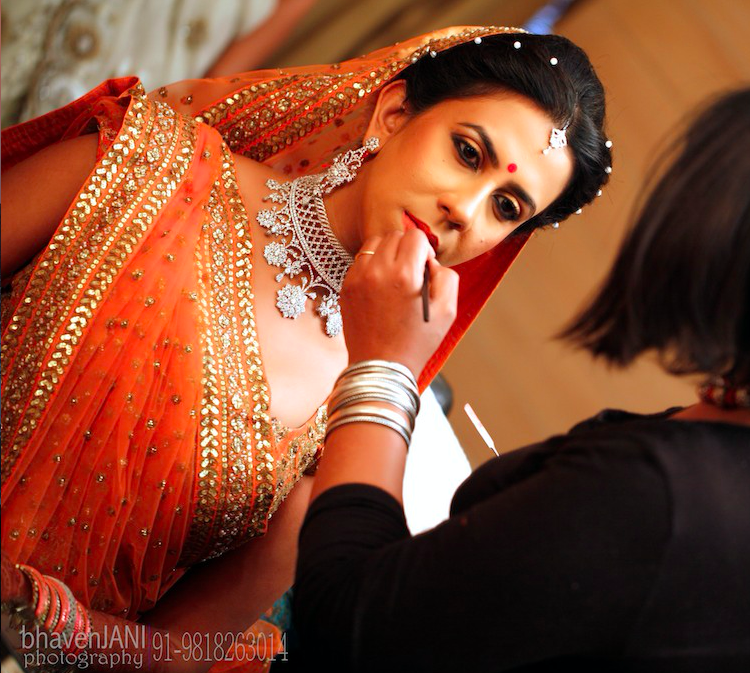 Simran Wanwari had donned a tangerine orange lehenga fused with gold, designed by Sabyasachi Mukherjee. Her vivid orange lehenga was elegant and a visual treat, with its gold threadwork adding an ethereal touch to the outfit. She had skillfully complemented her outfit with delicate jewellery which had included a choker neckpiece and matching earrings, making her look like a queen. Simran had completed her look with subtle makeup with her hair tied in a bun. 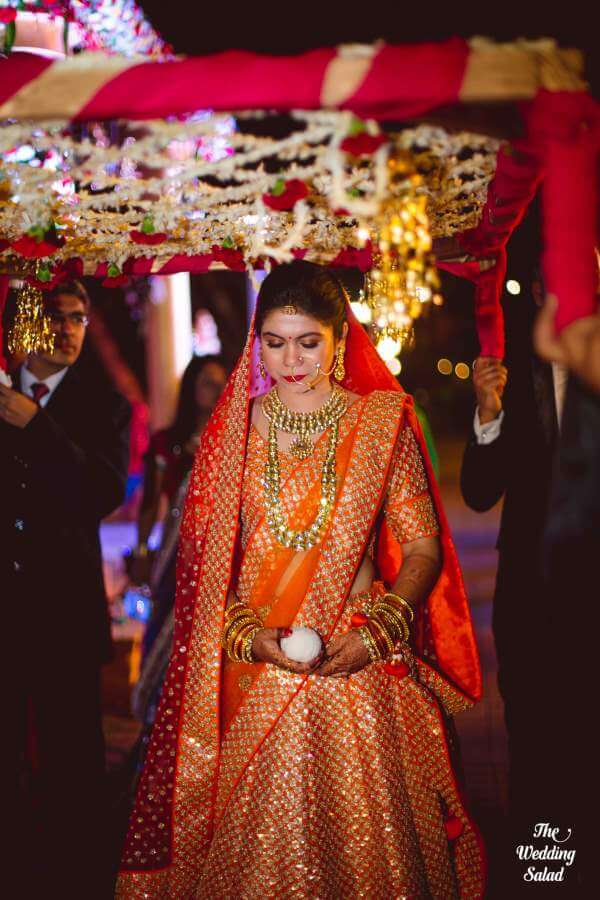 Just like every other girl, Khushboo was in love with the traditional yet classy Sabyasachi wedding lehengas. She had opted for an orange-gold Sabyasachi lehenga, and to break the colour monotony, she had donned a red dupatta on her head. Khushboo had kept her makeup subtle on her wedding, which she had done herself. However, her hair was done by a senior makeup artist of Ojas Rajani, Mumbai. She had accessorised her look with golden jewellery consisting of a choker neckpiece, a maala, matching earrings, and a nath. 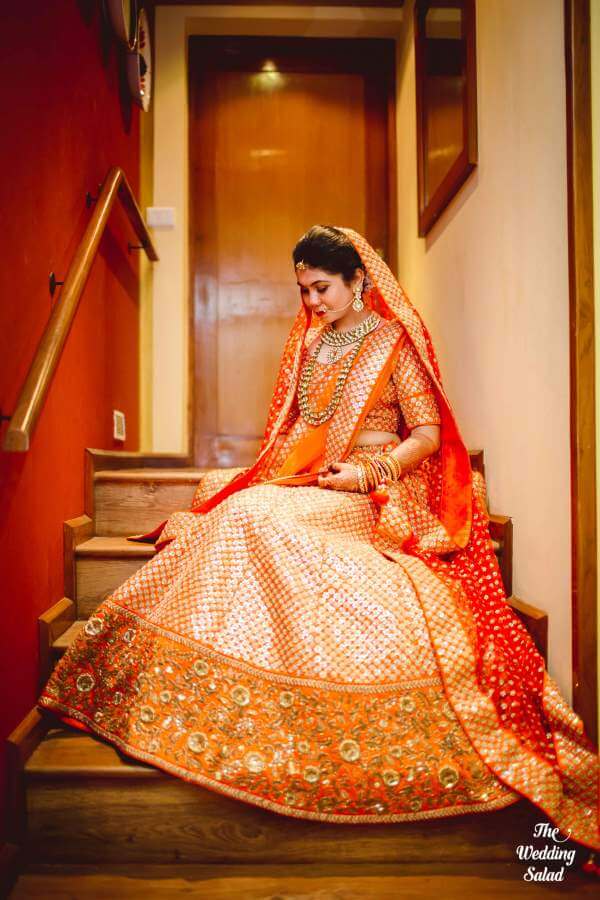 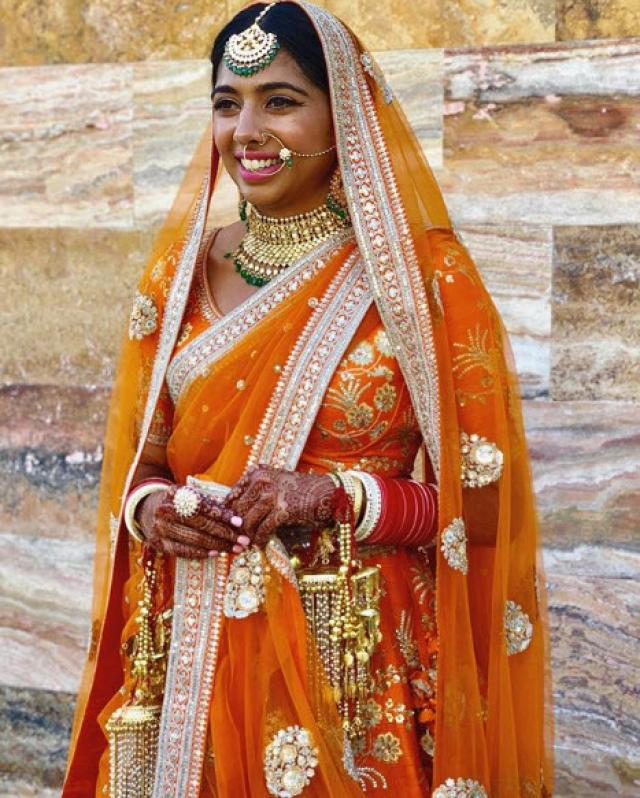 Reema Dutt had looked stunning in her Sabyasachi bridal ensemble in orange with golden embellishments and intricate detailing. The gorgeous bride had styled her look with double dupattas, one draped on her shoulder, and the other kept on her head as a veil. She had accessorised her look with a golden-green choker, maang teeka, matching earrings and nath. She had kept her makeup as minimalistic as possible.

Also read: This Sabyasachi Bride Opted For A Green 'Lehenga' And Royal Jewellery For Her D-Day 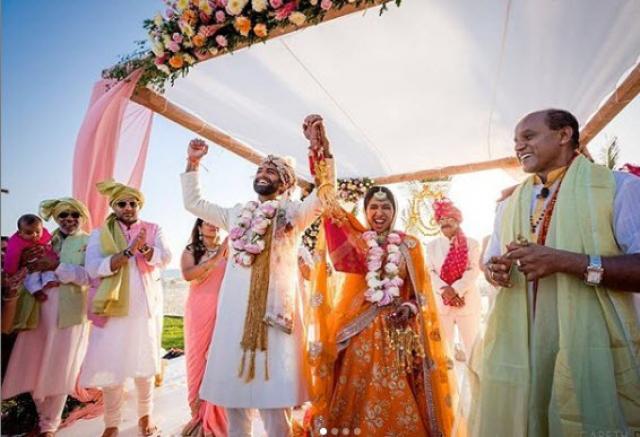 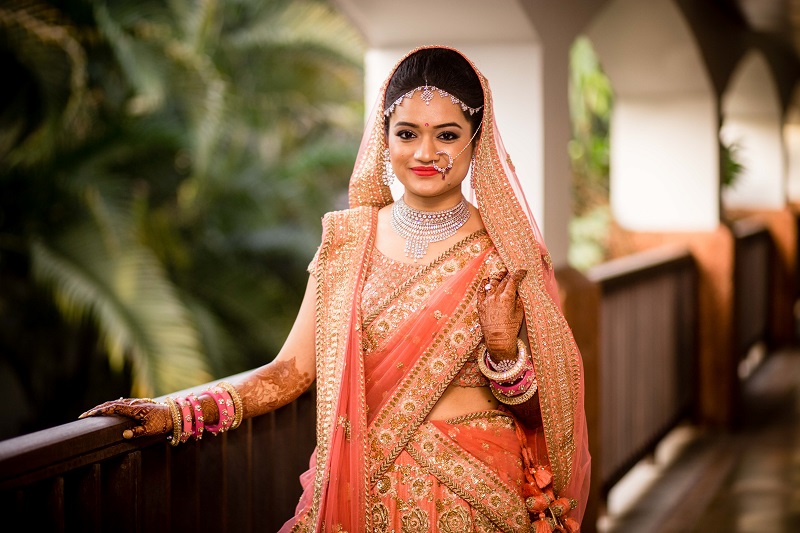 The Sabyasachi bride, Devanshi, had also strayed away from traditional bridal colours and had opted for an elegant coral lehenga ornamented with heavy golden work. And when we talk of her accessories, she had nailed it there too! She had paired her wedding ensemble with a diamond necklace, a maatha-patti, a nath and a small bindi. She indeed had turned heads at her wedding with her mesmerising look. 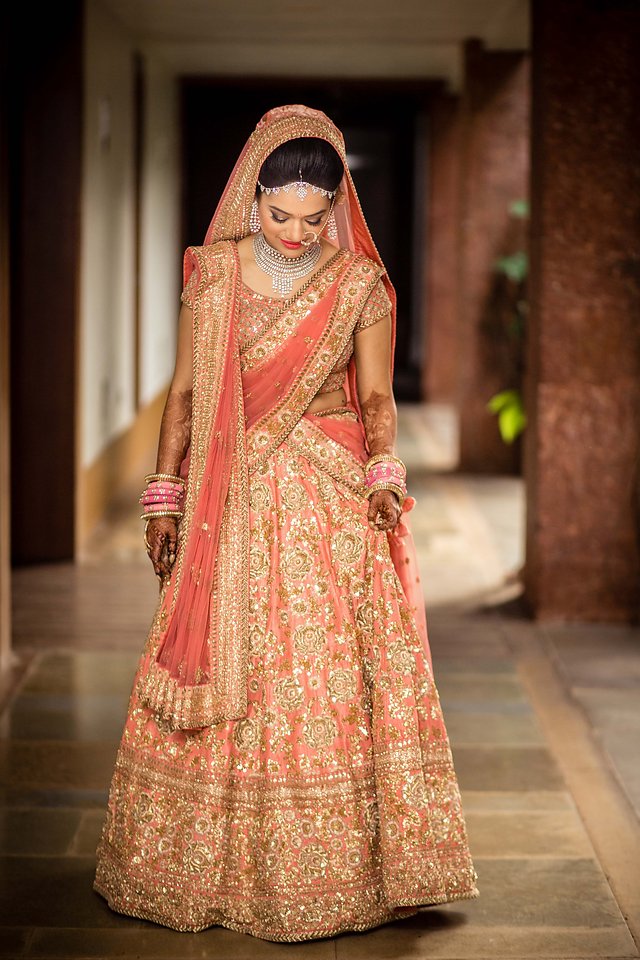 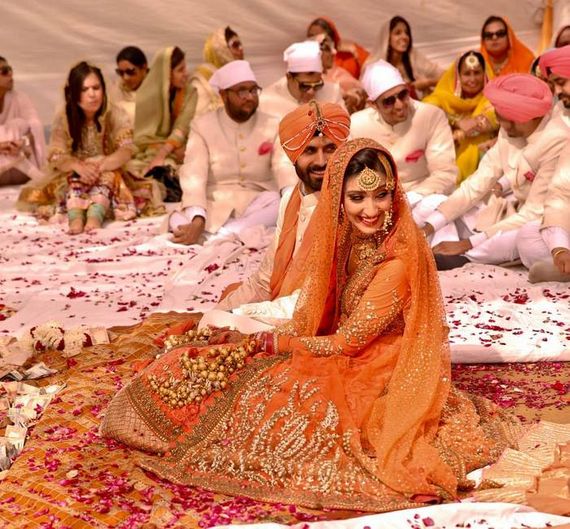 The Sabyasachi bride, Shirin proved that you can wear a jacket even on your D-Day and still look like a super-stylish bride. She had opted for a heavy embellished orange and gold Sabyasachi jacket lehenga. Shirin had preferred to keep the colour of the jacket and lehenga similar and had kept a matching dupatta over her head. The gorgeous bride had accessorised her look with a golden choker, matching earrings, a pasaa, a big maang teeka, a nath and golden kaleeras. 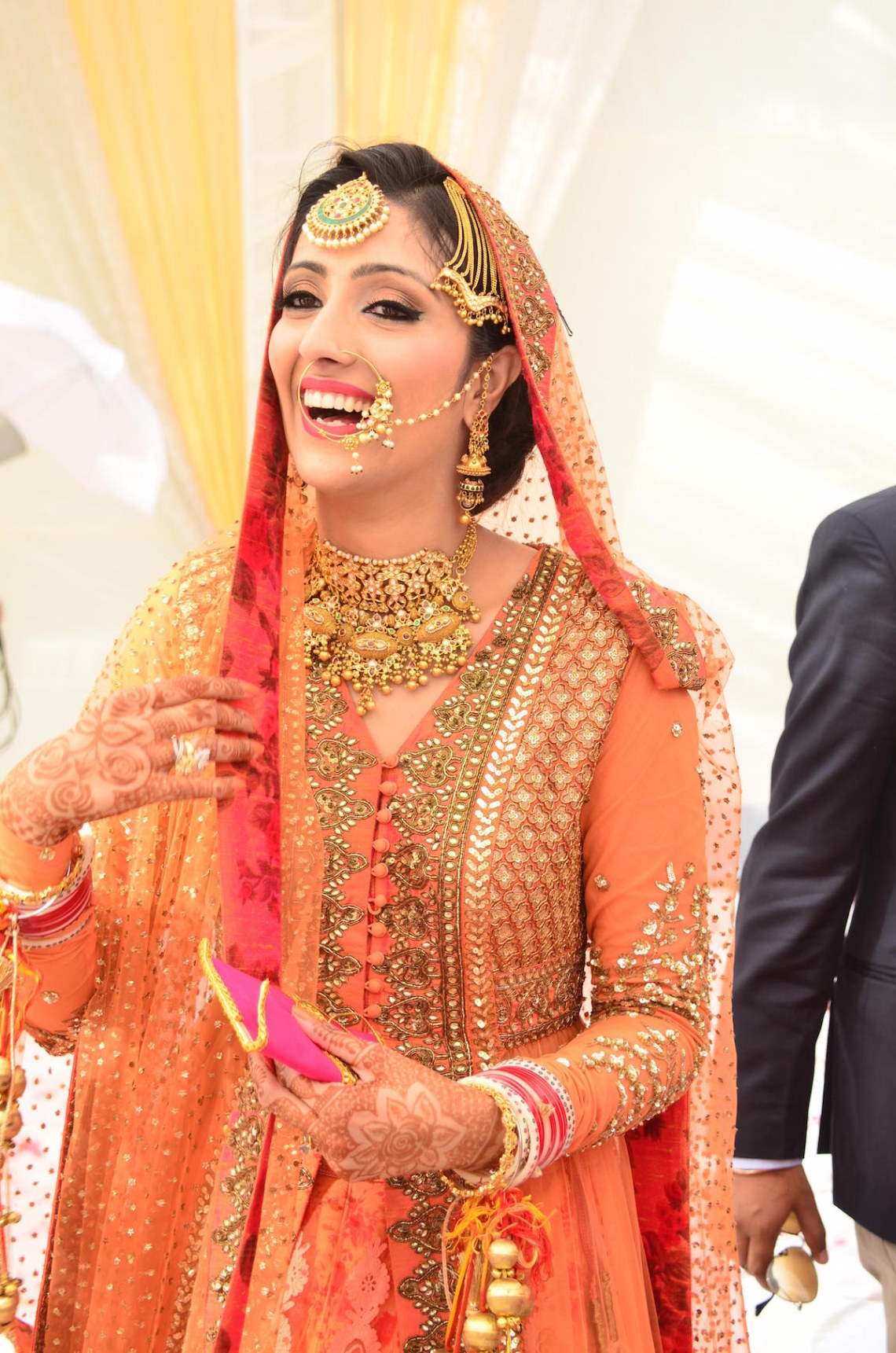 The Sabyasachi bride, Akhila Reddy had donned an orange lehenga with golden floral embroidery on it, on her D-Day. The gorgeous ensemble had minimalistic gotta-patti work on the border of its lehenga and dupatta, which gave her attire a royal look. The bride had kept her look minimal with her hair tied in a braid. She had opted for a pearl maala, a silver and emerald choker neckpiece with matching earrings, and a maang teeka.

Also read: This Bride Aced Royal Marwari Look In A Unique Lehenga For Her Destination Wedding In Jaipur

The Sabyasachi bride, Renita Ahluwalia had flaunted floral print lehenga and had looked perfect as she flaunted a splash of flowers all over her. She had teamed her lehenga with a golden full-sleeved heavily embellished blouse. Renita had kept her look minimal and had accessorised it with a pearl neckpiece, a small maang teeka, and a pair of earrings.

The Sabyasachi bride, Barkha had worn a unique orange coloured lehenga, which was heavily embroidered with golden floral patterns, along with a matching semi-sleeved blouse. The outfit had broad golden-sequinned borders attached at the ends. Barkha had draped a net dupatta with gotta-patti work, over her head. She had completed her look with heavy jewellery which had included a maang teeka, nath, earrings, a three-layered neckpiece and a stone-studded choker. The bride had looked extremely elegant as she donned golden coloured bangles along with kaleeras in her hands.

The next bride, Anisa Seth had opted for an orange Sabyasachi lehenga with a double dupatta. In addition, she had opted for a net dupatta with golden work, on her head and a matching net dupatta with embroidered borders draped over her body. The bride had accessorised her wedding look with a broad choker, a maatha patti, a simple nath, matching earrings, chooda and a long neckpiece. Moreover, she had opted for a nude makeup look with smokey eyes and a floral bun, and had looked perfect as she made her appearance at the wedding.

Sabyasachi Mukherjee is indeed a magician who turns women’s dream weddings into reality with his signature designs!