Television actress, Rubina Dilaik's husband, Abhinav Shukla shared a picture from her birthday celebrations, and it'll tickle your travel-bone for sure. Take a look! 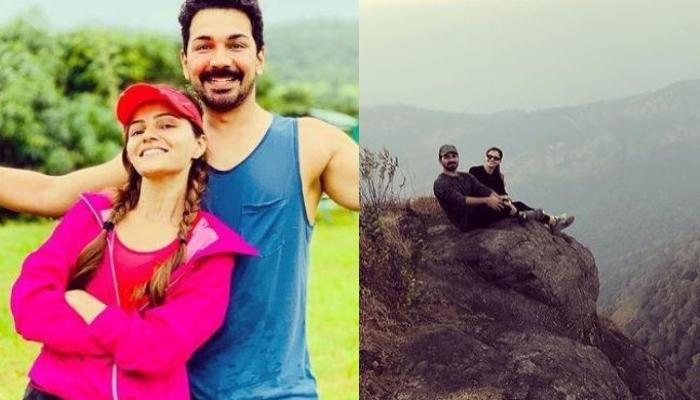 It was in the year 2018 when one of the gorgeous actresses and the heartthrob of the television industry had decided to hold their hands forever. Yes! We are talking about popular show, Choti Bahu-Sindoor Bin Suhagan fame actress, Rubina Dilaik and Silsila Badalte Rishton Ka actor, Abhinav Shukla, who had walked down the aisle on June 21, 2018, in Shimla at the heritage Woodville Palace. The lovebirds had gone for an intimate destination wedding, and it was classy and royal. Since then, we are gazing at their perfect romantic pictures and adorable videos. (Recommended Read: Saif Ali Khan Feels Blessed To Have Got Mother Sharmila Tagore's Genes And The Reason Will Amaze You)

Well, both Rubina Dilaik and her husband, Abhinav Shukla are spending time with their family and loved ones right from the starting of nation-wide lockdown. And, the family celebrated Rubina's birthday on the mountains under the bright blue sky, and the pictures will surely tickle your travel bone. Scroll down to take a look! 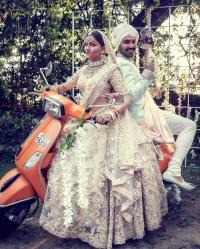 On August 27, 2020, popular television actress, Rubina Dilaik celebrated her birthday with her family, and it was her husband, Abhinav Shukla, who shared a glimpse of it on his Instagram handle. The doting husband and actor shared a beautiful picture from his wife's outdoor birthday celebrations on the hills under the bright blue sky and the frame looks dreamy from all angles. In the photo, we can see Rubina hugging Abhinav, while other members of her family pose for the camera. Along with this cutesy picture, Abhinav wrote a small caption thanking all the people involved in the preparation of this birthday surprise party, and it can be read as "Ruby ka Outdoor Birthday ! With @jyotikadilaik @rajatsharma_rj @kudratbhandari, Anu, Dhruppal and Sonu!" Also, Rubina dropped a one-word comment "blessed" on Abhinav's post. Take a look. 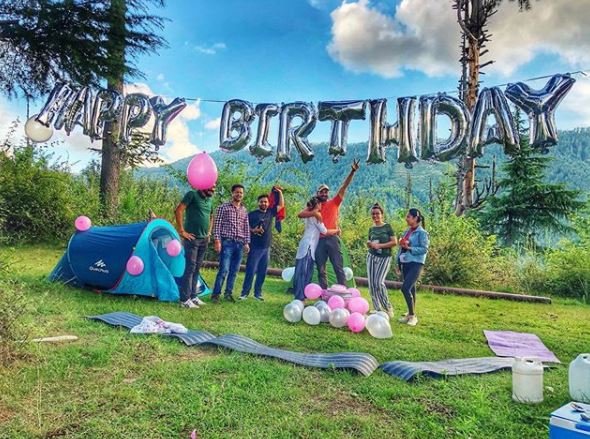 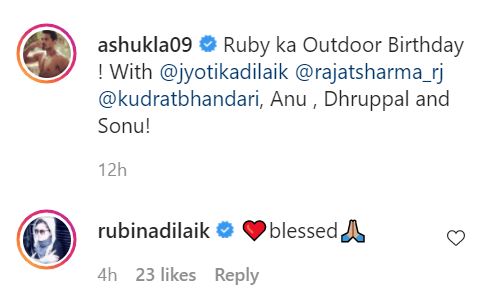 Well, many hours later, Rubina also took to her Instagram handle and posted a beautiful picture from the birthday celebrations in order to thank everyone for this big surprise. Along with the picture, Rubina wrote in her caption that she's blessed to have all of them and it can be read as "Thank you for all the love and effort for making my birthday so so Special #grateful." Also, a lot of fans and reports are speculating that Abhinav adopted a Rottweiler puppy and gifted the four-legged-baby to his wife, Rubina as a birthday present. (Don't Miss: ahira Kashyap's Sister-In-Law, Aakriti Ahuja Praises Jethani For Her Writing Talent, Latter Replies) The reason why speculations are going on is the fact that on August 26, 2020, Abhinav Shukla had taken to his Instagram handle and had posted a picture of himself holding a small puppy in his hands. The actor had written a caption and had revealed that puppy's name is Leo. His caption could be read as "My new friend, LEO." After which, Rubina had also posted a cutesy picture with the little fur-baby. Along with the adorable picture, Rubina had written a caption and had revealed that Leo is adopted and not purchased. Her caption could be read as "Thank you, everyone, for YOUR wishes and blessings. We feel blessed to share OUR CHERISHED moments of our new FAMILY member.... our new #love. We have adopted LEO." Take a look. A few months ago, in an Instagram live chat with ETimes TV, Rubina had candidly spoken about her relationship with her husband, Abhinav. She had talked about exploring new things in their relationship. In her words, "This period has been an intimate time with me. I am really working towards getting to know myself and my relationship with Abhinav. I am giving my home a touch of my own. Can't tell you how time flies away. I have been busier than ever. I used to think that shooting for 10-12 hours and then travelling for 3-4 hours is too much. But now I feel managing household duties are more difficult. Now I realise how grateful we should be to our mothers and our house-helps. This period has been an eye-opener." We agree with you. (Also Read: Tanya Madhvani Talks About Mom, Mumtaz's Stardom, Pregnancy Difficulties, And Life After Marriage)