TikTok star, Riyaz Aly revealed his relationship status with Avneet Kaur and revealed his dream of working with this Bollywood actress in future. Find out!

In today’s world, all you need is talent and the knowledge to present in front of millions and billions of people out there. The biggest disadvantage that the generations before us had faced is the lack of audience and exposure. And this generation is simply blessed with it in abundance, if you have talent, then there’s no stopping, and all you have to do is keep your spirits high. To understand it better, let’s bring in the teenage sensation and already an inspiration for many, popular TikTok star, Riyaz Aly. This little charming teenager is just 16-year-old, but you’ll be surprised to know that he holds a fanbase of 37.2 million followers on TikTok. (Recommended Read: Asim Riaz Popped The Question To Girlfriend, Himanshi Khurana With A Stunning Diamond Ring Already?)

The charming Riyaz is famous for his acting skills, but in the last few months, his relationship rumours with Avneet Kaur are ruling the internet. However, the young star has talked about them in his recent interview. Recently, in an interview with the ETimes, famous TikTok star, Riyaz Aly talked about his equation with Avneet Kaur, as there are numerous rumours about them being in a relationship. However, the star clarified it and said, “We are good friends and it is always fun working with her.” Going forward he also revealed that working in Bollywood is his biggest dream and will take the chance if given in future, he said, “If I get any opportunity in Bollywood which will be a dream come true for me, I shall let you know!” When asked about which Bollywood celebrity he dreams of working with. The actor immediately says the name of Bollywood diva and Love Aaj Kal actress, Sara Ali Khan. (Don’t Miss: Sunny Leone Shares Glimpses Of Her 'Family Art' With Hubby, Daniel And Kids, Nisha, Asher And Noah) As we all know that Riyaz Aly is a big fan of acting and this is the reason why he chose TikTok to showcase his acting skills. Thus, no wonder he’ll try his best to get into Bollywood. Coming back to his relationship rumours with Avneet Kaur, then there’s no doubt that the actor has clarified them too with his strong answer. Also, it seems quite understandable because Avneet Kaur has been linked with her television show, Aladdin – Naam Toh Suna Hoga’s co-star, Siddharth Nigam since a very long time. On March 21, 2020, Avneet Kaur had taken to her Instagram handle and had posted an adorable picture with her rumoured beau, Siddharth Nigam. In the picture we can see, Avneet looking stunning in her animal print dress as she hugs Siddharth from behind. On the other side, Siddharth is looking dapper in his blue t-shirt as he had posed with all smiles to the camera. However, the thing that caught everyone’s attention was Avneet’s caption that can be read as “Main forever @thesiddharthnigam #Sidneet #Alasmine #GoodTimes Wearing- @periwinkley_shop.” In the comments section of the picture, the netizens were quick to pay attention to the ‘Main’ word. Take a look. (Also Read: Shah Rukh Khan's Daughter, Suhana Khan Secretly Captured Grooving And Singing Eminem's Song, Watch) 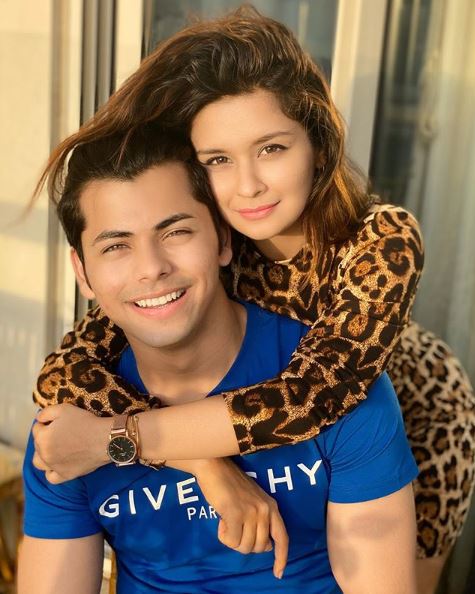 Do you find Riyaz-Avneet’s chemistry better than Siddharth-Avneet’s? Let us know!