This Ganesh Chaturthi, when the world is standing on the brink of a major climate change, Riteish Deshmukh gave a beautiful message by teaching his kids how to make an eco-friendly Ganesha!

Riteish Deshmukh and Genelia Deshmukh are hands down the cutest couple of the glamour world. The couple oozes love and warmth for each other even after two decades of being together (ten years of dating and eight years of marriage). The couple had tied the knot on February 3, 2012, and it was a star-studded affair. The cute, bubbly, Genelia Deshmukh had embraced motherhood for the first time in November 25, 2014. And in 2016, Riteish and Genelia had completed their family as Riaan was promoted to 'big brother' with the arrival of Rahyl Deshmukh. Since then, Riteish and Genelia are riding high on parenthood. (Recommended Read: Samantha Akkineni Shares Photo With Hubby, Naga Chaitanya In Traditional Attires And 'It's The Best')

Unlike other star kids, we don't see much of Riaan and Rahyl in the media as the doting parents like to keep their kids away from the paparazzi. But this Ganesh Chaturthi, when the world is standing on the brink of a major climate change, Riteish Deshmukh gave a beautiful message by teaching his kids how to make an eco-friendly Ganesha. Scroll down to check out the video!

On the occasion of Ganesh Chaturthi, Riteish Deshmukh took to his IG handle and shared a video of his kids, Riaan and Rahyl indulged in making a statue of Lord Ganesha from newspapers, and it's the cutest Ganesha you'll see today! While Riaan and Rahyl were busy making their Ganehsa, the doting daddy, Riteish was seen helping and guiding them. Check out the video:

On July 29, 2020, Riteish Deshmukh had shared an adorable video of his son, Rahyl composing a song. When Riteish had asked Rahyl what he was doing, he had answered him that he was making a long song. Rahyl had then gone on to tell his baba that the song will be featured in a film directed by his cousin, Diviyaana, who was sitting next to him. Introducing the kids to music composer, Vishal Dadlani and Shekhar Ravijani, Riteish had written, “Dear @vishaldadlani & @shekharravjiani -Do you see any future here? Quarantine Music Composition is in full swing. Musical Maestros Rahyl & Diviyaana.”

Some time ago, Riteish had shared an adorable throwback picture with his kids, Riaan and Rahyl from one of their vacations, wherein he could be seen lifting them in his arms and flexing like a superhero. He had captioned the picture as "My Super Powers !!!! Riaan & Rahyl." Check it out below. (Also Read:  Sargun Mehta Pens A Heartmelting Note For Hubby, Ravi Dubey As He Completes 15 Years In The Industry) 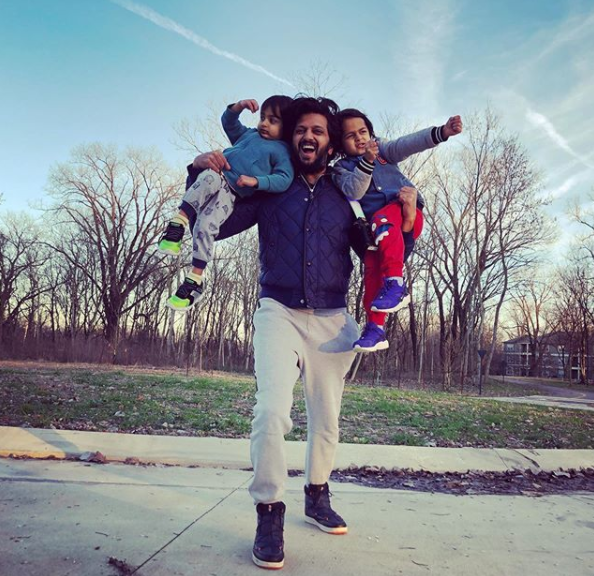 On August 5, 2020, the very beautiful, Genelia Deshmukh had turned 33 and her Husband, Ritiesh Deshmukh had made her realise how special she is to him. Taking to his IG handle, Ritiesh had shared a picture with his ‘baiko’ in which he could be seen kissing her on the forehead as she had flaunted her biggest smile. Along with the adorable picture, Ritiesh had penned down a note, baring what his wife means to him. His caption could be read as “You are my bestest friend, my eternal laughter, my partner in crime, my happiness, my guide, my enthusiasm, my excitement, my light, my life, my everything. Wishing you a very Happy Birthday Baiko - growing young with you is a blessing. @geneliad #HappyBirthdayGenelia.” On February 3, 2020, the 'IT' couple of Bollywood, Riteish Deshmukh and Genelia Deshmukh had completed eight years of marital bliss. To mark their eighth anniversary, Genelia had posted a video that had comprised of their beautiful moments together and had written, “Dearest Forever, Grow old along with me, I promise the best is yet to come. Happy Anniversary @riteishd Just to let you know I Love being my Husband’s wife #since2002.” Riteish had also posted a hilarious video on his Instagram handle and had captioned it as "Happy Anniversary Baiko @geneliad." (Don't Miss: Priyanka Chopra Jonas Misses Ganesh Chaturthi Celebrations With Her Dad, Ashok Chopra, Shares Photo)

How did you make your Ganesha?