It was Riteish Deshmukh's birthday on December 17, 2020, and we stumbled across a cute video from the celebrations. Check it out inside!

The year 2002 had witnessed the maiden voyage of a beautiful love story, the one we still look up to even after 18 years! Genelia and Riteish had met on the sets of Tujhe Meri Kasam and had embarked on the journey of their 'happily ever after' on February 3, 2012. Since then, we are witnessing the amazing tale of love with Riteish and Genelia's lovely gestures for each other, which, time and again, reinstate our faith in love! (Recommended Read: Preggar, Anita Hassanandani Shares A Photo Of Her 'Shagun Ki Mehendi' With Hubby, Rohit's Initials)

In an interview with Pinkvilla, Genelia Deshmukh had revealed the secret of her happy married life and had said, "I have to complement Riteish for that because he doesn't make any issue. We don't fight, we only fight when I want to fight. He won't get into the nitty-gritty of issues, sometimes I feel I want that to happen because I am a different person. But he lets me be. I think in all of that, we found the rhythm of communication." 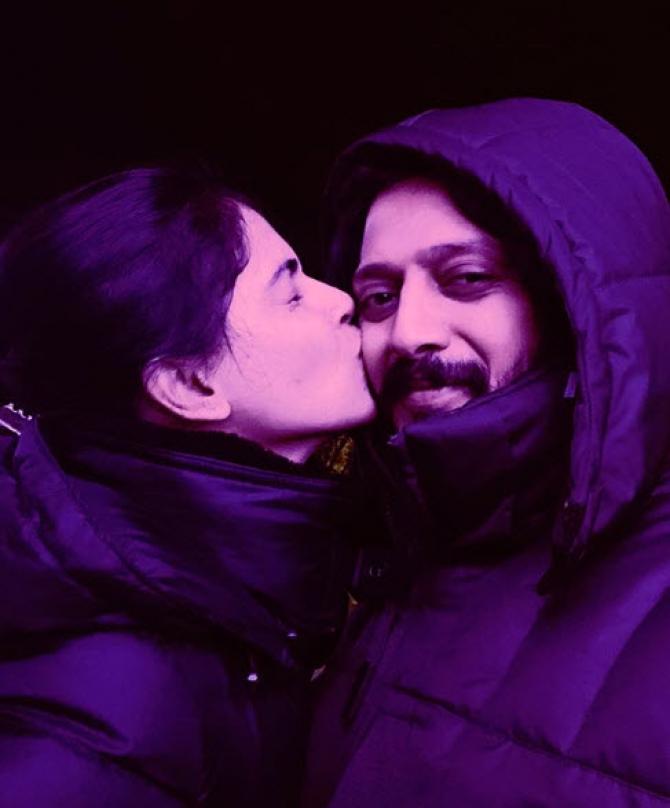 It was Riteish Deshmukh's birthday on December 17, 2020, and we stumbled across a cute video from the celebrations. In the video, Riteish can be seen happily cutting his cake while his friends and family sang 'Happy Birthday' for him. Genelia was sitting right beside Riteish and his adorable gesture for his 'baiko' totally won our hearts. As soon he cut the cake, Riteish immediately pulled his wife closer and squished her with a loving hug. Check out the video below:

Riteish and Genelia had appeared on The Kapil Sharma Show and had talked about their love story and married life. During the show, the host, Kapil Sharma had introduced Riteish hailing from a political family and had asked him whether the couple had taken pheras or oath on their wedding. Giving a hilarious response to Kapil, Riteish had said, “Phere liye they. Wo kya hota hai na, jab aap shapath lete ho to wo paanch saal ki sarkar hoti hai, paanch saal me badal jati hai.” Earlier, in a joint interview with the Hindustan Times, Genelia and Riteish had opened up on their married life. During the interview, Riteish had shared that he has asked his wife, Genelia to ask him only 10 questions in a day, and her quota ends in the morning within five minutes. To this, Genelia had stated, "I ask whatever I need to ask, he can reply or not, that’s his choice. There is a saying, ‘happy wife, happy life’, and he knows that very well." (Also Read: Inaaya Naumi Kemmu Writes A Letter To Santa, Mommy, Soha Ali Khan Shares A Cute Picture) In an interview with The Times of India, Riteish and Genelia had talked about their first meeting. He had shared, "I was flying to Hyderabad for the test shoot of Tujhe Meri Kasam and I was told that the girl opposite me would be there. I walked out of the airport and met Genelia’s mom. Then I saw this tall girl looking in the opposite direction, completely ignoring me. I was like, ‘Why is she behaving like this?’" To which, Genelia had interrupted and had said, "I did say, ‘Hi!’ I’d found out two days before that he was the Chief Minister’s son so I assumed he was a spoilt brat, a typical politician’s son, so I thought I’d give him attitude before he did! (laughs) Otherwise, I am shy and reserved by nature." In a throwback 2014 interview with the Tribune, Riteish Deshmukh had spoken beautifully about his wife, Genelia Deshmukh. He had stated, “She acted with me in my first film. We first became best friends and then midway through the film, we started seeing each other. We were seeing each other for 10 years before we decided to get married in 2012. Genelia and I are one entity. Falling in love with your friend and that becoming your life is the best thing that can happen to a person. I love her energy and her smile." (Don't Miss: Mira Rajput Kapoor Shows Her Postpartum Belly After Her Son, Zain's Birth With A Throwback Picture)