South Indian actress, Rashmika Mandanna shared a series of pictures from her childhood bestie, Raaginii Muddaiah's wedding and the 'Pushpa: The Rise' actress rocked a Coorgi style saree at the event.

South Indian actress, Rashmika Mandanna is often referred to as the 'national crush of India', as the actress holds a gigantic fan following across the county. Every year on April 5, 2021, Rashmika's massive fans celebrate the 'National Crush Day', on her birthday to show their immense love for the actress. Rashmika is famous for her contribution to the Telugu and Kannada cinema with her hit movies like Anjani Putra, Yajamana, Kirik Party, Geetha Govindam, Bheeshma, Pogaru, Sarileru Neekevvaru and many more.

Apart from her professional success, Rashmika Mandanna remains in the headlines for her fashion quotient, as every now and then, she stuns everyone with her breathtaking glamourous looks and lovely outfits. Once again, she stunned everyone as she styled a Banarasi saree in the famous Coorgi style. On May 16, 2022, Rashmika Mandanna took to her Instagram handle and shared a series of pictures from her childhood sweetheart, Raaginii Muddaiah's wedding. The actress was one of the bridesmaids and looked simply out of this world as she had looked stunning in a mustard yellow-coloured Banarasi silk saree. However, what made heads turn was the way, Rashmika draped the saree as she went for the traditional Coorgi style, and it simply multiplied the beauty of the Banarasi saree. In the pictures, Rashmika can be seen donning an elegant necklace, white heels, a sleek ponytail, a lovely wristwatch and minimal makeup. Along with the pictures, Rashmika narrated how she managed to reach her BFF's wedding in the long note, and an excerpt from the same can be read as:

"Today my friend @raaginimuddaiah got married.. (and I don't have a picture with her from today) but I wouldn't have missed it for the world! After missing a 4 AM flight and having my flights delayed 4-5 times.. thank god, I finally made it to her wedding! And OMG! what a beautiful bride she is..This is how your Rashmika was before most of you have known her and looks like nothing has changed! Ahhh.. and these girls." 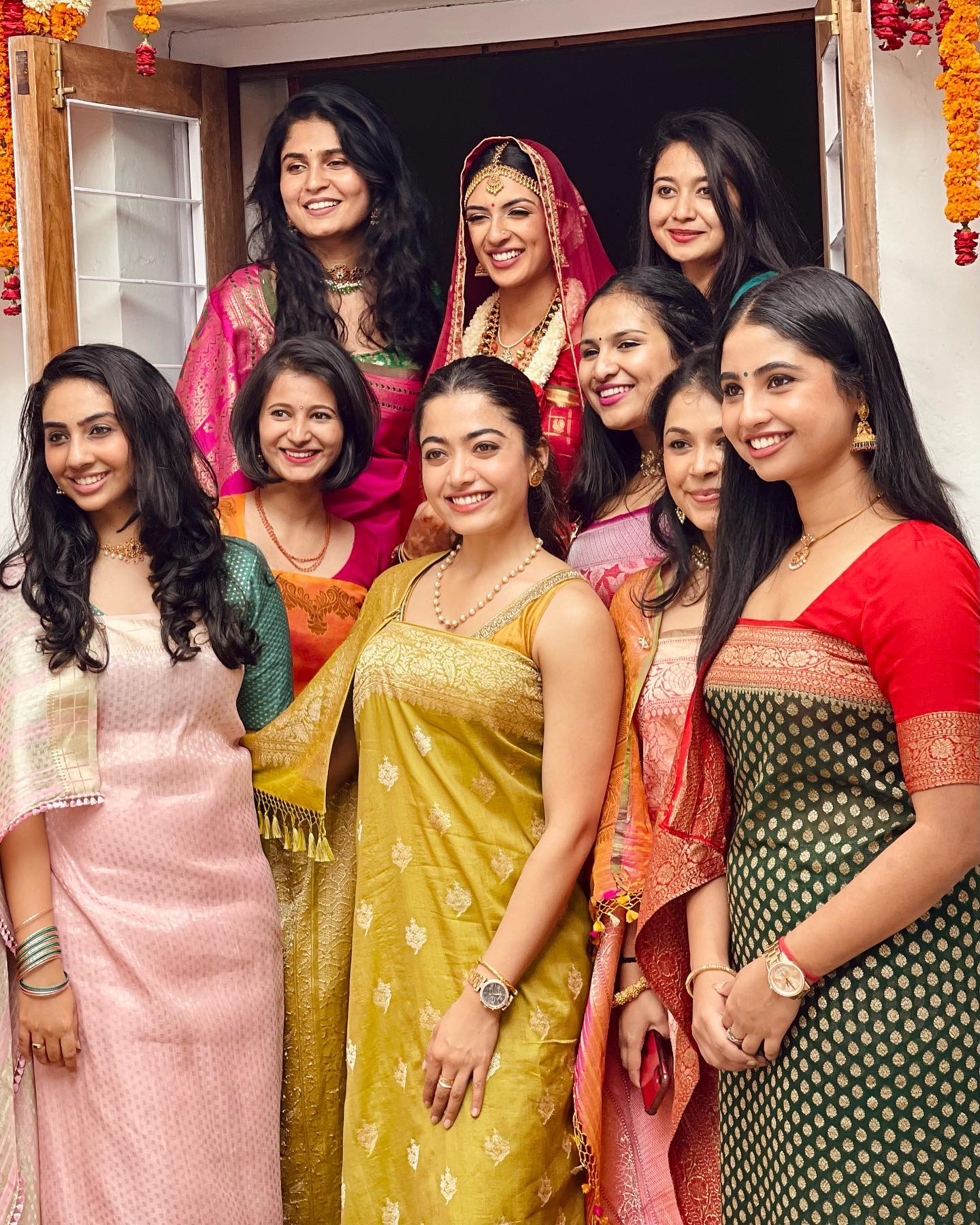 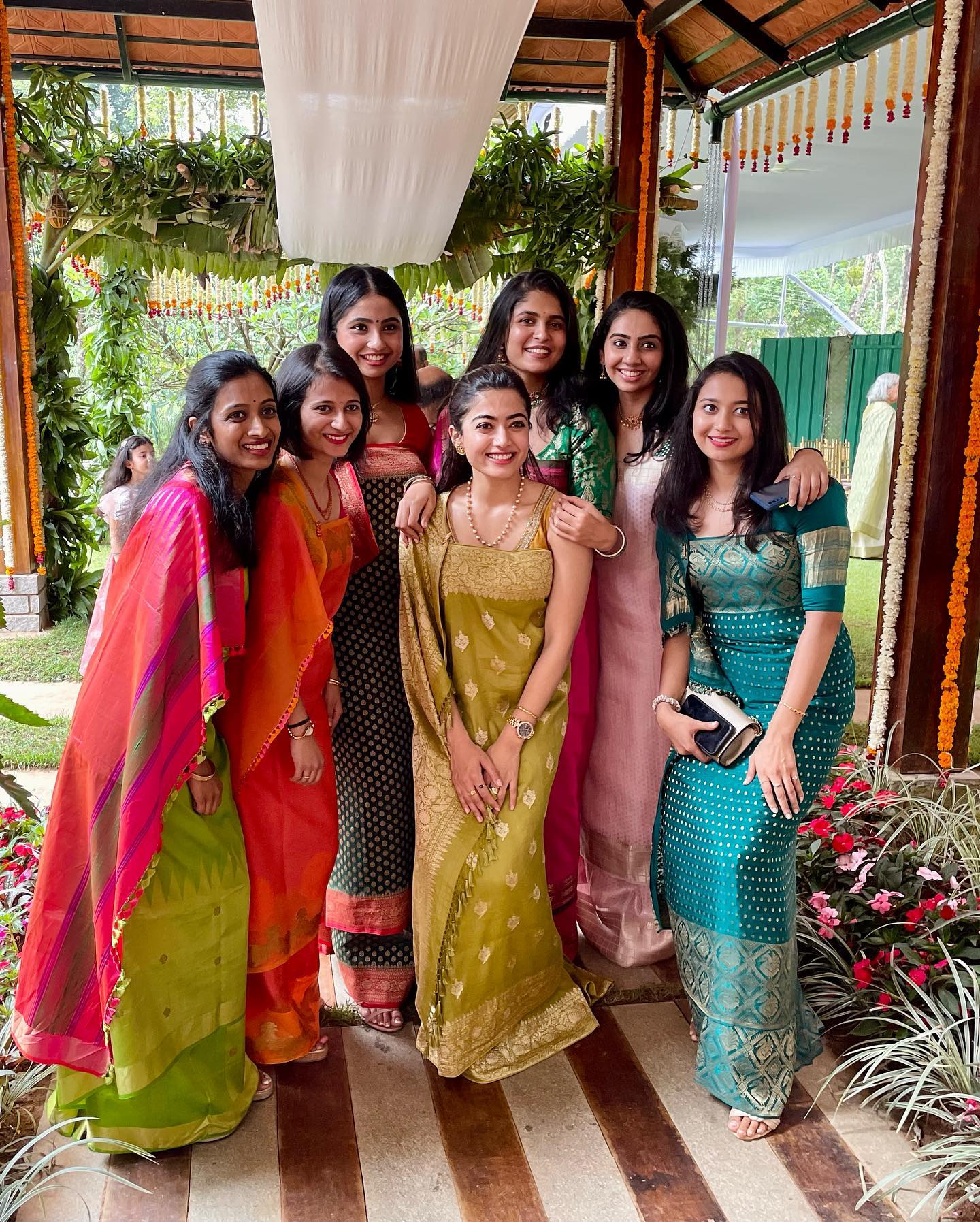 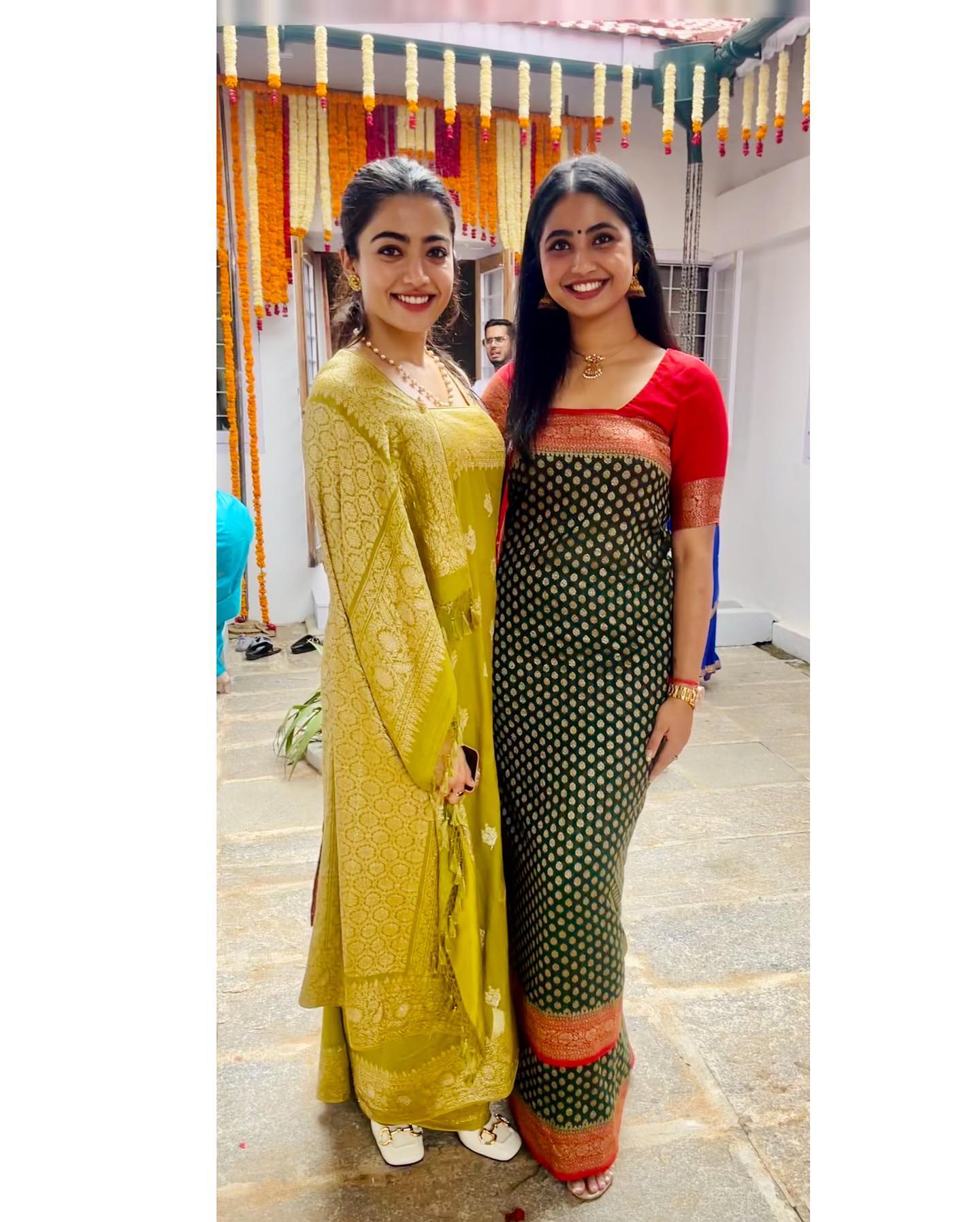 In an interview with India Today, Rashmika Mandanna had opened up about her relationship status and had revealed her marriage plans amidst her dating rumours with her close friend and actor, Vijay Deverakonda. The actress had hinted that she is single at the moment and had also added that she had not given a thought about getting married as of yet. According to the actress, she is too young for the institution of marriage. Reflecting on the same and while sharing her views about getting married, Rashmika had explained:

"For me, love is when you give each other respect, time, and when you feel secure. It is difficult to describe love because it is all about feelings. Love works only when it's both ways, not just one. I don't know what to think about it (marriage), because I am too young for it right now. I haven't given it a thought. But having said that, you should be someone who makes you comfortable." 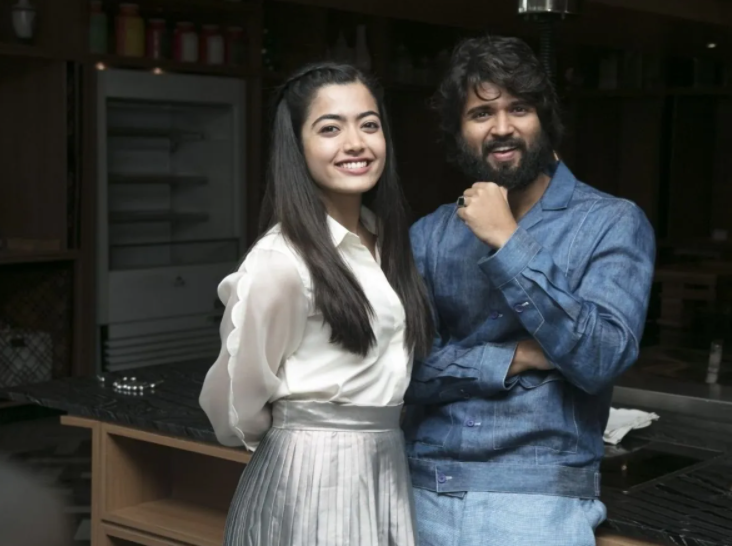 Although time and again in many of her interviews, Rashmika Mandanna had rubbished her dating rumours with Vijay Deverakonda, but their frequent dinner dates and public appearances reflect a completely different story. For instance, on December 19, 2021, Rashmika and Vijay were spotted leaving a restaurant in Mumbai after having a dinner date. Their dinner date had made their massive fanbase excited once again, as pictures and videos from the same had gone viral all over the internet. While Rashmika had looked stunning in an all-black avatar, Vijay had proved the mettle of his fashion game with his tiger-print shirt and black pants. On the professional front, Rashmika Mandanna will be next seen in the film, Mission Majnu, making her Bollywood debut opposite Siddharth Malhotra.

Next Read: Viral Bhayani On Sleepless Nights During Weddings And Catching Married Actors Cheating Their Spouses