Following the trend where partners are turning hairstylists for their better-halves in the lockdown, Rajkummar Rao gives a flawless haircut to his ladylove, Patralekhaa. And we are impressed!

No matter if you are a CEO or an employee, a science graduate or from the field of arts, living in a 1BHK apartment or a kotthi, one thing that’s common for everyone in the lockdown is doing the household chores. And as you can’t go out due to the ongoing COVID-19 pandemic, personal grooming also takes a toll. After Anushka Sharma-Virat Kohli, Sonam Kapoor Ahuja-Anand Ahuja, Tisca Chopra-Sanjay Chopra, Rajkummar Rao and Patralekhaa are giving #QuarantineGoals with their lockdown video as the former turned hairstylist for his ladylove. (Also Read: Anushka Sharma Turns Hairstylist For Hubby, Virat Kohli And Cuts His Hair With 'Kitchen Scissors')

CityLights co-stars, Patralekhaa and Rajkummar Rao have redefined the word 'relationship goals' for us and quarantine changes nothing for them. During the COVID-19 quarantine, Patralekhaa and Raj had shown off their culinary skills. In Raj’s first Insta story, he and filmmaker, Viveck Daaschaudhary can be seen chopping off vegetables as he had written, “The first step of cooking. Chopping vegetables. And if it is onions, you can wear glasses too” atop it. The next story was of the final dish prepared by Raj and his co-chef, Patralekhaa. He had written, “The food is ready! Chana masala, moong ki dal and quinoa. Co-chef: Patralekhaa” atop it. 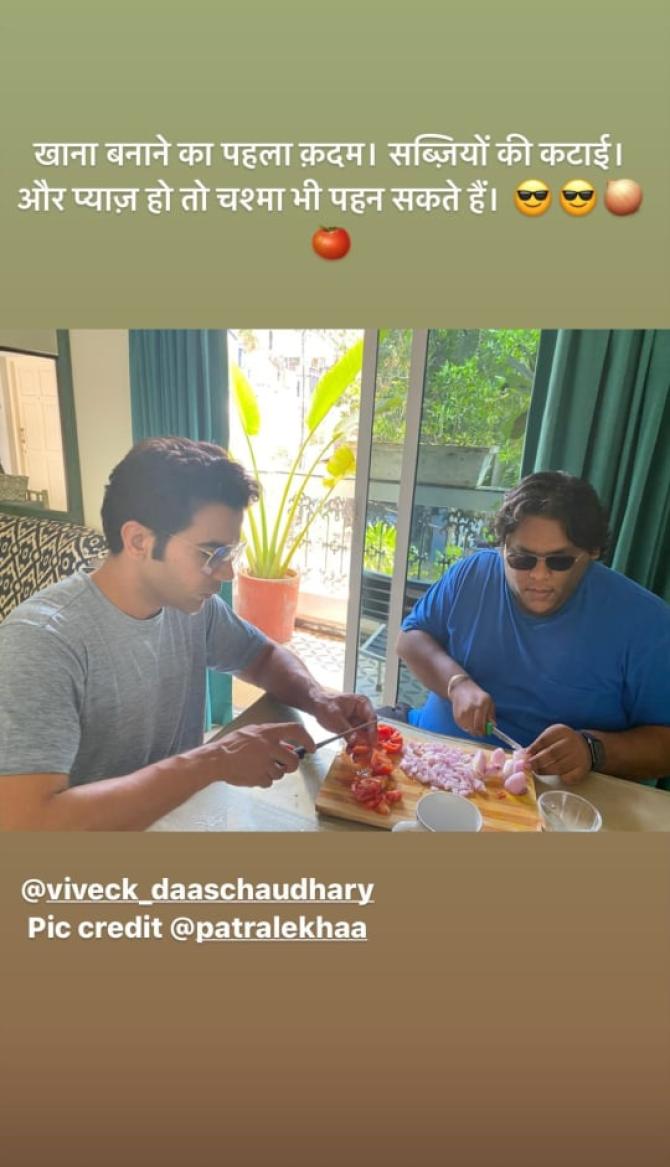 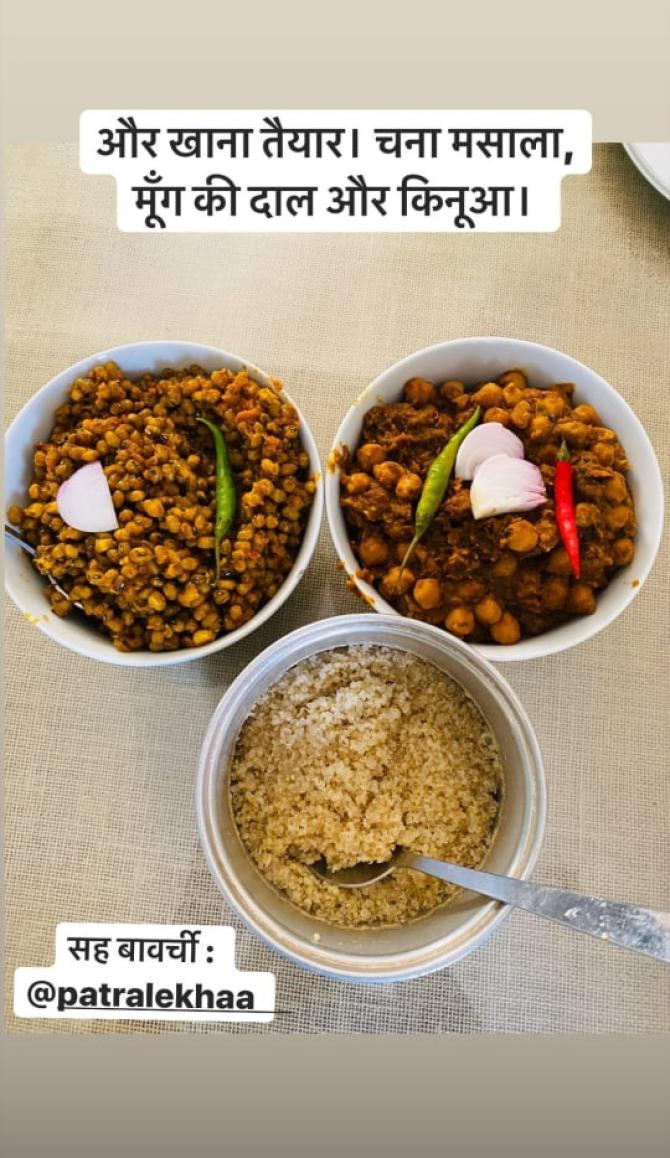 Following the trend where partners turn hairstylists for their better-halves, Rajkummar Rao gives a flawless haircut to his ladylove, Patralekhaa. Patralekhaa posted a time-lapse video, wherein Raj cuts her hair with a trimmer as she directs him how to do it. Patralekhaa captioned the video as “Jahan chah, wahan raah @rajkummar_rao” followed by a heart, star and haircut emoji.

In a lockdown interview with Rajeev Masand, when Rajkummar Rao was asked how is he holding up the 21-day quarantine and how the days been like for him, he had retorted, “I am holding up well, honestly, no complaints. I am doing all the productive work as much as I can. But no complaints from my side, I am doing whatever I can. I am working out like crazy. I am practising my guitar, which I have always wanted to and taking a couple of lessons from YouTube. I am reading, I am watching some great stuff on OTT platforms.” Revealing how and why he and Patralekhaa had decided to spend the quarantine together, Raj had continued, “Yes, she lives very close by, her house is very close to my house in Andheri. So luckily at 8pm, when Modi ji announced the lockdown, so we decided, just as I said we were so busy for the past 3 years doing different things, thought that these 21 days or maybe more, we should spend this time together. And cover up for all that we have lost.” (Also Read: Sonam Kapoor Turns Hairstylist For Husband, Anand Ahuja, Showers Him With Kisses)

When Rajeev Masand had asked Rajkummar Rao and Patralekhaa, who had joined the interview in the second half, how are they managing the household chores, the latter had replied, “I must say that we are few of the lucky ones because we had our help with us. So, that area we are sorted. But we both have found cooking, especially me but he helps too.” To which, Raj had interrupted, “I think she’s finding her inner chef and she’s making such lip-smacking meals, I’m not kidding Rajeev sir. So I told her where were you all these years. Wow!” When asked if Raj helps or not, Patralekhaa had replied, “No, completely. He’s cooks himself like he’s making dishes for us so, it’s quite nice.” Raj added, “I just realised I make the world’s best sabudana khichdi, I know it sounds boring but…” Raj and Patralekhaa had also revealed their plans of having a get-together after everything gets normal and have a potluck as everybody is exploring their inner chefs. 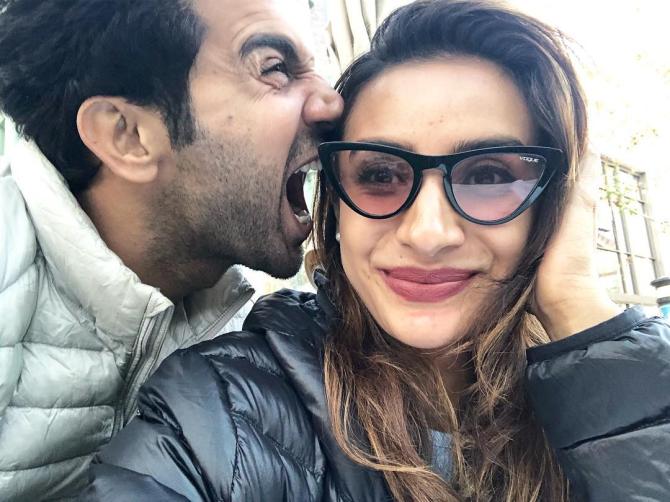 Just how we are loving to dig out old pictures and admiring the time, when we were free to go out, travel, explore, meet new people, hangout with friends, party with family and whatnot. Now that we have to stay at home to stay safe, all we can do is to drool over those throwback times. Patralekhaa, who is a self-confessed water baby, had posted a picture of herself from one of her vacations. Dressed in a white bikini, Patralekhaa had posted a picture from the beach and had captioned it, “#Throwbackthursday I miss the sea. Always been a water baby a true #pisceangirl pic credit @rajkummar_rao.” To which, Rajkummar Rao had commented, “And I was wondering, how come it’s feeling so HOT today. Now I know” followed by fire and heart emojis.

Rajkummar Rao had featured on the 15th episode of Koffee With Karan season 6 and had unravelled many stories about his personal life and relationship with Patralekhaa. The host of the show, Karan Johar started off his conversation with Raj on the show saying, “You’ve been in a relationship for eight or nine years and you’re one of the few actors who’s come out in the open with girlfriend, Patralekhaa, who is also an actor. There are lots of images of both of you together like sweetheart couple, great, all happy, why aren’t you getting married? And it’s been nine years!” To which, Raj had replied, “I still feel like a kid, honestly. Mentally I’m not ready to get married. We’re in a very happy relationship and we’re very happy about it. And our parents are not complaining. So, I think there’s no pressure to get married. And we both honestly are focusing on our respective careers. Not like we don’t believe in the institution but right now, we don’t feel is the right time.” (Also Read: Tisca Chopra Follows Anushka-Virat's Path, Chops Down Husband, Sanjay Chopra's Hair) 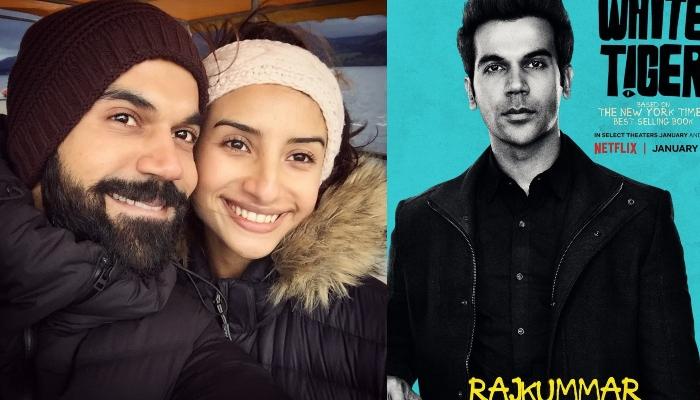 There’s a reason why Mumbai is called the city of dreams! It is not just a city but an emotion that resonates with every Mumbaikar and the people, who moved to Mumbai with a dream to pursue their passion and achieve success. While some are living it, some are pursuing