Bollywood actress, Shilpa Shetty Kundra and her husband-businessman, Raj Kundra are one of the most loved and entertaining couples in the entertainment industry, who always mesmerise their massive fanbase with their videos, pictures, and heartfelt notes for each other. On November 22, 2009, Raj and Shilpa had become each other's forever and had embarked on their journey of 'happily ever after'. Shilpa and Raj have blissfully shaped their 'happily married life' and were blessed with a baby boy, Viaan in 2012 and on February 15, 2020, baby girl, Samisha had completed their family forever. (Recommended Read: Pregnant Neeti Mohan Flaunts Her 5 Months Baby Bump As She Twirls And Poses In A Green Flowy Dress)

Since then, Shilpa Shetty Kundra is giving us major mommy goals and all the innovative ideas in the world on how to keep a healthy bond with your kids. The actress shares a warm bond with her son, Viaan and creating a similar bond, not more, not less, with her little baby girl, Samisha Shetty Kundra also. As since her birth, the actress is leaving no stone unturned to make her baby girl's every single day a special one. On March 8, 2021, Bollywood actress, Shilpa Shetty Kundra's husband, Raj Kundra took to his Instagram handle and shared a powerful note with a hilarious video to wish his wife on International Women's Day. In the video, the actress can be seen recreating the iconic song, Tera Naam Liya from the film, Ram Lakhan, and just like Dimple Kapadia in the song's original video, Shilpa also acted in front of Raj Kundra's portrait and acted shocked when his picture comes to life. The song's funny recreation has left their fans in splits, and most of its credit goes to Raj for his humorous expressions in the video. However, his powerful note in the caption proves that he's a doting husband, as the first line of his note proves that he's a gentleman. His note can be read as "This Woman's day a small request... Let's, please celebrate respect and equality everyday!! My day starts and ends with taking my girlfriend @theshilpashetty name. She is strong, successful, independent and above all, an amazing role model! It’s not just about today it’s about everyday #equality #love #respect #rajmantra #rajfuntra #gratitude #womansday.” Take a look:

The doting husband, Raj Kundra never leaves any stone unturned to make his wife, Shilpa Shetty Kundra feel important and always adores and respects her for all her efforts, sacrifices, and above all, inspiring him to be a better person. It was seen in Raj's beautiful wish for Shilpa back in 2019 on International Women's Day, when he had congratulated his wife for owing some stakes of a top Bandra fine-dining on the special occasion. Raj had penned a note along with two pictures, and it could be read as "Firstly #happywomansday to all you lovely ladies out there! Secondly, a big congratulations to the superwoman in my life @these ilpashetty who manages to do it all so well. Super Mum, Super Host, Super wife, Superfriend, Super Daughter the list is endless!! More power to you and more restaurants :) what's a Shetty without a restaurant and that too the best one in town Love you loads my jaan." (Don't Miss: 15 Times When Mothers Twinned With Their Little Girls In Matching Outfits And Made Jaws Drop) 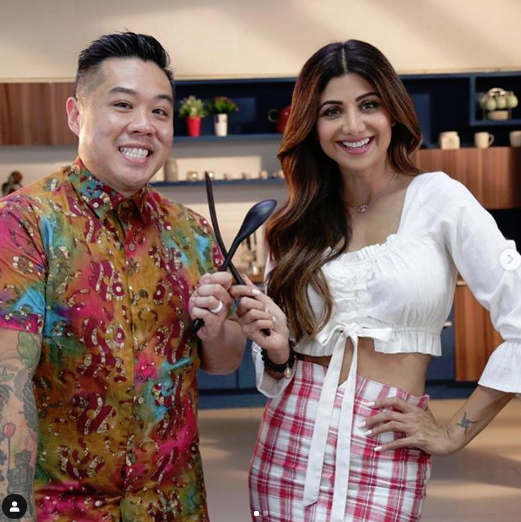 However, there's no denying the fact that Shilpa Shetty Kundra also never skips a chance to shower compliments on her doting husband and it's his role as a father, for which Shilpa respects him a lot and a glimpse of the same everyone had witnessed on June 21, 2020, i.e., Father's Day and International Yoga Day. Along with a cutesy video, Shilpa Shetty had penned an emotional caption, and it could be read as "Today is extra special... it's International Yoga Day and Father's Day too! I truly believe, the family that eats, prays, and practices yoga together... stays together. So, we had Daddy and son Viaan-Raj spending a little extra time together... sharing a little snippet from our 'Yoga with Family' session. Here's to the unsung hero of the house, who is often the home-jester and the rock of Gibraltar for all of us... who quietly makes everything right, cheers us on, and is the wind beneath our wings. Fathers truly are our first heroes, just like you are @rajkundra9. Thank you for always being such a hands-on father to Viaan and now Samisha. I feel extremely proud that they have the perfect role model to look up to. Happy Father's Day, my love." (Also Read: 8 Bollywood Ex-Wives Who Stayed Single After Their Husbands Cheated On Them And Remarried)

Did you like Raj's wish for Shilpa on International Women's Day? Let us know!