Rahul Vaidya's Sweetest Birthday Wish For His Wife, Disha Parmar Is What Every Girl Wishes For

Television actress, Disha Parmar turned 29 today and is celebrating her birthday with her hubby, Rahul Vaidya, amidst the beautiful hills of Srinagar.

Television actress, Disha Parmar is celebrating her 29th birthday today. The gorgeous actress, who has appeared in several TV shows, is best remembered for playing the role of 'Pankhuri' in the TV show, Pyaar Ka Dard Hai Meetha Meetha Pyara Pyara. Apart from that, she had worked in various TV shows including Woh Apna Sa, and was also featured in several commercials.

Disha is married to singer, Rahul Vaidya, who had proposed to her on national television on her birthday in 2020, during their stint on the show, Bigg Boss 14. The cute proposal had gone viral on social media and their fans couldn't stop gushing over it. However, the two are happily married and enjoying every moment of togetherness. Currently, the adorable couple is in Srinagar for the celebration of Disha's special day.

Disha Parmar Jetted Off To Srinagar For A Romantic Birthday Celebration With Her Hubby, Rahul Vaidya

Rahul Vaidya Wants A Baby With Disha Parmar, Gets A Hilarious Reply From Her, Shares Baby Plans 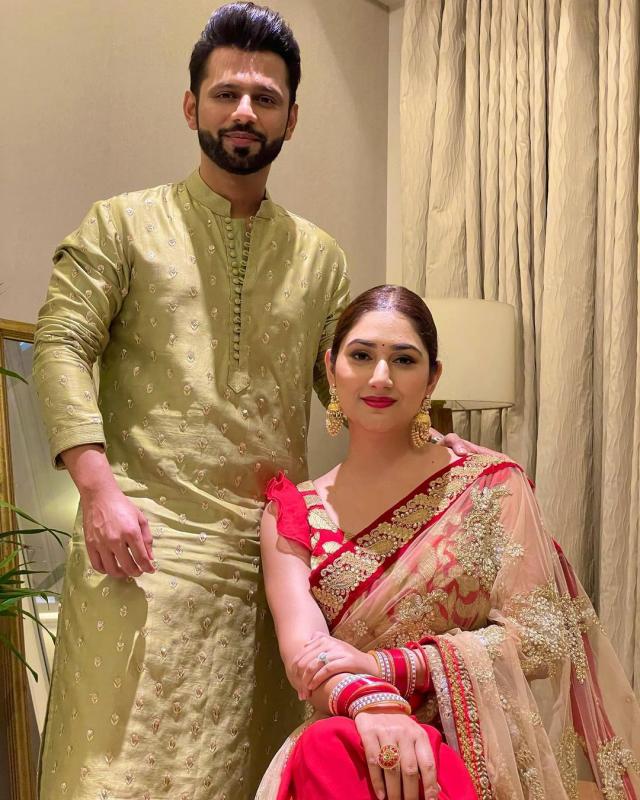 A few hours back, Rahul Vaidya took to his Instagram handle and shared a sweet birthday wish for his wife, Disha Parmar. Sharing a series of beautiful pictures featuring him and Disha along with the snow-capped mountains in the background, Rahul wrote:

"There’s only one girl who I could have married and that’s you! From proposing you last year same date to celebrating this day today with you as ur Husband has been just so beautiful.. Be blessed always as you are .. Happy Birthday @dishaparmar."

In the pictures, Rahul and Disha were spotted posing romantically with each other in an exquisite location. While Disha donned a black coat and a pair of blue jeans, Rahul looked dapper in a red jacket and blue denim. Moreover, Disha completed her look with open tresses and carried a yellow handbag. They both had their sunglasses on.

On November 11, 2021, Rahul Vaidya took to his IG handle and shared a set of IG stories featuring the birthday girl, Disha Parmar. In the post, we can see Disha sitting next to her birthday cake as she smiled for the camera. Atop it, Rahul wrote a special note which can be read as:

The doting husband, Rahul Vaidya also shared a cutesy video of his wife, Disha Parmar cutting her birthday cake, on his IG story. In the video, Disha was seen dressed in a black top paired with a red pyjama as she was cutting her cake, while Rahul sang the birthday song for her. After cutting the cake, Disha thanked Rahul and offered him a piece of the cake. Their video is doing rounds on the internet and their fans are showering heaps of love and blessings on the adorable couple.

On November 9, 2021, the paps had spotted Rahul and Disha at the Mumbai airport in cosy and comfortable casuals. While Rahul had opted for a green hoodie, paired with blue denim pants and white sneakers, Disha, on the other hand, had donned an olive green hoodie, teamed with blue denim pants and white sneakers. The actress had completed her look with a yellow handbag, a ponytail and minimal makeup. On November 9, 2021, Disha Parmar had taken to her IG handle and had dropped some ethereal pictures from their romantic getaway into the hills of Srinagar. Sharing the pictures on her IG Story, Disha had written, “Lego!!!” In another picture, she had shared a glimpse of the 'best view' as she had enjoyed her breakfast with her husband, Rahul Vaidya. In the picture, Rahul could be seen wearing a green hoodie, having a delicious meal.

Don't miss: Kangana Ranaut Opens Up About Her Wedding Plans, Reveals She Has Someone Special In Her Life

Disha Parmar Jetted Off To Srinagar For A Romantic Birthday Celebration With Her Hubby, Rahul Vaidya

Rahul Vaidya Wants A Baby With Disha Parmar, Gets A Hilarious Reply From Her, Shares Baby Plans