'Bigg Boss 8' fame, Rahul Mahajan shared an unseen family picture from his childhood days and his late father, Pramod Mahajan looks like his carbon-copy. See inside!

The popular television reality show, Bigg Boss 8 fame, Rahul Mahajan has always managed to stay in the headlines, thanks to his personal life. On November 20, 2018, the son of late Union Minister, Pramod Mahajan had gotten married for the third time to Kazakhstan model, Natalya Ilina. Their wedding was a low-key affair in Mumbai, with only a few close friends and family in attendance. The adorable couple had looked stunning in their respective outfits and had given us some major couple goals with their breathtakingly beautiful wedding pictures. (Recommended Read: Suhana Khan Flaunts Her Makeup In A White Cardigan, Her Three Ear-Piercings Caught Our Attention)

For those who don't know, Natalya Ilina Mahajan is Rahul Mahajan's third wife, and he was earlier married to Shweta Singh and Dimpy Ganguly. In an interview with Bombay Times, he had talked about his previous marriages and had said that both of them had happened in a hurry. However, Rahul had clearly stated that both his ex-wives were quite different from him, and they weren't compatible. The popular celebrity had also stated that he didn't want to be in a marriage just for the sake of it and had concluded his statement by saying that he had found true love in his wife, Natalya.

Rahul Mahajan Gets Married For The Third Time, Says There's No Room For Arguments In This One On March 10, 2021, Bigg Boss 8 fame, Rahul Mahajan took to his Instagram handle and shared an unseen family picture from his childhood days, as he misses his late parents, Pramod Mahajan and Rekha Mahajan. In the beautiful family picture, we can see Pramod ji sitting with his wife, Rekha ji at Taj Mahal and posing for the camera with their kids, Rahul and Poonam. While, on one side, Rahul looked handsome in his t-shirt, on the other side, his sister looked way too pretty in her all-pink look. It's impossible not to compliment Rahul's mother, Rekha ji's simplicity and elegance in the picture, as she looked gorgeous in the priceless photo. Undoubtedly, the whole frame's highlight is Pramod ji's look, as he looked dapper in his black shades, brown shirt, and black pant. The never-seen-before picture is way too special for Rahul and indeed a special one for the devotees of Pramod ji as the uncanny resemblance of the father-son duo is unmissable. Take a look: 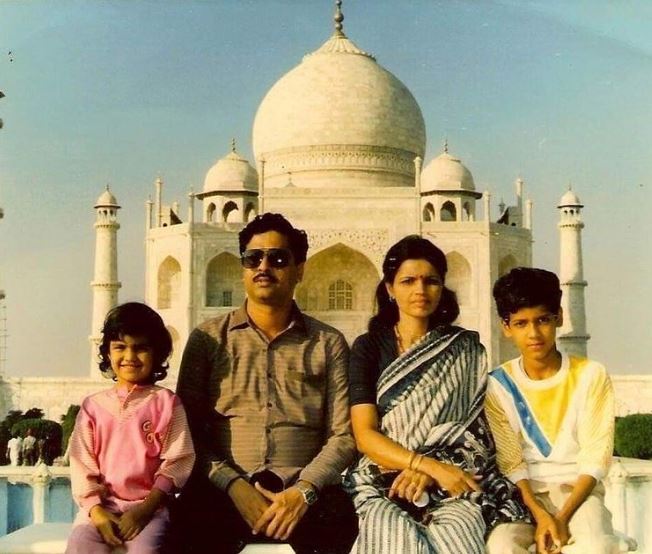 Along with the picture, Rahul Mahajan penned down an important note emphasising on the importance of our parents' presence in our life and requested everyone to tell their parents how much they love them whenever possible, as life is all about uncertainties. His note can be read as "We were small didn't have an idea of mobile phone or internet but we were satisfied and loved by our family and most importantly we all were there in one frame without any distraction or thought just enjoy getting clicked without expectation #miss #baba Love your parents and tell him that every day of every hour every time possible just do it." Time and again, Rahul shares pictures and videos of his father on his IG handle, and same had happened on March 5, 2021, when he had shared the much-viral AI-generated animated portrait of his late father and had captioned it with a sweet note. His note could be read as "Even technology can make you relive the sweetest memories & emotions… What a man, What a life! #pramodmahajan #baba." (Don't Miss: Disha Parmar Posing With Her 'Cutie', Rahul Vaidya At A Wedding Is All About 'Pyaar, Ishq, Mohabbat')

Talking about Rahul Mahajan's marital life with his wife, Natalya Ilina Mahajan, then in an interview with ETimes, he had revealed that his wife had converted to Hinduism. Rahul had said, "We are like two tracks of railway. We do not interfere in each other's matters too much and give each other space. We are not even too apart from each other. But we maintain the balance so that our marriage is on the right track. She is Russian and has converted to Hindu religion and I always give her the reference of Lord Shiva and Parvati. I always tell her that husband and wife's relationship should be like Shiv and Parvati. We keep them as our idols in our relationship. I teach her Geeta and we read a lot of mythological stuff together. I feel you really need a good destiny to find a perfect partner and family." (Also Read: Charu Asopa Wishes Her Mother, Neelam Asopa 'Happy Birthday', Shares Unseen 'Sangeet' Photo With Her) Do you find sheer resemblance in Rahul and late Pramod ji? Let us know!

Rahul Mahajan Gets Married For The Third Time, Says There's No Room For Arguments In This One