Priyanka Chopra Takes Her Fashion Game A Notch Higher In A Velvet Sweatshirt Worth Rs. 1 Lakh

Priyanka Chopra was spotted on the streets of Los Angeles, and her comfy wear grabbed our attention. She wore a casual velvet sweatshirt, and the price was breathtaking.

Priyanka Chopra Jonas has time and again, proved that she is a global icon. She can pull off any role, be it a period film's character like 'Kashibai' in Bajirao Mastani, or of a modern woman in Quantico. Apart from all of that, Priyanka Chopra, a.k.a. Piggie Chops, slay in every style she puts on. She has managed to steal millions of hearts with her acting prowess and chic fashion sense.

The Desi Girl of Bollywood has often awestruck us by the way she carries herself, acing every look. She can slay in anything and everything! Moreover, sometimes, the cost of her outfits burns a hole in our pockets. And it would be an understatement to say that Priyanka's globe trotter aesthetic and her love for the desi style serve as an inspiration to all. Needless to say, Priyanka Chopra is a fashionista, who surely knows how to impress the critics with her outstanding sartorial choices. 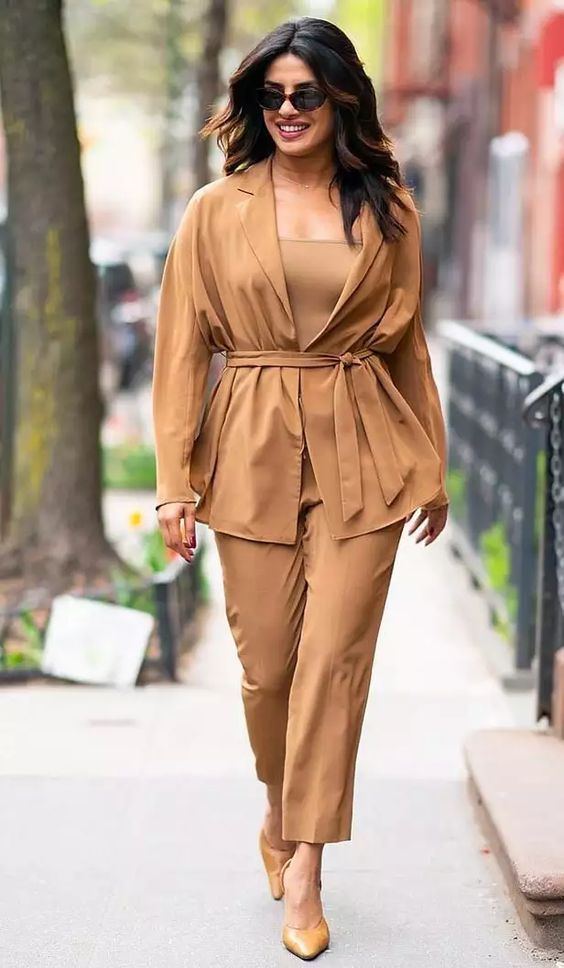 Priyanka Chopra Jonas is known for her style statements. The diva, who has always managed to ace all her looks, has her fashion game on point. From her red carpet looks to her casual outings, her epic wardrobe always brings out stunning ensembles, which sent out major fashion goals and inspire many. On January 4, 2022, Priyanka was spotted on the streets of Los Angeles in comfy chic wear, looking classy. She looked super stylish in a velvet sweatshirt, paired with a neat bun, and a black mask. The diva opted for a comfortable Gucci Stripe Velvet sweatshirt and took the casual day look to a top-notch. Upon doing a little research, we found that Priyanka Chopra's Velvety chic sweatshirt is priced at a whopping amount of 1026 pounds, which after converting to Indian currency is approximately Rs. 1,02,835. 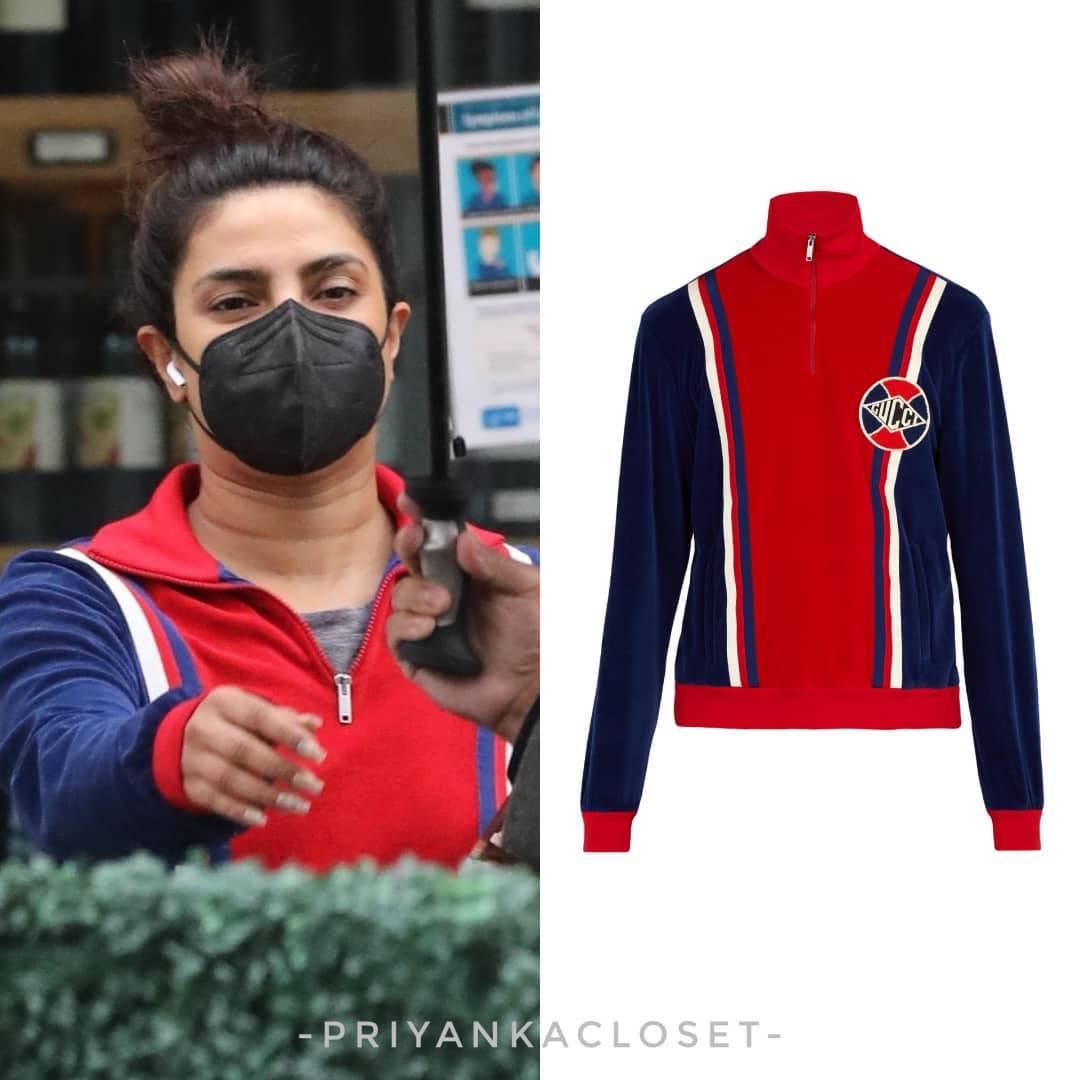 On November 23, 2021, Netflix had dropped a show, the Jonas Brothers Family Roast, which was dedicated to the Jonas Brothers, Nick Jonas, Joe Jonas, and Kevin Jonas. Several comedians and the singers' wives had graced the show and had roasted them, leaving the audience to go ROFL. Priyanka Chopra Jonas had shared a video on her IG handle to give a glimpse of her performance on the show where she had enjoyed roasting her husband. She had captioned the video as:

One thing that had caught our attention was the gorgeous dress that the actress was wearing. Pee Cee was seen wearing a shimmery deep gold and black body-hugging dress with a slit. She had completed her look with wavy curls and metallic heels. Priyanka Chopra's outfit is from the French haute couture label, Alexandre Vauthier. On the designer's website, the dress is priced at a whopping amount of USD 3,329, which after converting to Indian currency is approximately Rs. 2,47,495. Check out the cost of the dress below. While the stunning one-piece dress itself was amazing, Pee Cee had rocked it like anything. 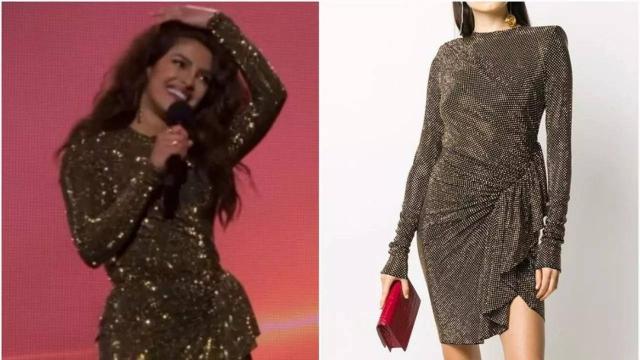 On January 10, 2020, Priyanka Chopra Jonas was spotted walking hand-in-hand with her hubby, Nick Jonas, and her beautiful Versace dress had become the talk of the town. She had paired her Barocco Rodeo's printed dress with a black blazer, black heels, and a bold red lipstick. According to a report of India Today, the cost of Priyanka’s Versace dress with a plunging neckline and thigh-high slit was Rs. 1,03,581. 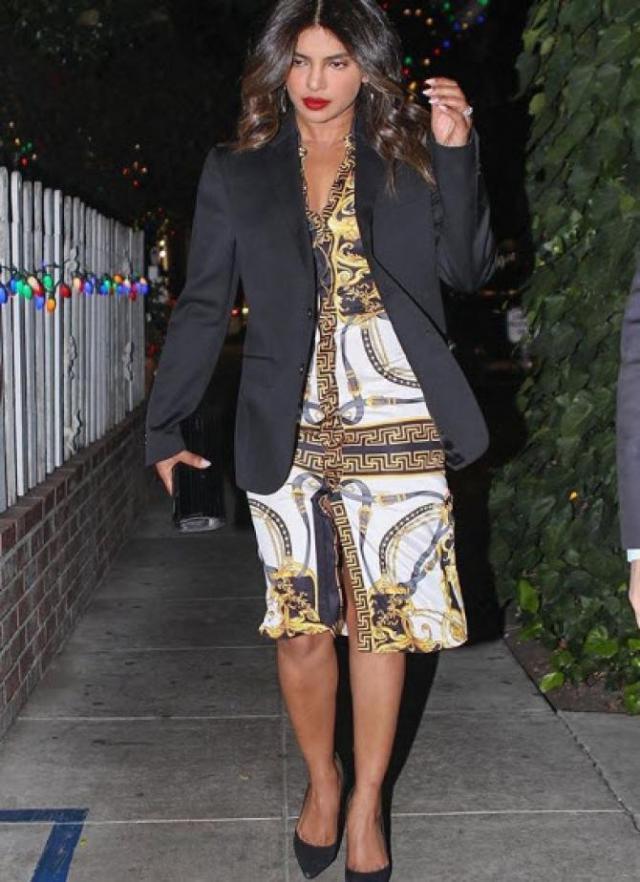 Global icon, Priyanka Chopra Jonas needs no introduction. The gorgeous diva has already made a name for herself with her extraordinary on-screen performances and sartorial fashion sense. Now, she is a loving wife to her husband, Nick Jonas and a hands-on mommy to their baby girl, Malti Marie Chopra Jonas.