Priyanka Chopra Jonas shared a picture of her mother, Madhu Chopra with her 'dhewati', leaving us in awe! Check out the picture inside!

For every nani, dadi, dada, nanu, their grandchild means their world. They wait for their arrival and their excitement level is even more than the parents-to-be. Narrating stories, feeding them food, showering their love and fulfilling their grandchildren’s every wish is just one per cent of what every grandparent does! It is a feeling beyond expression and Priyanka Chopra Jonas’ mother, Madhu Chopra can totally relate to it as she meets her dhewati. Scroll down to know more! (Also Read: Disha Parmar Replies To Rahul Vaidya's Marriage Proposal, Pens A Cryptic Tweet [Details Inside])

After meeting at the Vanity Fair Oscars after-party in 2017, the rumours of Priyanka Chopra dating Nick Jonas had left the tongues wagging. It was in August 2019, when Priyanka had announced the news of her roka with Nick Jonas on her social media handle. It was on December 1-2, 2018, that Priyanka Chopra had added Jonas to her name by tying the knot with Nick at Umaid Bhawan Palace as per both Christian and Hindu rituals. And since then, the two are often rumoured to be pregnant. While the rumours were never true, but now, Priyanka has shared a nani-dhewati moment of her mother and her child and we are in awe!

Hold your horse before you assume that Priyanka Chopra Jonas also had a lockdown baby because the case is a bit different here! Yes, Madhu Chopra is a nani, but her dhewati is none other than, Priyanka Chopra Jonas’ little pooch, Diana, whom she had brought into her life in 2016. Diana and Priyanka have been inseparable and she has now moved with her mommy, PeeCee to her daddy, Nick Jonas’ home. After a long time, Priyanka’s baby girl, Diana met with her nani, Madhu Chopra and the mommy has shared a happy moment between Madhu ji and Diana. Taking to her IG stories, Priyanka shared a picture of Madhu ji fondly looking at Diana, who can be seen sitting next to her. Take a look:

In 2019, Priyanka Chopra Jonas’ outing at the NYFW for Michael Kors fashion show had started the rumours of her pregnancy as one could spot a tiny bump in her pictures. Talking to People magazine, Priyanka had talked about having kids, brushing off her pregnancy rumours saying that it’ll happen when it will happen. She had stated, “We both know that that’s something that needs to happen, but it’s not something I think about very much. We’re both very driven, we love our work, we’re married to our work, and we’re both very supportive of each other’s work. So I’m sure it will happen in an organic way. We definitely want kids, and when the time is right, it will happen.” (Recommended Read: Comedian, Rajeev Nigam Opens Up About His Son's Death, Reveals Only Maniesh Paul Had Offered Help)

In an interview with Spotify’s The Rewind, Nick Jonas too had talked about his baby plans and had shared, “I definitely want to be a father someday. I think that’s a real dream, and I think I have had to grow up real quick.” The international sensation had added, “With that, you could look at it two ways, you could say that was unfair, or you could say it has given me some real perspective at an early age. And I have seen a lot of life at an early age and I hope to be able to share that with a kid of my own someday.”

Priyanka and Nick celebrate every teeny-tiny moment of their lives. On July 20, 2020, Priyanka had remembered the day when Nick had popped the question to her and had brought the world at her feet by asking her to marry him! Recalling the same, Priyanka had posted a cute mirror selfie with her hubby and had written a heartfelt note, which could be read as "To the greatest joy of my life. 2 years ago on this day you asked me to marry you! I may have been speechless then but I say yes every moment of every day in the most unprecedented time you made this weekend so incredibly memorable. Thank you for thinking of me all the time. I am the luckiest girl in the world! I love you @nickjonas." The doting husband, Nick had commented, "Thank you for saying yes. I love you, beautiful." (Don't Miss: Anita Hassanandani Flaunts Her Baby Bump In A Yellow Floral Dress, Poses With BFF, Surbhi Jyoti) 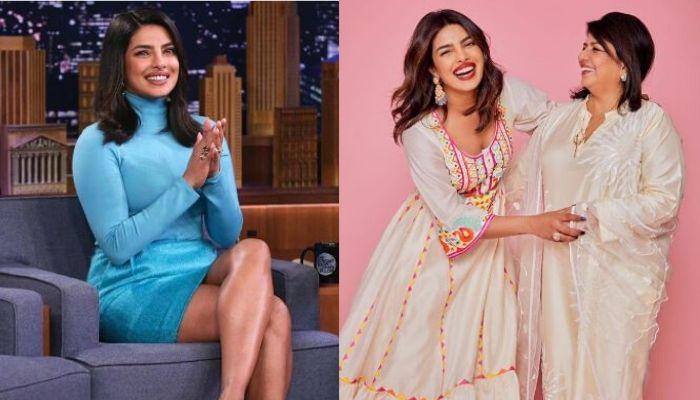