While we could see Cupid with a love-shaped arrow, prancing over Priyanka Chopra and Nick Jonas all the while, it was only on August 18, 2018 that Nickyanka decided to make it official. The couple apparently got engaged during Priyanka’s birthday and had hosted a beautiful puja-cum-roka ceremony at our Desi Girl’s Juhu bungalow. (Do Read: Nick Jonas's Ex-Girlfriend Olivia Culpo Opens Up About His And Priyanka Chopra's Engagement)

Truly, who knew that walking the MET Gala red carpet could help you find the man of your dreams! Priyanka and Nick’s story began from that and we hope it continues for many lifetimes. Also, we have a very interesting update for you. It was Nick Jonas’s 26th birthday yesterday (September 16, 2018) and in a one-of-a-kind gesture by Priyanka, she posted an adorable picture with Nick, where she is seen giving a peck on his cheek and captioning it as, “Happy birthday baby. @nickjonas” which is backed by a kiss and heart emoji. Also, Priyanka shared with us, a glimpse of Nick's birthday celebration from California. Sharing the same, she captioned the picture as, "Birthday Hang." Here’ the picture: 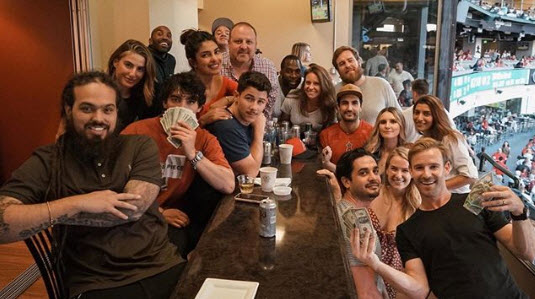 No, that’s not all! The couple has currently taken some time off from their hectic schedules and is having the best of their times with each other. Priyanka and Nick were watching the Anaheim Angels baseball tournament in Texas, wherein, Nick had cut his birthday cake on the stage post the game show. Before cutting the birthday cake, the couple sealed it with a cute kiss on each other’s lips. What was even more hilarious was Nick feeling Priyanka’s lipstick on his lips after the kiss and he cutely says, “I got some lipstick on” as the crowd cheered with a thunderous round of laughter! Checkout both the videos here:

Wasn’t this super-cute? And that’s not all! To-be saali, Parineeti Chopra too, took to Instagram and posted their first-ever family picture with Nick Jonas from their Goa vacation to wish her soon-to-be brother-in-law. She wrote, “Happppy bday Nick! @nickjonas  This year love and lady luck is sorted, so now I can only wish you all the happiness in the world! Throwback to the first family picture we all ever took @priyankachopra @tam2cul @siddharthchopra89.” Here’s the picture: (Also Read:Priyanka Chopra's Mother Madhu Chopra Reveals The Time When She Had 'Given Up' On Her Marriage) Nick’s mommy dear, Denise Jonas posted a few adorable pictures from Nick’s childhood and captioned the array of pictures as, “Happy Birthday Nicholas! I love you son. I wanted you to stay little forever but God had great purpose for your life. #birthday #nickis26 #motherslove” and daddy, Kevin Jonas wrote, “So proud of the man you have become @nickjonas #Happybirthday”, to go with a rockstar-kind of picture of Nick. Here you go, take a look at the pictures: 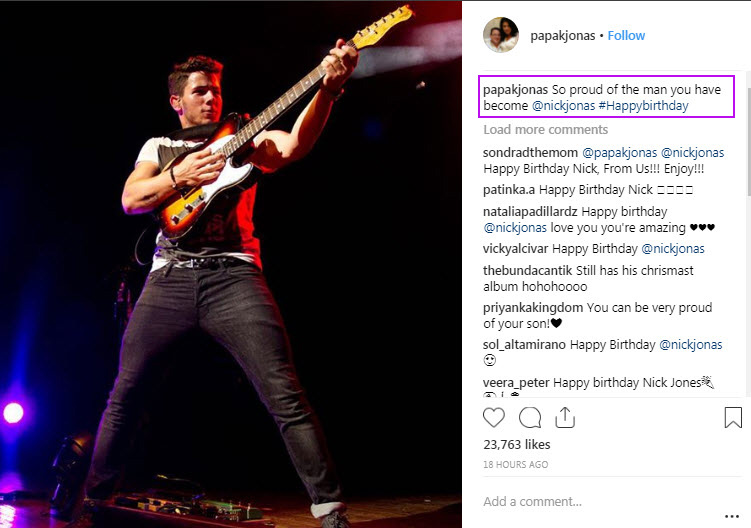 Looks like Nick is having a superb birthday! In case you missed, Priyanka has a super-funny couple nickname for both of them. A few days back, Nick was invited as a guest in America’s popular talk show, The Tonight Show Starring Jimmy Fallon. In the episode, you can see an all-elated Nick talking about his roka ceremony. While you will yourself get to see all the details, but first things first! The anchor of the show, Jimmy Fallon had pointed out to one of their roka pictures with the beautiful ‘NP’ logo in the backdrop and asked Priyanka, who was sitting in the audience, if she had a suitable couple nickname in mind. To which she had laughingly replied, “Prick”! Checkout the video here:

While Nick seems to be totally smitten with Indian culture and traditions, Priyanka’s mom, Madhu Chopra too, loved the Jonas family. Sharing the insides of the puja and about her to-be son-in-law and her family’s reaction to it, Madhu ji had shared, “Nick enjoyed the prayers during the puja”. And further added, “It was a new thing for him and he took it seriously. He followed what our panditji said, and chanted the Sanskrit mantras accurately. Both he and his parents did it beautifully. They are nice people.” Wow! While speculations are high that you will soon get to hear Priyanka and Nick’s wedding bells ringing, we hope that you can curb your excitemnt until then! Nevertheless, wishing Nick Jonas a belated happy birthday!