Bollywood actor, Prateik Babbar posts a special birthday wish for his 'legend', Raj Babbar's 68th birthday. Scroll down to check it out!

It's on occasions of great actors' birthdays, that we realise how historic and graceful journey, the Indian cinema entails. Veteran actor-turned-politician, Raj Babbar celebrated his 68th birthday today and with that, a spree of his iconic performances slid past our memories! Raj Babbar has given an exceptional contribution to the Indian cinema and has made his place on his own, despite having unconventional aspects of what was required to be a 'hero' in the industry. He has given some memorable performances and the world of performing arts would always be indebted to him! (Recommended Read: Sidharth Shukla Has An Interesting Revelation About His Marriage, Defines Love Like Never Before)

On the occasion of his birthday, Raj Babbar's social media is flooded with wishes and message from his fans all over the world, but one wish that caught our attention was from his son, the Bollywood actor, Prateik Babbar. For the uninitiated, Prateik Babbar had lost his mother, Smita Patil to complications during childbirth and was raised by his father and his grandparents. Scroll down to know Prateik Babbar's birthday wish for his father, Raj Babbar! 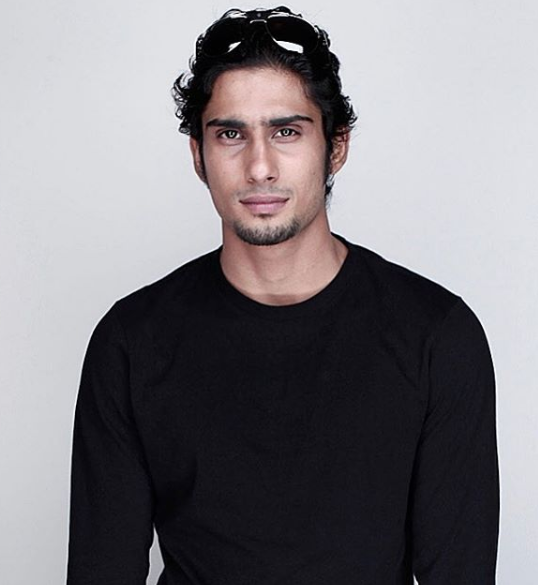 Veteran actor, Raj Babbar turned 68-year-old today and with him, the history of the iconic Indian cinema also grew a year older! On the occasion of his father's birthday, the doting son and Bollywood actor, Prateik Babbar wished him in a special way, giving a tribute to his iconic career. Prateik took to his Instagram stories and posted a happy birthday wish for his father, which can be read as "Happy Birthday to my legend @rajbabbarmp" followed by a red heart emoji. Prateik also posted a snapshot of his Raj Babbar's iconic song, 'Kisi Nazar ko tera intezaar aaj bhi hai', with a picture of a young Raj Babbar remembering his exceptional career in Bollywood. Check out the screengrabs of Prateik Babbar's birthday wishes for his father, Raj Babbar below: 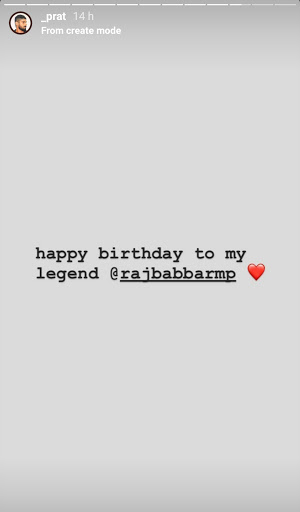 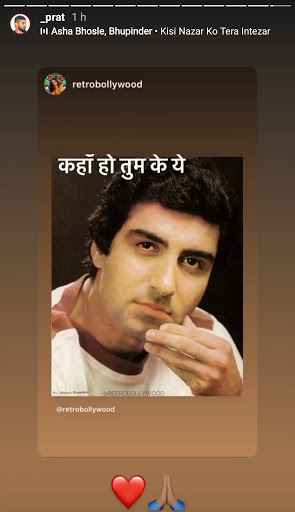 Recently, on the occasion of Father's Day, Prateik Babbar had shared an adorable picture of him bonding with his father, and had wished him Father's Day in a quirky caption reflecting how his das is still young. He had written in the caption, "I made a surprise visit to my young man for father’s day", followed by a red heart emoji. Prateik Babbar's sister, Juhi Babbar was quick to comment on the adorable post. She had written, "Pappis & Jhappis to my handsome boys" followed by two red heart emojis. Take a look at the picture and the screengrab of the comment below. (Also Read: Kangana Ranaut Teaches 'Grumpy' Nephew Prithvi Raj Chandel How To Play Piano, Rangoli Shares A Video) 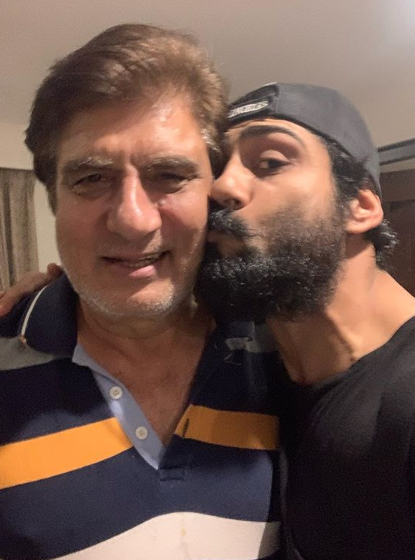 On May 13, 2020, Prateik Babbar had taken a walk down the memory lane and had shared a beautiful monochrome picture of his father, Raj Babbar with his mother, late Smita Patil from one of their movies. In the picture, the young and charming actor could be seen wearing a white kurta, while Smita ji was looking beautiful in her black kurti. The still had brought back all the golden memories of these two gems of the Indian Cinema. Along with the mesmerising photo, Prateik had written a caption that could be read as "#wbw #wayback #Wednesday meet the parents #flashback #greatness.” (You May Also Like: Milind Soman And Ankita Konwar's Romantic Rain Dance Looks Straight Out Of A Bollywood Film)