Ananya Panday's 'then vs now' pictures with her BFFs, Suhana Khan, Navya Naveli Nanda and Shanaya Kapoor are too adorable to be missed!

Growing up with the people you know since your childhood and holding on to them forever is the biggest achievement one can have in their life. Often in the rat race of life, we end up losing the people, who have seen us from the time, when probably, we could not even walk or talk. We get so busy in the monotony of our life that it becomes obvious to lose touch with people. However, one thing that we love about B-town kids is the fact that they all hold a close and special bond with each other and have held on to each other, no matter the distance. (Also Read: Karan Patel's Daughter, Mehr Gives Exactly Same Expression Like Her Daddy In This Adorable Picture)

Shah Rukh Khan and Gauri Khan’s princess, Suhana Khan and Chunky Panday and Bhavana Pandey’s actress daughter, Ananya Panday, Sanjay Kapoor and Maheep Kapoor’s daughter, Shanaya Kapoor shares a similar bond, where despite the distance, the three are still the closest to each other. They are BFFs since childhood and we often spot them vacationing together, partying like crazy, hanging out with their families to chilling out together. They like to call themselves Charlie's Angels. And it is often that Amitabh Bachchan’s granddaughter and Shweta Bachchan Nanda’s daughter, Navya Naveli Nanda joins them too. 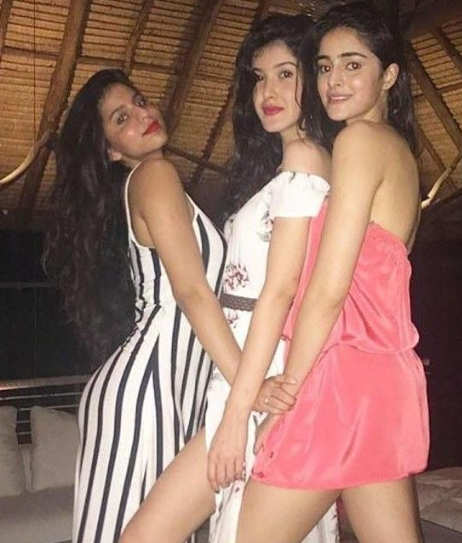 Time literally flies within a blink of an eye! Ananya Panday’s recent IG post proves the same. Taking to her IG handle on January 28, 2021, Ananya shared two pictures with her girl gang. While one picture was a recent one, where Ananya can be seen clubbing with Suhana, Navya and Shanaya, the other one was from their childhood days from a beach vacation. While in the first picture, the girls can be seen all dressed up in their party clothes, whereas, in the second picture, the four angels can be seen in their swimwears, looking cute. Sharing the picture, Ananya wrote, “Nothing really changes (except I don’t bite Suhana’s head anymore...ok maybe I do sometimes.” She was flooded with sweet comments from the family and friends. While Suhana wrote, “Uhh and I got taller”, Navya wrote, “Woooo.” 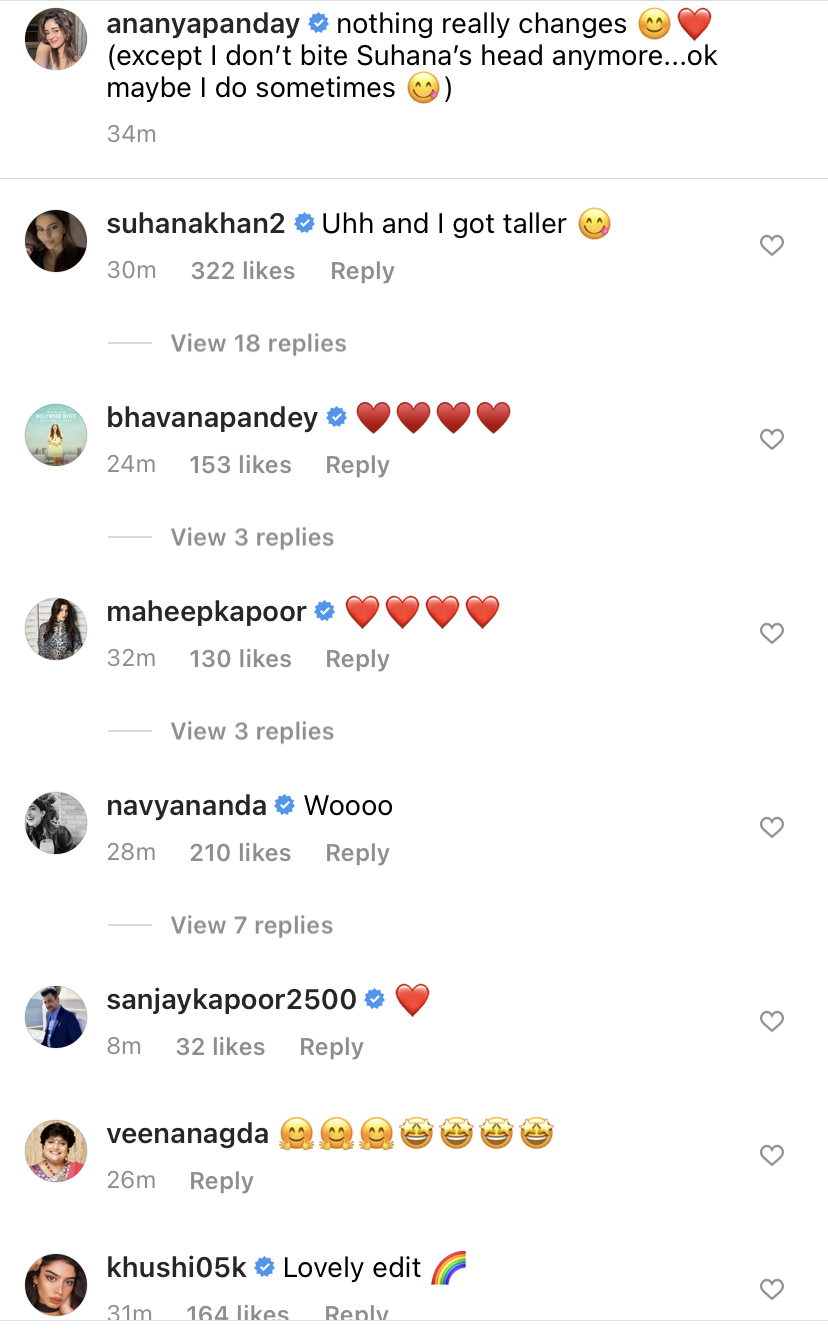 On the occasion of Ananya Panday's birthday, her bestie, Suhana Khan was at her quirky best as she had posted a fun challenge video on her IG stories to wish her. In the video, we could see Suhana, her baby brother, AbRam, Ananya and Shanya taking the 'Put a finger down if you have ever been rejected' challenge. Everyone but Ananya put their finger down on the question (meaning they've been rejected once). Corroborating with the same and giving it a funnier touch, Suhana had written, "When the 7-year-old have been rejected, but the 22-year-old hasn't. teach us your way pls @ananyapanay." Apart from this Suhana had also posted a gorgeous picture with besties, Ananya, and Shanaya posing like divas, for the camera from a party and had written, "Love you forever @ananyapanday" atop it. (Recommended Read: Karan Johar's Kids, Yash And Roohi Does 'Namastey' To The Paps And It Melted Our Hearts [Video]) Back in 2019, at the India Today Mind Rocks Indore, Ananya had expressed her immense desire to act in a movie with her best friends, Suhana and Shanaya. The actress had also revealed that she wants to do a girl-version of Dil Chahata Hai. In her words, “I want to do a girl-version of Dil Chahta Hai with Suhana and Shanaya. Or Zindagi Na Milegi Dobara. That will be a lot of fun.” Well, no wonder it is an exciting prospect and also the chemistry between these three will be impeccable on the big-screen knowing the fact that they’re BFFs in real. (Don't Miss: BB 14: Eijaz Khan Reacts To Paras Chhabra Slamming And 'Bad Mouthing' His Ladylove, Pavitra Punia) 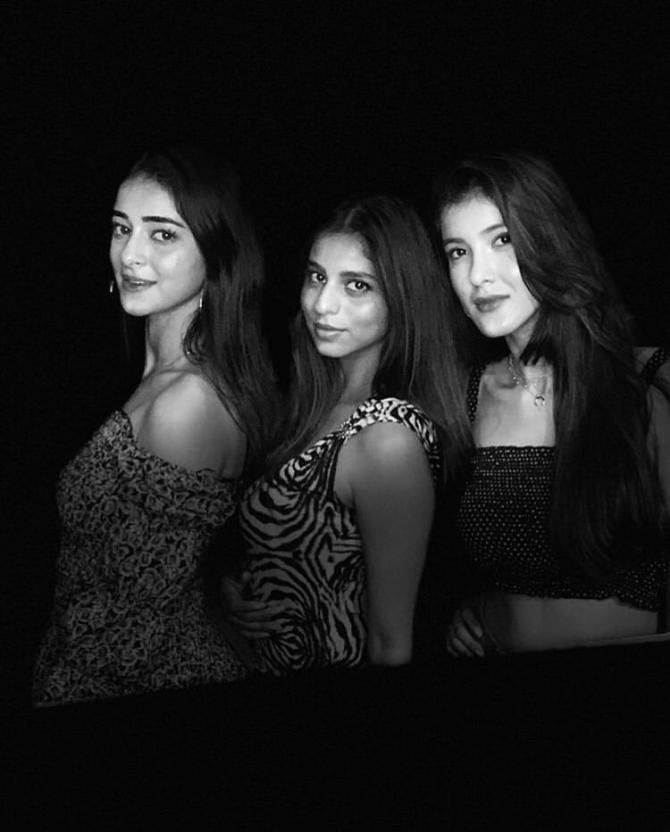 Do you also share a similar bond with your childhood friends? 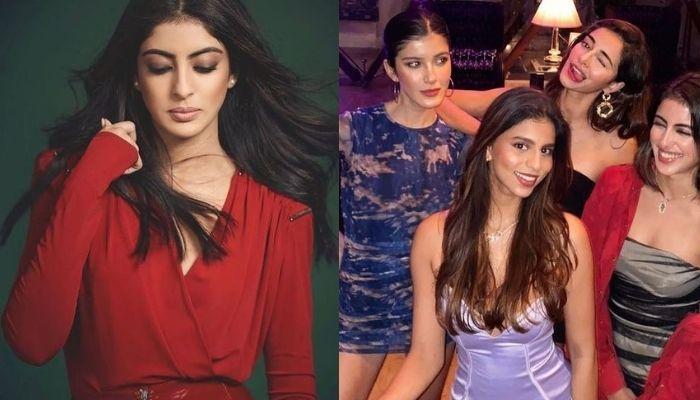