Nitu Uppal, who is also a lawyer by profession, chose the fashion designer, Sabyasachi Mukherjee, to fulfil her dream wedding ensemble. Check out how stunning she looked!

Every bride wants her ensemble to be such that people remember her for years and look up to her dulhan ka joda or call her up before their D-day to take suggestions as to where she had selected her outfits from. Whether it is the outfit, makeup or the jewellery, every guest that comes to the wedding notices all of these to take inspiration from the way the bride had looked at her wedding. And nothing feels better than to be able to exude some major styling goals for all the would-be brides out there.

Such as the charisma that our bride, Nitu Uppal had created through her wedding ensemble, that even after two years of tying the marital knot, she is remembered because of the way she had carried herself. Recently, pictures from her wedding photoshoot got shared on the official page of Brides Of Sabyasachi. She looked absolutely stunning in her red lehenga from the house of the ace designer, Sabyasachi Mukherjee. Every Indian girl dreams to be a Sabyasachi bride and Nitu left no stone unturned to fulfil this dream of hers and rocked the look in her royal lehenga. 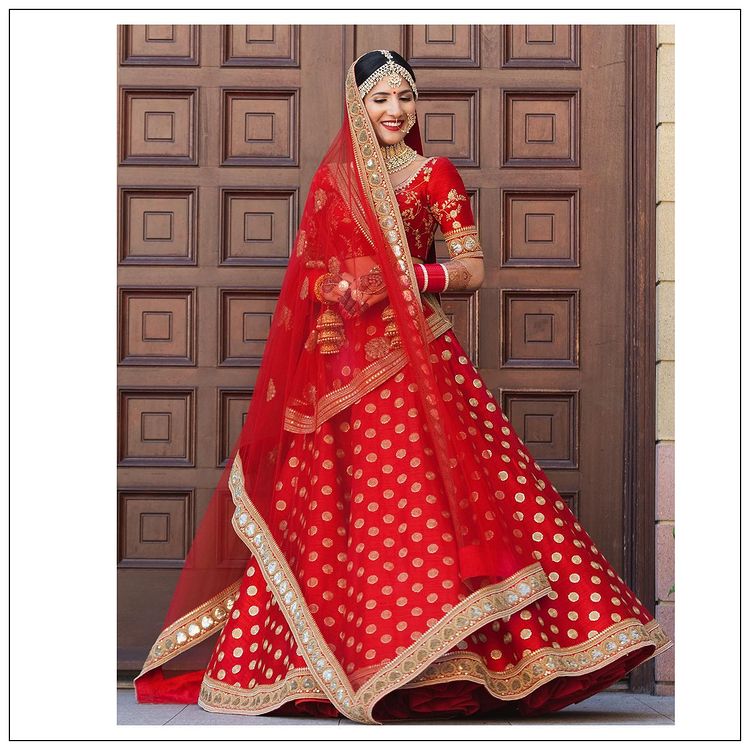 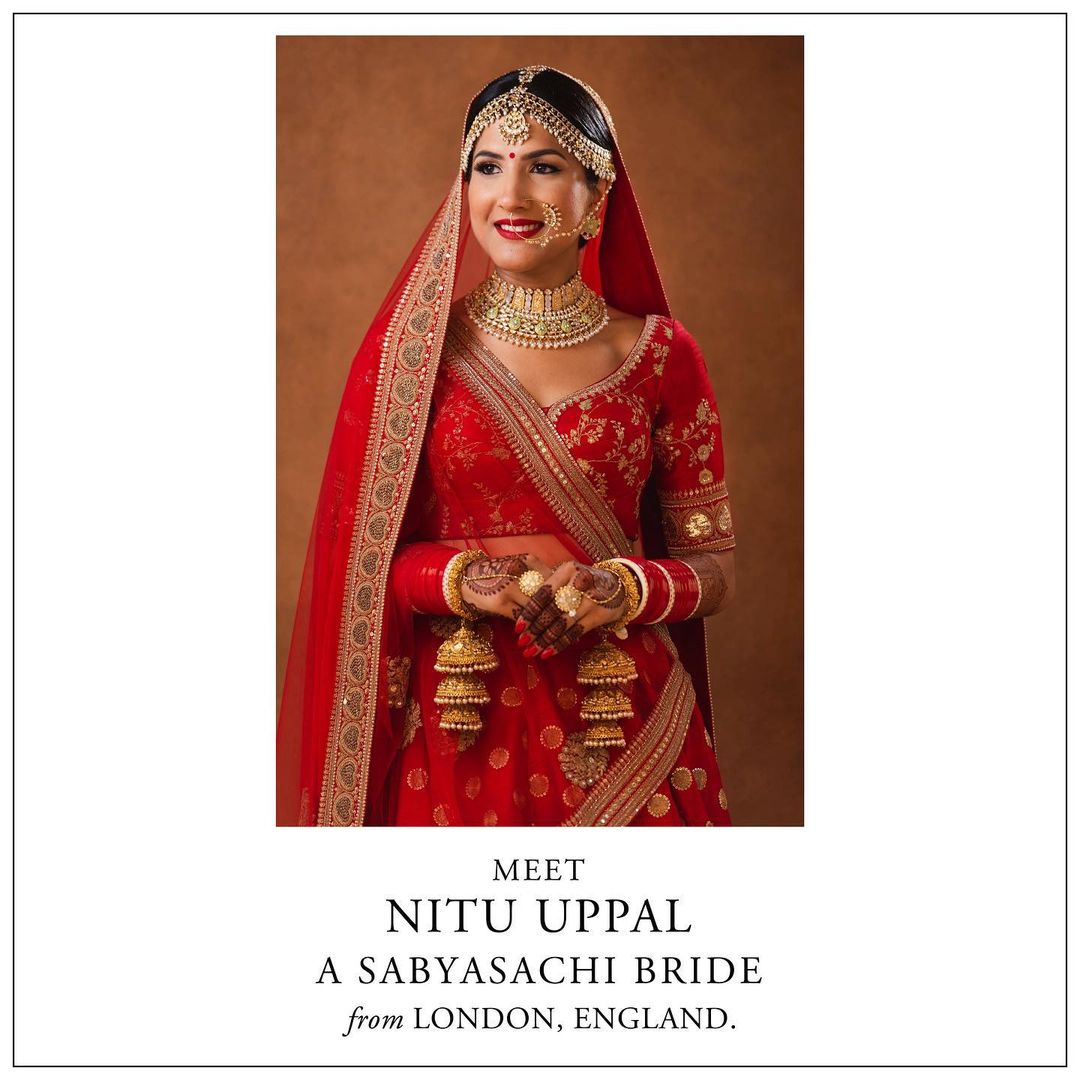 Besides being a Sabyasachi bride and slaying the red lehenga look, what really differentiates her from the crowd is her profession. Meet our bride, Nitu Uppal from London, who is a lawyer by profession, ditched her mundane black and white courtroom uniform and donned this lehenga, and inspired many ordinary girls out there that if she could carry it well, so can they. She got married to her soulmate, Nash Jandu, in an Anand Karaj ceremony in August 2019. Just like any other girl, who dreams of wearing a red outfit for her wedding, Nitu also chose a red lehenga to slay her look. And who, other than the ace-designer, Sabyasachi Mukherjee, could have done justice to her look! The entire skirt of her lehenga was filled with circular zari work, and that reminded us of Anushka Sharma's red saree from her Delhi reception. Not to forget the blouse that was embroidered with golden thread, and the house of the fashion designer did a fantastic job in making the thread work stand out on the red blouse. The dupatta was kept simple with a broad golden zari on the edges of it. 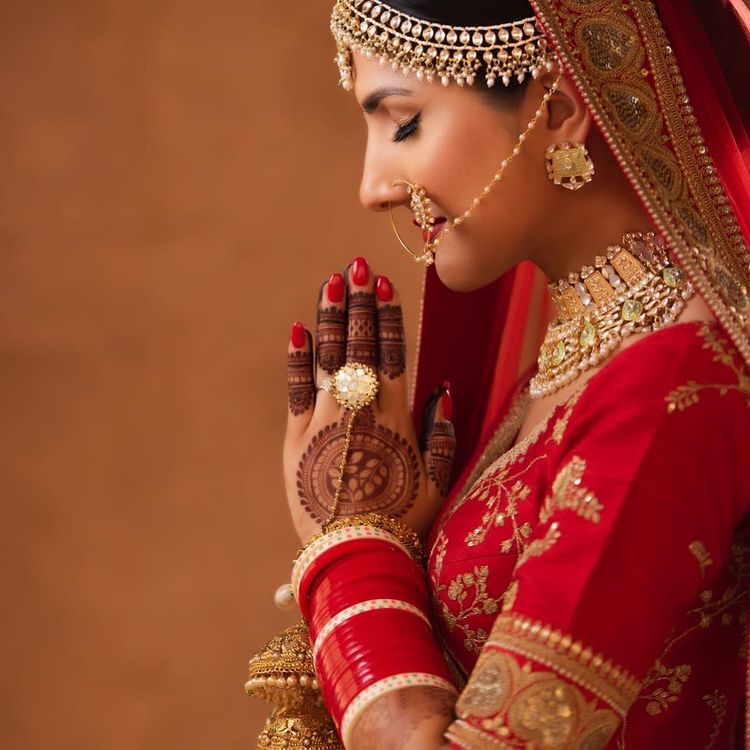 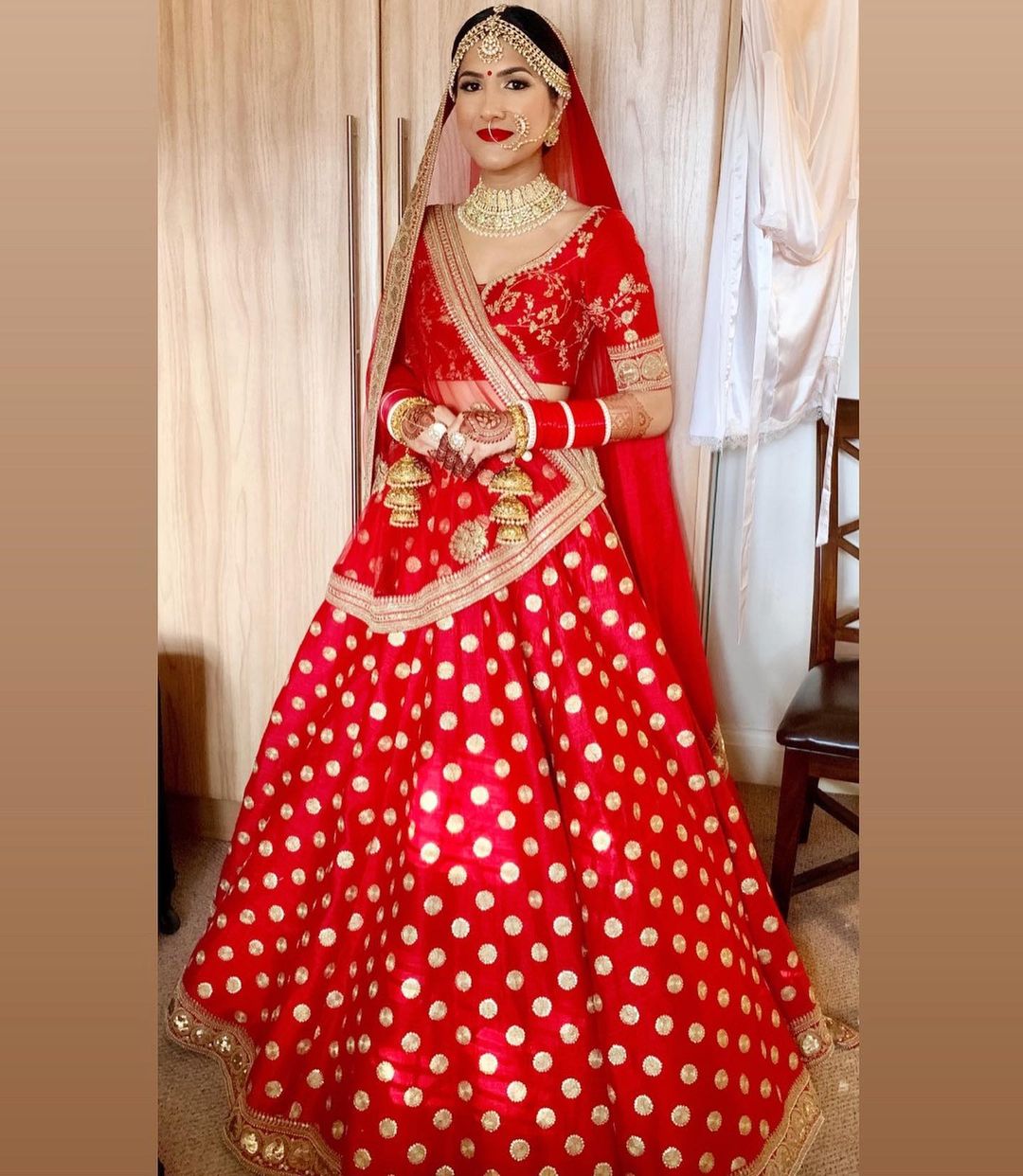 Besides the lehenga, our lawyer bride, Nitu Uppal, had preferred to keep her look sober. She had paired her outfit with a broad kundan choker that was enhanced with mint green meenakari and pearl work, and to go with her necklace, she had carried simple round kundan studs. The matha patti and nath were also chosen in coordination with the choker, and the earrings and Nitu looked absolutely gorgeous. The red chooda and jhumka kaleeras gave a look that enhances the magnificence of every married girl. For makeup, Nitu preferred to keep it minimal but the red lipstick added to her beauty! 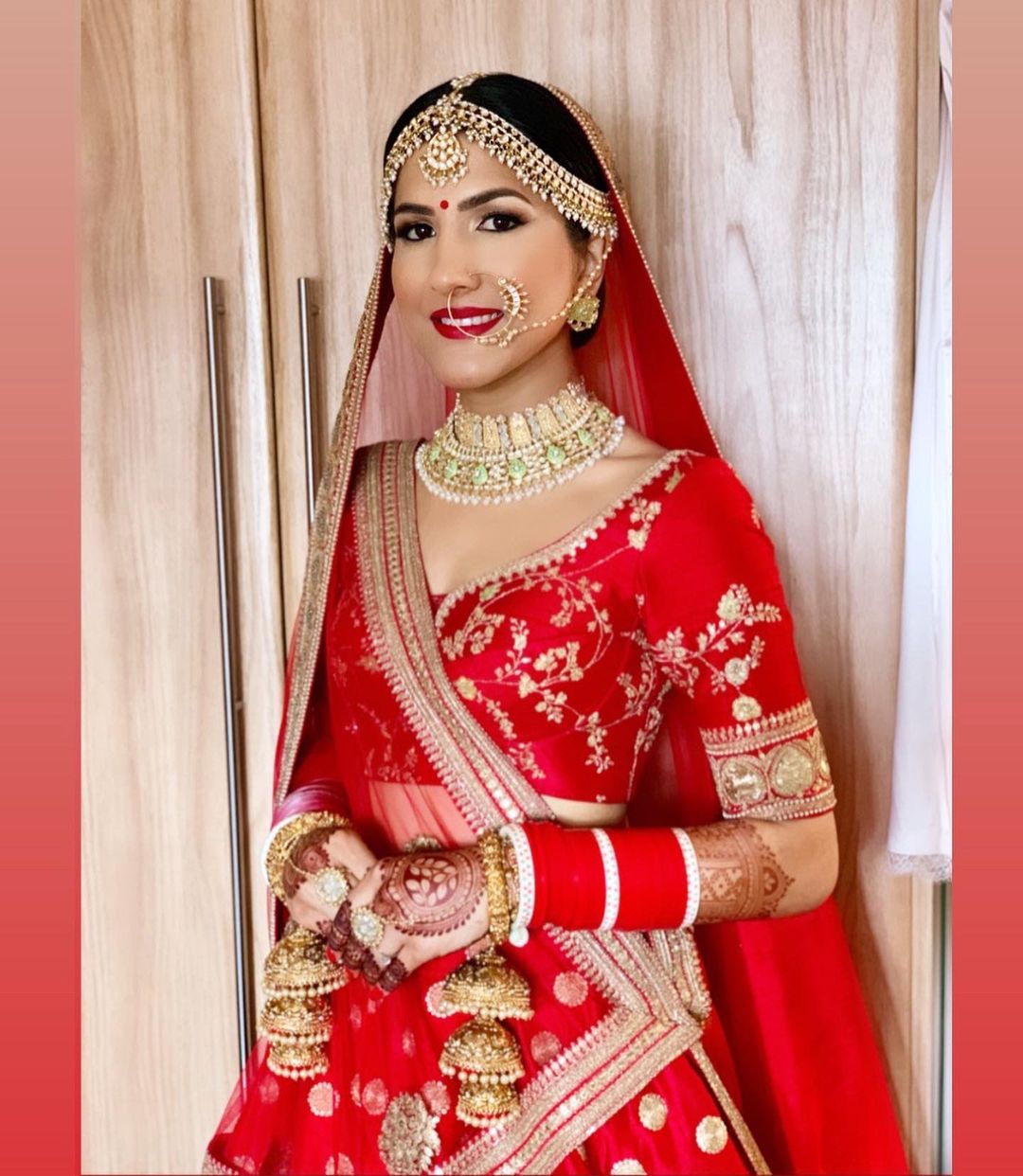 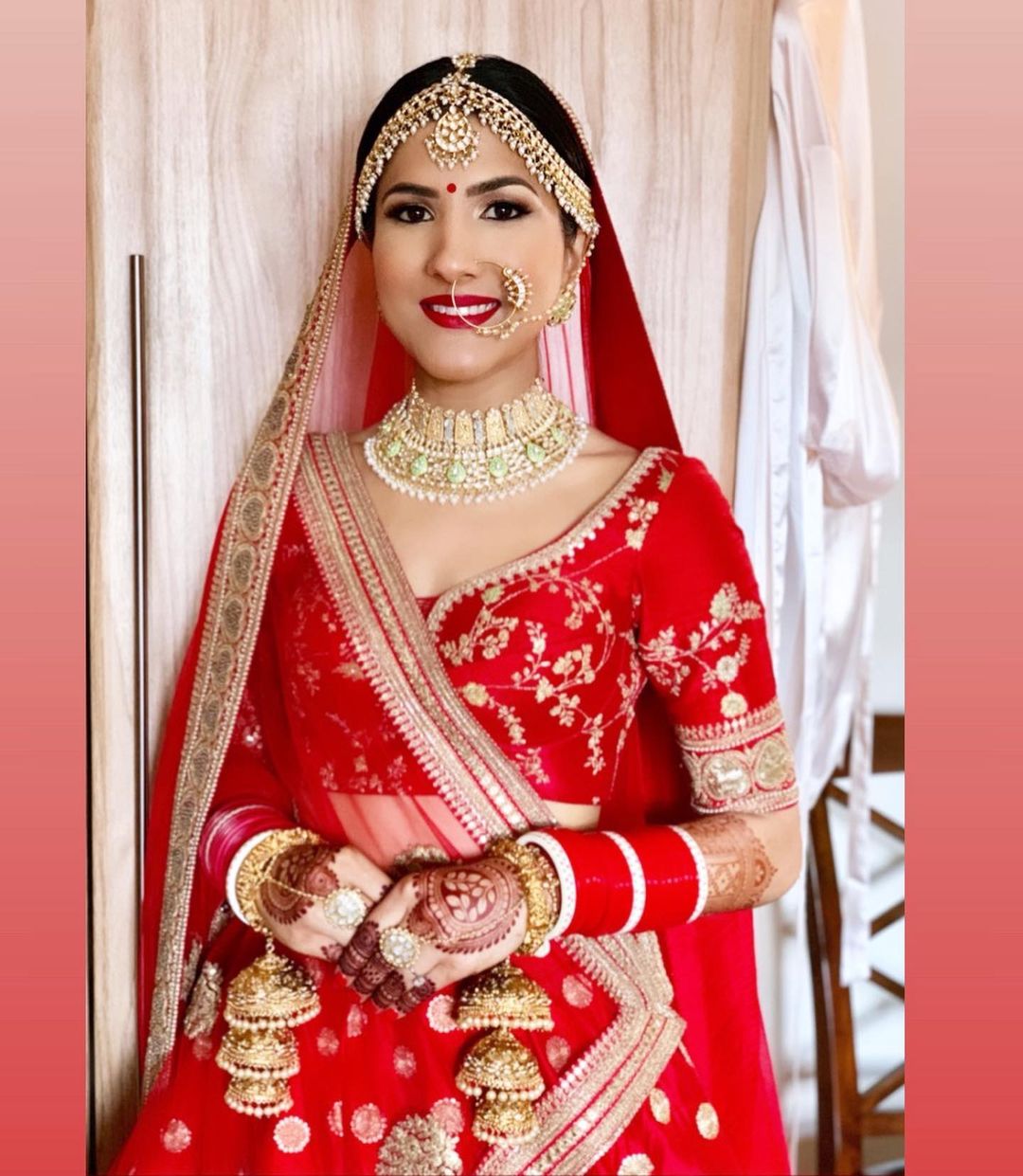 Unlike the general stereotypes, Nitu Uppal broke the general belief that only a celebrity can nail the look in a Sabyasachi outfit and showed it to the world if one wants to style themselves in outfits from the designer, they can surely go for it. If you are someone, who wants to keep her wedding look simple, you can definitely take inspiration from the way she had styled herself. Sabyasachi Mukherjee has changed the bridal fashion game forever and for good. From Anushka Sharma’s pink-hued wedding lehenga to her red Banarasi saree, Sabyasachi had hit the ball out of the court and had become everyone's favourite. Not that Sabyasachi was not a big shot in the fashion and bridal world