Neha Dhupia is one mommy, who has been trying her best to hide her daughter, Mehr's face from the media flashes, and this has created a cute situation at her work-from-home. Check out! Bollywood industry is filled with cute little munchkins these days and we simply wait to get a few glimpses of them. They have taken over not on the hearts of their parents, but also the hearts of their parents’ fans. The internet goes crazy over their pictures and videos, and their popularity has surpassed every level. While most of the celebrities don’t mind sharing pictures and videos of their tiny tots, Neha Dhupia is one mommy, who has been trying her best to hide her daughter from the media flashes and avoids revealing her face. (Also Read: Baby, Ayat Tries To Say 'Hi Papa' In The Video Shared By 'Papa', Aayush Sharma On Daughter's Day)

For the uninitiated, in May 2018, when the nation was busy gushing over the wedding ceremonies of Sonam Kapoor Ahuja and Anand Ahuja, the wedding of Neha Dhupia and Angad Bedi had come as a sweet surprise. On May 10, 2018, Neha Dhupia had tied the knot with Angad Bedi in a low-key, hush-hush, Anand Karaj wedding. The couple had announced it on their respective social media handle. After 6 months of their wedding, Neha and Angad had welcomed a little doll in their lives, lovingly naming her as Mehr Dhupia Bedi. Since then, their little wonder has taken over their world. 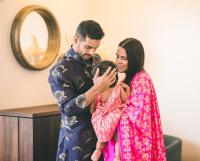 Neha Dhupia and Angad Bedi are working parents and yet ensure that their baby is always surrounded by her parents. When Neha is working, Angad takes care of their daughter and vice-versa. But for Neha, the challenges of being a working mom, sometimes get real as recently, Mehr crashed into her mommy’s at home photoshoot session. Neha took to her IG stories to share a Boomerang of her at home photoshoot session, wherein her daughter, Mehr ended up entering the frame to have some fun. The little girl looked cute in her pink onesie as she rushed towards her mother and Neha was quick enough to cover her daughter’s face with her hands. Sharing the video, Neha wrote, “The truth behind work from home… @mehrdhupiabedi” followed by pink hearts emoticon atop it. Take a look:

This is not the first time when Mehr interrupted her mommy during her shoot. On May 27, 2020, Neha had taken to her Instagram handle and had posted a video from the live audition. In the video, we could see Neha Dhupia and her co-judge, Nikhil Chinapa auditioning a contestant and in the middle of the audition, the actress' little girl, Mehr had decided to meet her mommy. Mehr had cutely entered the frame and Neha had tried her best to make her leave and it had left her emotional. The actress had written her work-from-home experience in the caption that could be read as "#BUSTED !!! ... #workfromhome gets real!!! Especially when your daughter walks into a live audition and decides to pull your earrings and wants her mama back to play!!! Once a reality show always a reality show. #roadiesrevolution #gangneha #worklifemeetsmomlife." (Don't Miss: Neena Gupta Reveals Why She Decided To Get Married At 50 And Daughter, Masaba Gupta's Reaction To It)

In an interview with ETimes, Angad Bedi had showered praises for his wife, Neha Dhupia for being a hands-on mommy. He had shared that Neha is a brilliant mother as she has raised Mehr in the most passionate way. The actor feels that Mehr is an extension of Neha's personality more than his. He had further went on to praise his wife, Neha and had stated that she has put in a lot of effort from the time she has been carrying Mehr in her womb to her delivery to looking after her to taking Mehr along whenever she is shooting out. The actor had also stated that his wife tries to spend maximum time with her. Angad had also shared how his 16- months-old daughter, Mehr has started picking up words and the emotions and had given the credit for the same to his wife, Neha. (Recommended Read: Mira Rajput Kapoor Wishes Her Baby Girl, Misha On Daughter's Day, Hopes To Trouble Her 'Pops' Always) 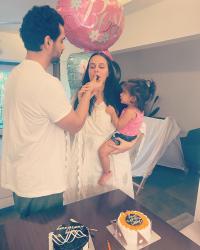 All working mothers can relate to the work from home experience of Neha Dhupia!