There could be no more blissful feeling for a mother than seeing her baby smile. Newbie parents, Neha Dhupia and Angad Bedi are riding high in life especially after they embraced parenthood on November 18, 2018. Neha and Angad became mother and father respectively when their little baby girl arrived in this world at around 11 am at Women's Hospital, Khar. (Suggested Read: 'Nimki Mukhiya' Fame Bhumika Gurung Had A Secret Roka Ceremony With Her Live-In Boyfriend, Keith)

Neha and Angad revealed the name of their little munchkin and it’s Mehr Dhupia Bedi. Neha shared the following pic and captioned it as, "Mehr Dhupia Bedi says hello to the world." Hubby Angad also shared the same picture, and wrote, "Waheguru MEHR Kare @nehadhupia." Mehr is a Persian name which means ‘blessing’!

Neha Dhupia And Angad Bedi Become Parents After 6 Months Of Their Marriage, Welcome Their Little One 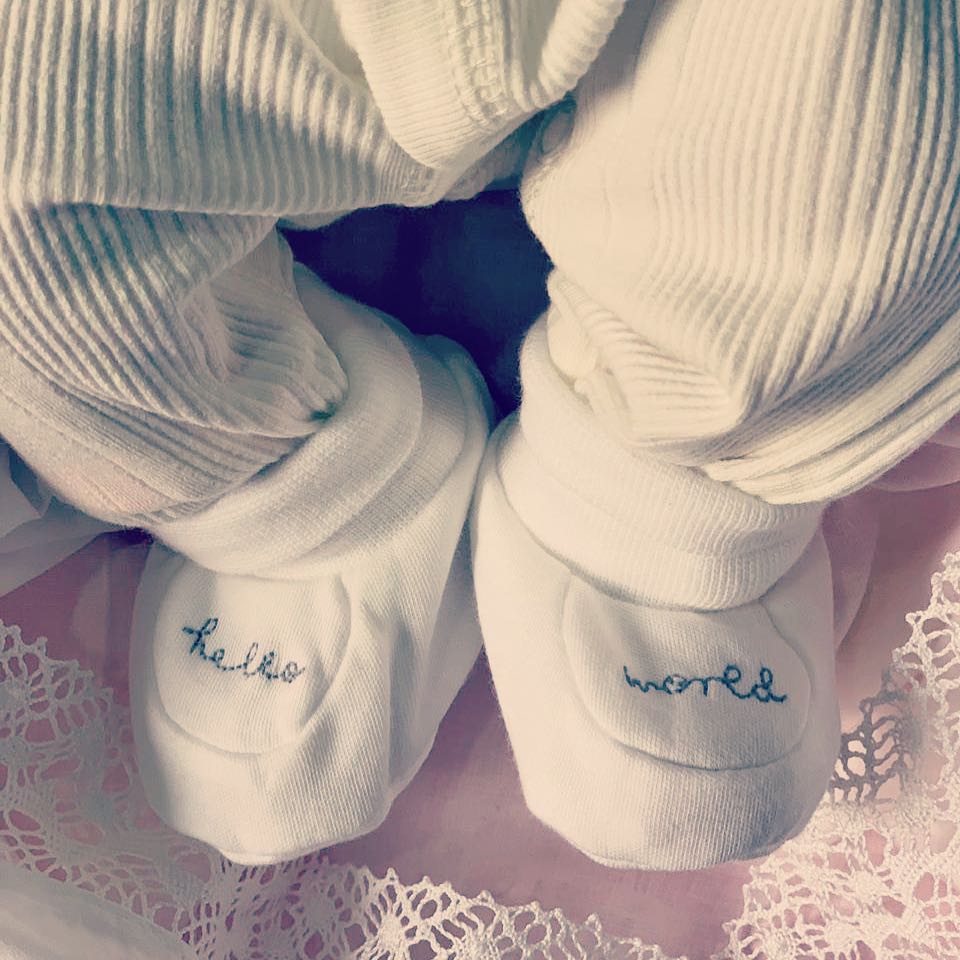 Wishes have been pouring in for Neha and Angad since November 18. An elated Neha took to Twitter and thanked her fans and well-wishers. What caught our attention the most in her tweet is her adorable revelation that Mehr smiled for the first time when her mommy, Neha whispered in her ears, “Everyone says welcome to the world.” Isn't this cute?

After we learnt that Neha and Angad have become parents to a baby girl, we couldn’t keep calm. All that we wanted was to catch the first glimpse of this little tot. And Angad’s father and former India cricketer, Bishan  Singh Bedi took to Twitter on November 20, 2018, and shared Mehr’s first picture. Sharing the photo, Bishan ji wrote, “U Little Beauty MEHR..another Lifeline for Grandparents...Both Maternal & Paternal..Aren’t we Blessed..?!! Yes All of it by Guru’s MEHR Only..GodBless Little One..Welcome to this Journey..Ordained by Almighty WaheGuru!!” 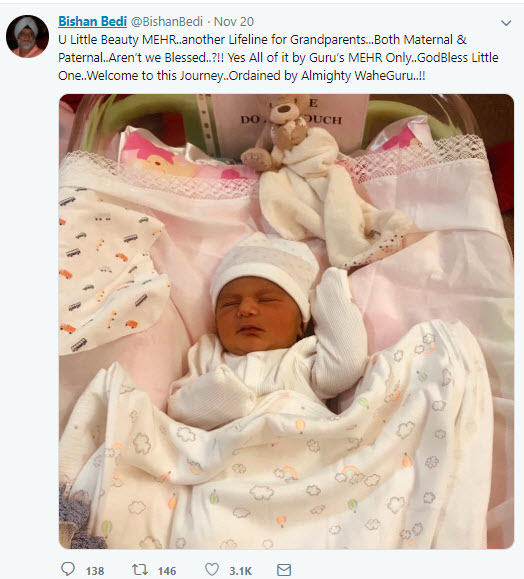 A day later, on November 21, Bishan ji also thanked fans and well-wishers by tweeting, “We wish to thank everyone who sent in messages of Goodwill & Blessings fr Guru’s MEHR on our Families..Yes most Profoundly we are Grateful to U All..now & Always..MEHR is 2nd Lifeline after SUHAVI who gave us fresh impetus 4yrs ago..we’re Truly Blessed. GodBless All Always.!!” 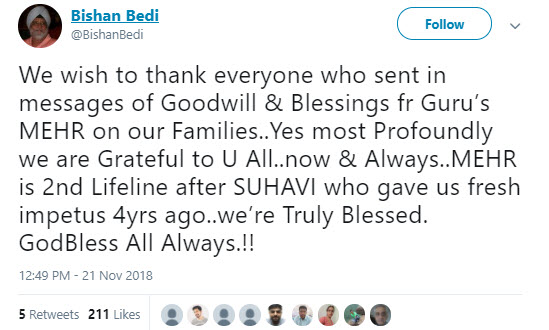 A couple of days after Mehr was born, Angad shared with the fans that both ‘his girls’ are doing well. He took to Twitter and shared, “The last two days have been very overwhelming. @NehaDhupia and I have been blessed with a beautiful baby girl.T hank you all for your wishes and love that is coming our way. Both my girls are doing really well.” (You May Like: Deepika Padukone And Ranveer Singh Bangalore Reception, His Reply Is Epic When Paps Asked Solo Pics) 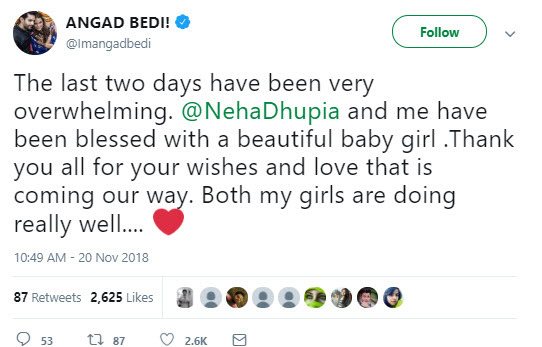 During her pregnancy phase, in an interview, Neha was asked if she and Angad have finalised any name for their baby, she replied, “We have yet not decided what will be naming our baby. We don't know and even the gifts we are receiving has 'baby' written on them, so ya, we haven't thought about it yet.” The 38-year-old actress also added that she wants to take motherhood as it comes and said, “For now I am only thinking about diaper changing and feeding the child”. 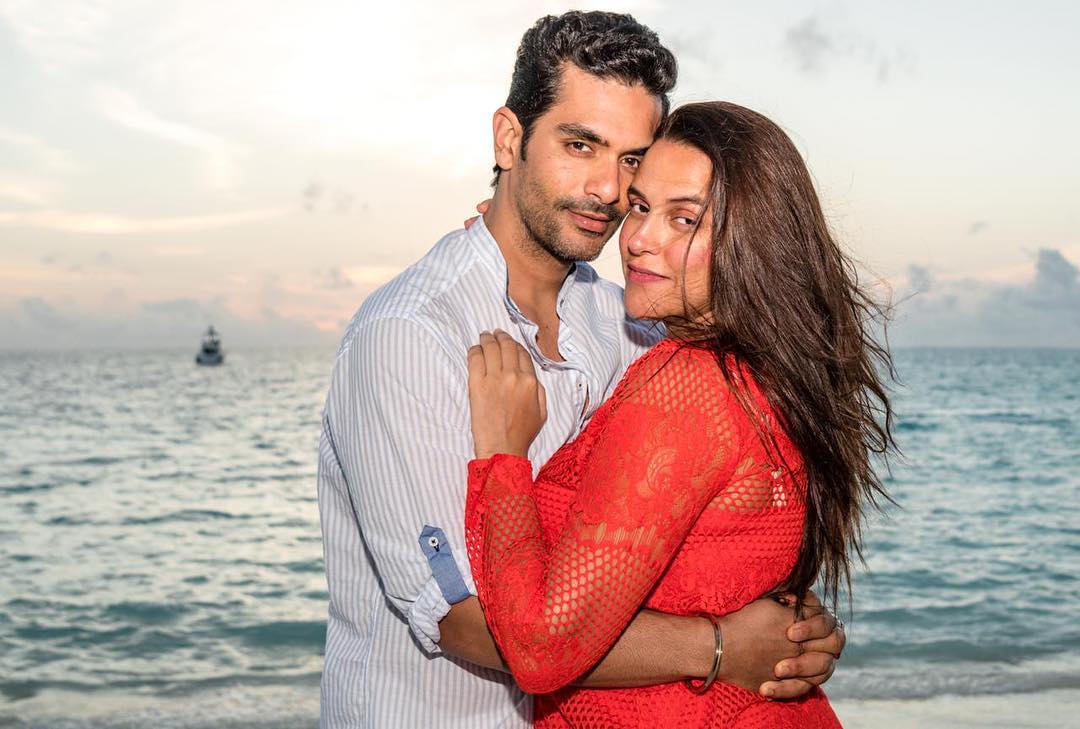 Post Neha and Angad’s secret wedding on May 10, 2018, news started floating that the real reason behind their hush-hush marriage is her pregnancy. A report then claimed, “Neha is pregnant and the news will come out in a while. The reason why they got married so quickly was because of this.” In fact, even Neha’s father, Pradip Dhupia came out in the public and refuted the news by stating, “No no... there is no such thing at all. Since the two got married early, people are thinking otherwise. But there is no such thing. People will keep talking about things and spread rumours as per their wish.” However, as they say, you can’t hide the truth, and hence Neha and Angad themselves shared the photos of Neha’s maternity shoot and confirmed the news. In an interview, Neha revealed the reason behind hiding her pregnancy and said, “I was worried people would stop offering work. It was a good thing my bump wasn’t showing till the sixth month because appearances matter here, and one might be assumed to be unfit for a job. Fortunately, my energy levels are high.” (Don't Miss: Nick Jonas Has Left For India For His Destination Wedding With Priyanka Chopra)

Many congratulations to Neha and Angad for embracing parenthood. 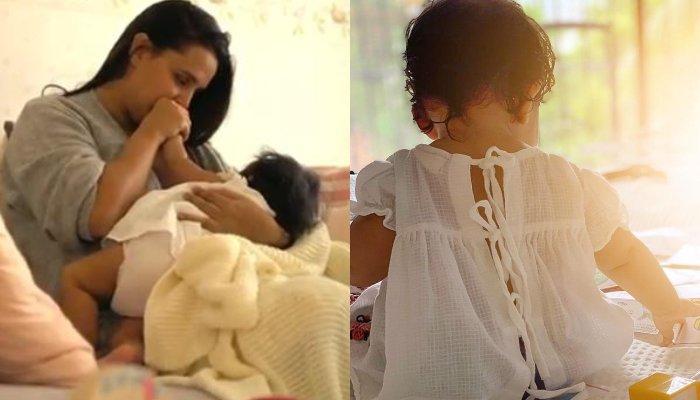 Last year, was only about new innings for Neha Dhupia. From surprising us with the news of her hush-hush May wedding with Angad Bedi to her sudden announcement of pregnancy, 2018 was undoubtedly Neha’s year! The actress has, from the very beginning been extremely vocal when it comes to expressing