Neeti Mohan (now Pandya) and her hubby, Nihaar Pandya have now been blissfully married for 3 months. Their best friends from the industry posted a super-fun incident from their wedding.

Indian weddings are not ceremonies, but can truly be termed as festivals! Have you seen the fun, galore, colours and the huge amounts spent on Indian weddings to make it a pompous affair? Celebrations go on for weeks and so is the enthusiasm. Apart from family members, the ones who make weddings full of fun and laughter are our best friends! We mean, we cannot imagine a wedding with our close pals by our side. And the same happened at Fakira singer, Neeti Mohan Pandya’s wedding with her beau, Nihaar Pandya. (Do Read: Sharad Malhotra Shares How Ripci Malhotra Reacted To His Female Fans' Responses To Their Wedding)

Speculations had been going on for quite a while that Neeti Mohan and Nihaar Pandya were soon to get married. Converting the rumours into news, the duo had finally confirmed about their wedding in the last week of January 2019 about their February 15 wedding and so they did! Five days later, on February 20, 2019, both Neeti and Nihaar took to Instagram and had posted a beautiful picture from their wedding, colour coordinating with each other in shades of pink, who were all smiles for the camera. Sharing the picture, the doting wifey had written, “With the blessings of family, friends and well-wishers, we are blissfully married. Dad's health is getting better each day. The Mohan and Pandya family THANK YOU for your constant love and support.”

Neeti Mohan (now Pandya) and her hubby, Nihaar Pandya have now been blissfully married for 3 months and more than them, their best friends from the industry can’t keep calm! And this is how we came to know about something super-fun that had happened at the Mohan-Pandya wedding. Neeti’s close friend, Harshdeep Kaur took to Instagram and shared a fun dance video from their wedding, wherein many known celebs of the glamour world like Jonita Gandhi, Harshdeep Kaur, Benny Dayal, Shekhar, Tahira Kashyap are all singing to the song Gud Nal Ishq Mitha and dancing to it themselves! Sharing the video, Harshdeep wrote, “When DJ wala babu doesn’t play your song... We sing it ourselves. Major throwback to our impromptu practiced performance on #IshqMitha at @neetimohan18 & @nihaarpandya Ki shadi. Happy 3 months Anniversary #NeeHaar.”Neeti too, had posted the same video and had captioned it as, “Hahahaha BEST friends ho to aise ho. THANK YOUUUUUU you all made the wedding extremely special n memorable. Love love love to all of you.” Here’s the video:

On completion of the 3 months of their marital bliss, Nihaar Pandya took to Instagram and posted a beautiful picture of the couple from their mehendi ceremony. The adorable picture had Neeti Mohan dressed in a green salwar, with a multi-colour dupatta and mehendi-clad hands, with her hubby, Nihaar Pandya, who was wearing a grey bandhgala, holding him from behind her back! The Manikarnika actor had captioned the video as, “Months and the party continues.. @neetimohan18 you are amazing”, while Neeti commented, “The best place to be ...in your arms.” (Must Read: Tahira Kashyap Reveals She Has Given Up On Her Marriage With Ayushmann Khurrana Many Times) 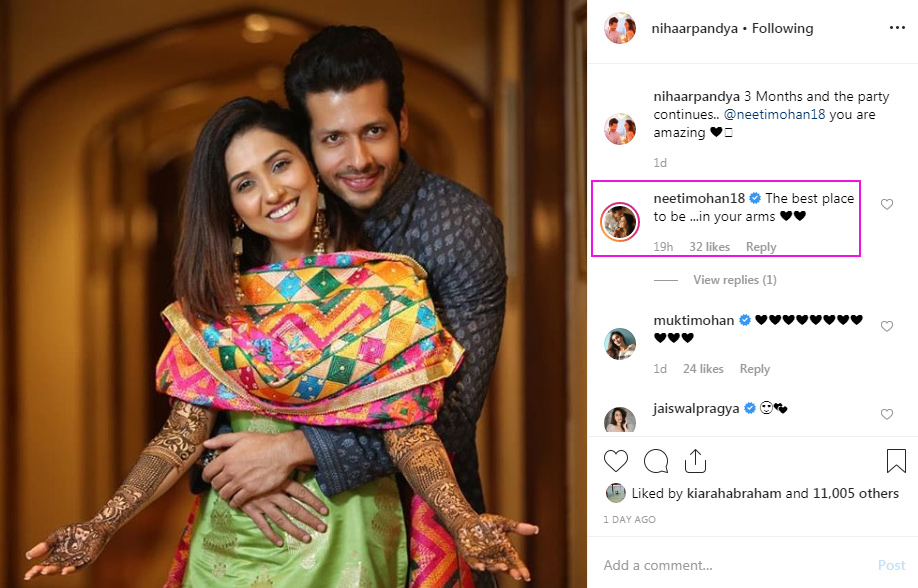 On March 15, 2019, when Neeti Mohan Pandya and Nihaar Pandya had completed 1 month of their marital bliss, the mister had posted a fun-filled personalised song composed by their industry friends, which was framed alongside a video with glimpses from their wedding. Sharing the video, Nihaar had written, “With you time flies. Today we are 1 month young.. More Love to you.. @shekharravjiani Thank you bhai for this fun wedding song. When you said, it slightly cheesy. Well, in that case, cheesy is the New Amazing A big shout out to @vishaldadlani @bennydayalofficial @harshdeepkaurmusic @jonitamusic @shalmiaow and @shekharravjiani once again for singing #PremSagarMeinNeetiAurNihaar Memory for a Lifetime.. Love you guys Let's meet for the after Party !! Not to forget, lyrics credit to my Father (in law) @bms.brijmohan.”

In an interview with Times Now, Neeti Mohan Pandya had shared her thoughts about getting married. She had shared, “It is great to be married. It’s even better when your life partner and the new family are supportive of your profession. I love being married.” And further added, “It’s been only a month since we got married. Everything is so fresh. All the memories are so precious.” (Also Read: 'Jamai Raja' Fame Sara Afreen Is Expecting First Child After 10 Years Of Marriage, Details Inside) 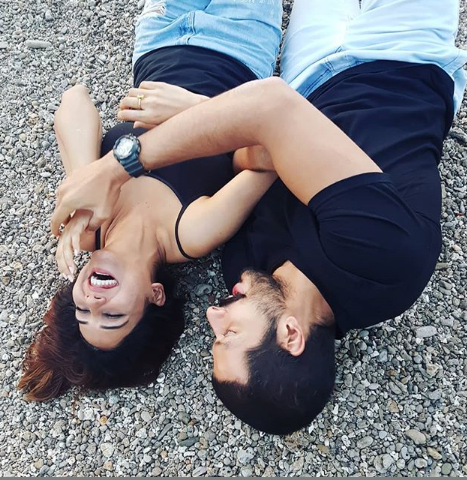 Guys, what is the most memorable incident that happened to you at a recent wedding that you had attended? Fill up the spaces in the comments section!