When you are a part of the entertainment industry, you are always under media scrutiny. People often follow you and keep a tab of your every movement. From your daily outings to your lunch dates, everything becomes a sensation in the media gallery. And this is not just the situation of the B-town biggies, their little kids too become paparazzi’s favourite as media often tried to capture a glimpse of them. We have seen how photographer’s had papped Shah Rukh Khan’s daughter, Suhana Khan when she was not willing to pose. We know how Saif Ali Khan’s son, Ibrahim Ali Khan had almost played hide and seek with paps so that he can skip them. And we have also seen how media wait for Saif and Kareena Kapoor Khan’s little bundle of joy, Taimur Ali Khan. Media is right after star kids, and now to join them is Amitabh Bachchan’s granddaughter, Navya Naveli Nanda. (Also Read: Samantha Akkineni Repeats Her Sabyasachi Outfit For Best Friend, Rana Daggubati's 'Roka' Ceremony)

It is said that Amitabh Bachchan's granddaughter, Navya Naveli Nanda is dating Meezaan Jaaferi, son of Jaaved Jaaferi. Meezan had made his Bollywood debut last year with Sanjay Leela Bhansali’s production venture, Malaal. It is reported that he had also worked as Ranveer Singh’s body double in Padmaavat and is all set to take over B-town. However, Navya and Meezan have not publically announced their relationship, the two often drop sweet mushy comments on each other’s social media activities, making us believe in their love story and fall for their PDA. Navya and Meezan are sending out major couple goals to the youngsters as two are always supporting and boosting each other for their work. As the entire nation is under the lockdown, Meezan is recreating some of the famous Bollywood songs and proving himself to be a great singer and guitarist other than being a fine actor. He recently uploaded his rendition of the famous song, Bheegi Bheegi Raaton Mein. While the audience is going crazy over the song, it was Navya’s comment that caught our attention. Sharing the video, Meezan wrote a caption that can be read as “My late night quarantine routine Will be putting up covers every Friday. Comment below with any requests!! This one is one of my all time favorites ‘bheegi bheegi raaton mein’ by @adnansamiworld #bajateyraho #meezaanscovers." On this, alleged girlfriend, Navya left a heart emoji. We are sure, Navya is impressed by Meezan’s singing skills, just like us. 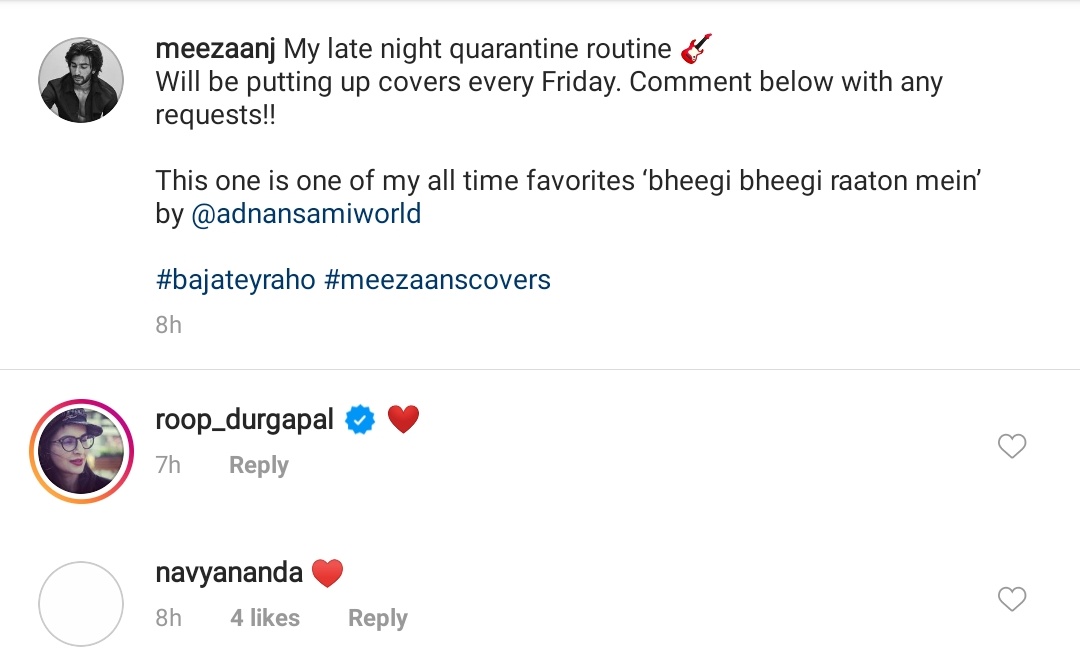 On May 11, 2020, Navya Naveli Nanda had launched her healthcare platform with the name ‘Aara Health’, and a page has been maintained on Instagram. The page had delivered all the details about the founders, who are they, and their mission through their posts. Talking about the venture, then it is an online healthcare platform for women with the help of which they are going to educate, empower, and teaching them about some must health choices. After the launch of their page and platform, Navya’s rumoured beau, Meezaan had taken to his Instagram handle and had congratulated her by writing, “Go follow @aarahealth congratulations!! So proud @navyananda” with a red heart emoticon. Take a look. (Recommended Read: Nawazuddin Siddiqui's Wife, Aaliya Reveals They Are Living Apart Since Last 4-5 Years) 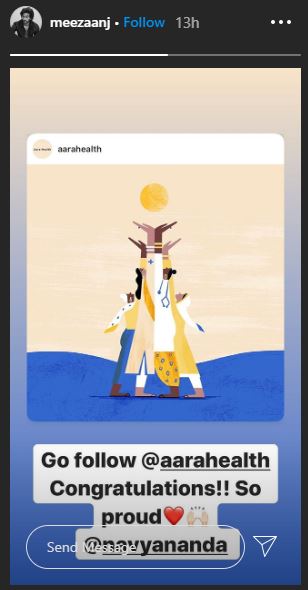 Due to the Coronavirus scare, Navya’s graduation ceremony had gotten cancelled. On May 6, 2020, Navya had graduated from New York's Fordham University. And her mother, Shweta Bachchan Nanda had ensured that her daughter gets a memory of this time and doesn't miss out the graduation fun. So, she had hosted a DIY ceremony for her. Shweta's staff had created a DIY graduation gown, which they had hand-stitched for Navya. Shweta had also made a graduation cap from a black chart paper for her daughter. The doting mother had taken to her Instagram handle and had shared the pictures from the special graduation ceremony and had written, "Class of 2020 - Navya finished college today and since she and everyone else graduating this year won’t get a ceremony we decided to DIY one. With a chart paper cap and a gown hand stitched from scraps of black tenting. I threw on a Fordham (her college) sweatshirt over my PJ’s!! Congratulations baby I love you and am proud of you! Go forth and conquer x (I’m not crying you’re crying)." Take a look at it below: (Don't Miss: 'Ishqbaaz' Actress, Surbhi Chandna Talks About Marriage And Why She Keeps Her Personal Life Private) 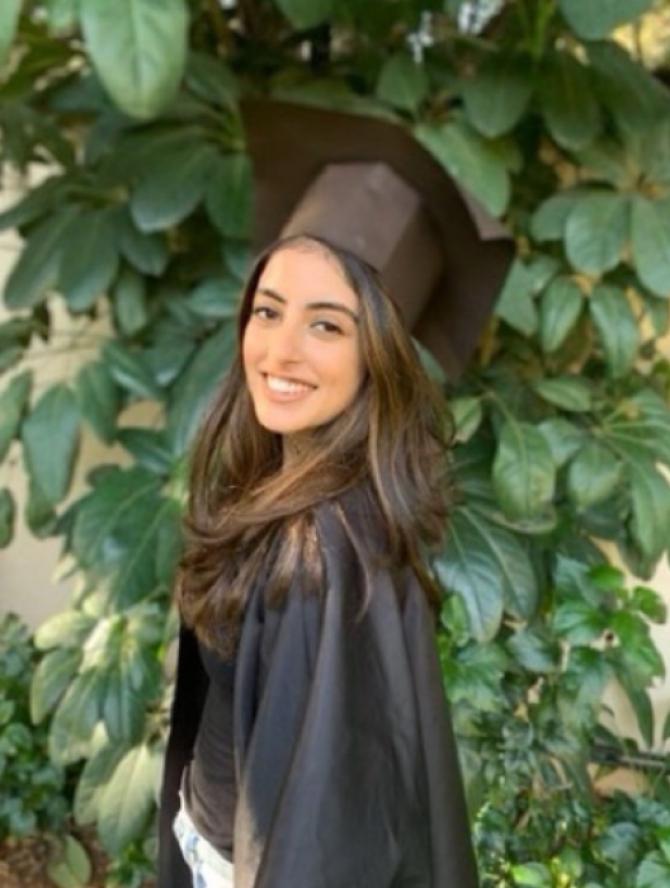 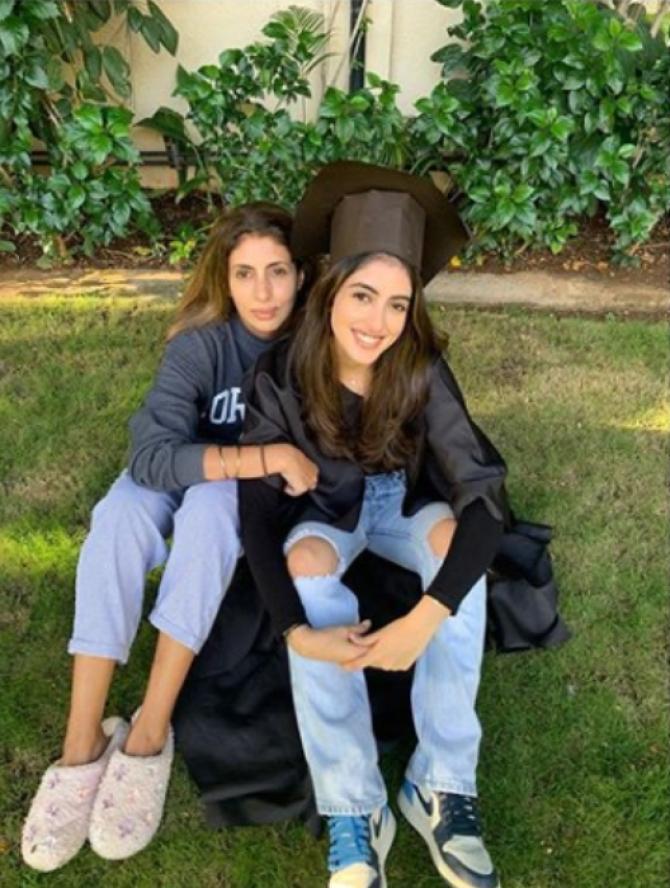 What are your views about Navya and Meezan’s social media chemistry? Let us know!