Disha Parmar has been constantly rooting for her alleged beau, Rahul Vaidya during his stay in 'Bigg Boss 14' house. Now, her co-star-cum-friend, Nakuul Mehta has teased her.

Bigg Boss house has witnessed as many breakups as patch-ups. Often we have seen celebrities finding love in the house and calling it quits with their partner outside the house. It is a rare sight to see a contestant profess his or her love inside the show for their partner outside the BB house. Rahul Vaidya had made the journey of BB 14 memorable when he had understood that the feeling he holds for Disha Parmar is what people call 'love' and had proposed her on the national television. (Also Read: Taimur Ali Khan And Saif Ali Khan Spotted Wearing Same Pullover In Pictures Shared By Kareena Kapoor)

For the unversed, Rahul Vaidya had earlier opened up on his relationship with Disha Parmar and had shared that the two had met through common friends around two years ago, and had hit it off immediately. The two were often spotted hanging out together, which had started the rumours of their dating. While earlier he had said that it will be premature to give any name to their relationship, now, Rahul has openly confessed his love for Disha. The actress too has been supporting Rahul outside the show and has been promoting him. Now, as Disha has penned her feelings about Rahul’s stay in BB house, her co-star-cum-friend, Nakuul Mehta has teased her. Disha has been showering praises on Rahul throughout his BB journey and has been supporting him. Recently, the actress took to her Twitter handle and tweeted to thank everyone, who is supporting Rahul, calling them amazing. She also shared that she feels Rahul deserves to win BB14.  She tweeted, “You amazing people doing so much effort deserve an applaud!! BB14 BELONGS TO RAHUL.” Disha’s friend, Nakuul Mehta was quick enough to tease her as he replied to her tweet, “Also, Disha.” The Ishqbaaaz actor’s funny reply left Disha laughing as she replied, “Hahaha!!” 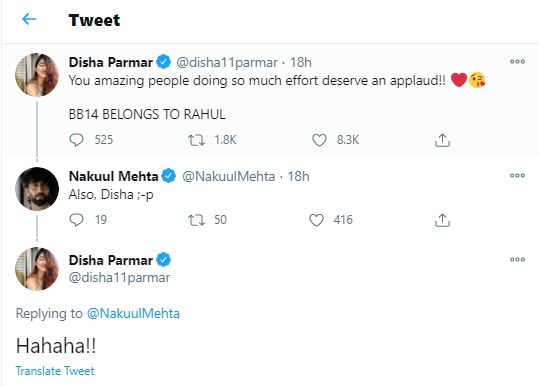 Rahul Vaidya and Disha Parmar are said to be together for some time now, however, the two had never confirmed anything earlier. It was Disha's birthday on November 10, 2020, that her alleged boyfriend, Rahul Vaidya had asked her to marry him on national television. Addressing Disha in the Bigg Boss house and wearing a T-shirt with ‘HBD Disha’ and “Marry me” written over it with a lipstick, Rahul had said, “Today is a very a special day for me. There’s a girl in my life and that that girl’s name is Disha Parmar. God! I have never been so nervous. I don’t know why it took me so much time to ask you – Will you marry me?” Rahul had then turned around, we could see ‘Will you marry me’ written on the back of his t-shirt with lipstick as he had added, “I will wait for the answer.” He had mentioned that he has known her for two years and had said, “I think you are the most beautiful girl in the world.” (Don't Miss: BB 14: Pavitra Punia's Husband, Sumit Maheshwari Claims She Cheated On Him With Paras Chhabra)

After Rahul’s adorable proposal, the rumours of Rahul and Disha’s engagement before he had entered the show had started doing the rounds on social media. A Bigg Boss insider, The Khabri had tweeted, “EXCLUSIVE #DishaParmar is already engaged to #RahulVaidya Even before Rahul Entered the BiggBoss House.” To this, Disha had given a savage reply and had asked the account to stop spreading fake news. She had tweeted, “Calm down! And stop spreading fake news! That’s all.” 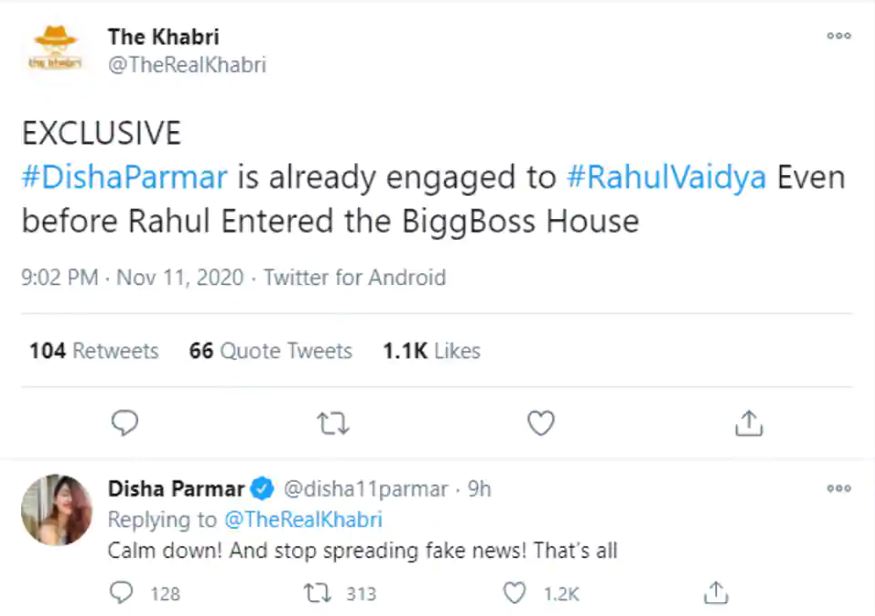 As the fans were eagerly waiting for Disha’s response to Rahul Vaidya’s wedding proposal to her, The Khabri had shared a video of Disha, who could be seen over the moon with Rahul’s adorable gesture. In the video, the actress could be seen excited about her birthday and looking gorgeous in a baby pink skirt and white t-shirt. Disha couldn’t stop blushing when her friend had started teasing her about Rahul’s proposal. (Don't Miss: Anita Hassanandani Flaunts Her Baby Bump In A White Jumpsuit, Steps Out With Hubby, Rohit Reddy) Are you also supporting Rahul Vaidya in Bigg Boss 14? Let us know!