For the 'bhaat' ceremony, Tollywood superstar, Rana Daggubati's fiancÃ©e, Miheeka Bajaj opted for her mother's bridal lehenga and wore it with such panache! Check out Miheeka's mother's emotional post.

Being a woman, 'what to wear' is a constant struggle and it becomes even more stressful when you're getting married! What you like at the designer shops, you can't afford and what you can afford, you don't like. Relatable, no? Though you might have searched every single shop to finalise your wedding lehenga, you have missed out on the most important place i.e., your mother's closet. Using or revamping your mother or mother-in-law's vintage wardrobe brings a timeless vibe to the wedding attire and it surely touches the soft corner for us! (Also Read: Shilpa Shetty Grooves To 'Sauda Khara Khara' With Mom-In-Law On Her Birthday, Viaan Kundra Joins Too)

Remember how Kareena Kapoor had revamped her mother-in-law, Sharmila Tagore’s vintage sharara for her nikaah? Now, we have another celebrity, who is added to the list of thoughtful brides and she is none other than Rana Daggubati's fiancée, Miheeka Bajaj! It was in May 2020, when Rana and Miheeka's relationship was formalised with a roka ceremony. Posting a picture with his beautiful fiancée, Miheeka, Rana had written, “And it’s official!!” Miheeka had also posted two pictures from the ceremony and had written, "To the beginning of forever @ranadaggubati" and "My happy place!@ranadaggubati".

'Virata Parvam' Actor, Rana Daggubati Accepts He Has Changed After His Wedding With Miheeka Bajaj

Rana Daggubati Opens Up About His Married Life With Mihika Bajaj, Reveals The Changes He Observed 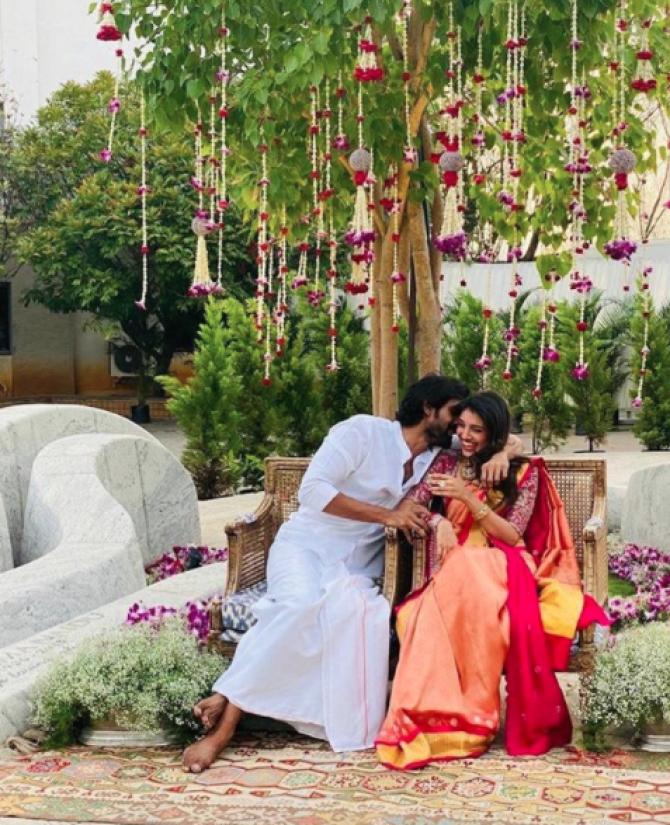 The pre-wedding ceremonies of Rana Daggubati and Miheeka Bajaj have been taking the social media by storm with their pictures and videos. For the bhaat ceremony, Miheeka looked gorgeous as ever in a red and grey lehenga, which she had accentuated with stone-cut earrings. Her outfit was very special as it was her mother's bridal lehenga and Miheeka had worn it with such panache on her bhaat ceremony. Keeping her look all glam yet minimal, Miheeka opted for natural-looking makeup, making for a pure royalty! Sharing the picture of Miheeka, her mother emotionally penned down a post, which could be read as "Baht function wearing my wedding outfit, could not stop crying my baby is all grown up.#BAJaoeD."

On August 6, 2020, Rana Daggubati and Miheeka Bajaj had their haldi and mehendi ceremonies. For the haldi ritual, Miheeka had opted for a Boho look and had picked a traditional yellow lehenga which she had paired with jewellery made of shells. Rana had complemented her in a traditional white shirt and dhoti. Rana and Miheeka's haldi pictures reflected nothing but happiness. For the mehendi ceremony, Miheeka had stunned in a pink lehenga and she had rounded off her look with a beaded maang tikka, big jhumkas, pink lips and open wavy hair. (Also Read: 'Diya Aur Baati Hum' Fame Prachi Tehlan's Unqiue Mehendi Outfit, Her Dance With Nani Steals The Show) 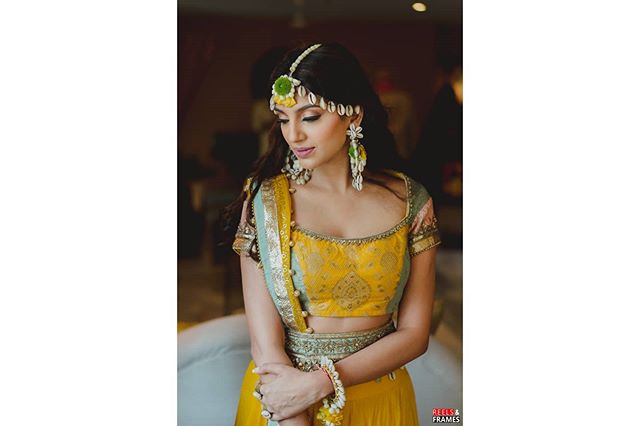 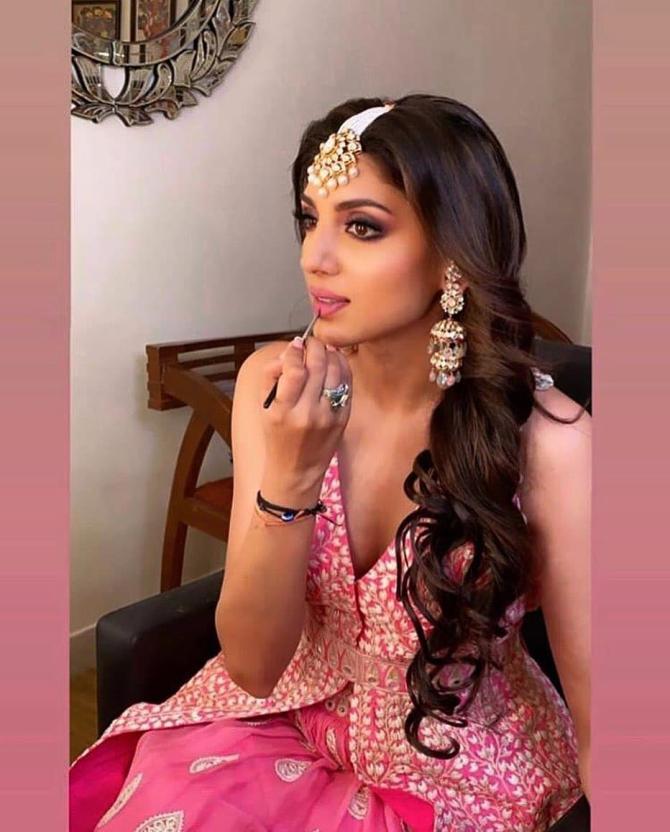 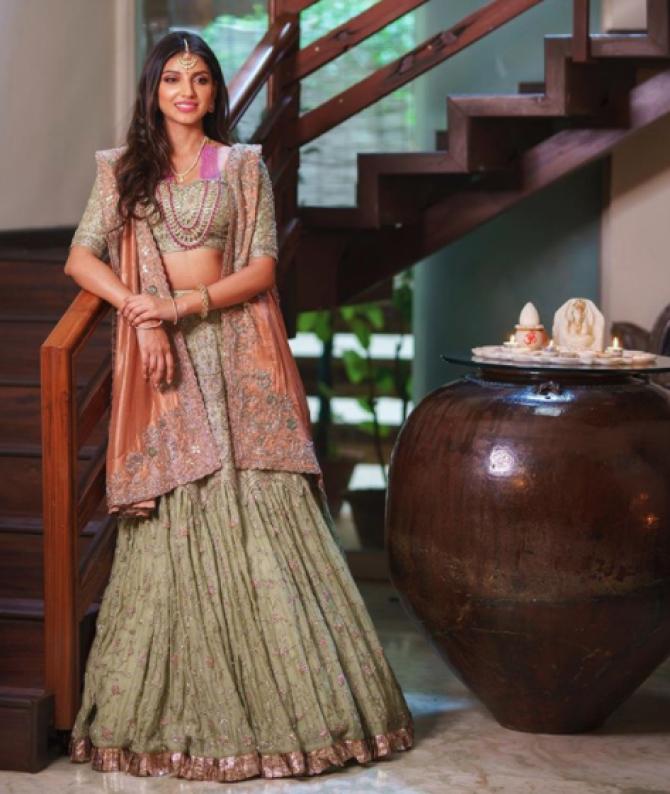 Tollywood superstar, Rana Daggubati's fiancée, Miheeka Bajaj had become the first celeb bride-to-be to flaunt the trend of wearing a mask for her pre-wedding celebrations. Miheeka had accentuated her beautiful mint green Jayanti Reddy lehenga with jewellery by Krsala. Elaborating on Miheeka's picks for the pre-wedding celebrations, the official IG handle of Krsala had described, "Miheeka Bajaj (@miheeka) wears an elegant Jadau mala encrusted with polkis, rubies and pink tourmalines crafted in 18kt gold. Her traditional jadau maang tikka is designed with specially cut rubies and polkis, and the Jadau tips are embedded with polkis and round pink tourmalines. An intricate Jadau Bracelet with polkis set in 22kt gold gracefully rests on her hand." In one of the pictures posted on their IG handle, we could see Miheeka sporting a matching mask, setting #LockdownBridalGoals! (Also Read: Gul Panag Reused Her Mother's Lehenga For Her Wedding And Mother-In-Law's Outfit For The Sangeet) We are quite impressed with Miheeka's vintage outfit choice for the bhaat ceremony and we can't wait to see her as a bride!