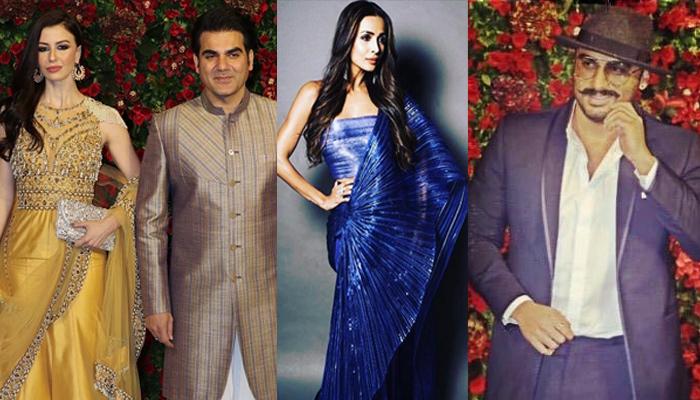 There’s a thing about starry B-town parties. On one hand we look forward to the apparels that our favourite celebrities don, and on the other hand we want to see who comes with whom, making their relationship evident in front of the public eye. And in the whirlwind of who’s dating whom in Bollywood, comes a very interesting triangle- Arbaaz Khan, Malaika Arora and Arjun Kapoor. (Do Read: Aashka Goradia And Brent Goble's First Wedding Anniversary, She Calls It 'Best Year Of Her Life')

While we will get to an explanation of the intro, let us give you a recap of the memorable December 01, 2018 night. On that day, the world witnessed two beautiful souls, doing total justice to the spicy colours, red and black at their Mumbai reception. Yes, DeepVeer it is people! Take a look at one of their pictures here:

Apart from the ‘centre of attraction’ that day, came in a flood of celebrities under one roof! With exes bumping into each other, ‘probable’ sautans carrying a wide smile, alleged daters making their love official, DeepVeer’s reception was a hub for latest Bollywood gossip and therein comes the sassy Malaika Arora (oops, not Khan anymore!). People went in for a momentary ‘wow’ when Malaika’s former hubby, Arbaaz Khan walked in with his girlfriend, Giorgia Andriani.

And then came Arjun Kapoor, looking super-cool in his Panipat look. A few minutes later, so as to not make it look evident, Malaika entered, once again twinning with her ‘bae’ in a blue gown designed by Amit Aggarwal. Them twinning is not all guys! As per a SpotboyE report, Malaika’s current and former, Arjun and Arbaaz had an awkward encounter. Arbaaz was reportedly busy chatting away with Giorgia and Sophie Chaudry. And at that very while, Malaika entered with her current flame, Arjun!

Next is what? If rumours are to be believed, Arjun made a straight face and walked past Arbaaz, thus totally ignoring him. Malaika, on the other hand, stopped by Arbaaz for a while, chatted with them and moved on towards her current beau, Arjun! So filmy, right? (Do Checkout! Bharti Singh And Haarsh Limbachiyaa Celebrate Their First Anniversary Together, Share Unseen Video)

Reports also had it that Arjun and Malaika have purchased a plush apartment in Mumbai’s Lokhandwala. A source close to the couple was quoted as saying, “Arjun and Malaika have together purchased a flat in a plush society near Lokhandwala Complex. It is their joint investment together. Whether they plan to live in or no is entirely up to them. But they are surely getting a space for themselves. Currently, the interiors of the house are being done and both Malaika and Arjun are looking into the details.”

The couple have been publicly spotted going on dates together. A recent media report suggested, “Malaika is no longer keen to hide her proximity to Arjun. When she was with Arbaaz, the Khan family, especially Salman, made their disapproval very clear. But now that she has broken away from Arbaaz, she sees no reason to be coy about her closeness to Arjun. Besides, Arbaaz is also seeing someone else now.”

Answering about her current relationship status, Malaika had shared, “I never answer personal questions. Not that I shy away from answering or whatever. I just don’t feel comfortable talking about my personal life. And whatever my life has been, everyone is aware of it. I don’t need to be talking about it. I am just enjoying my life - it’s beautiful and precious.” (Don't Miss! Priyanka Chopra And Nick Jonas' First Look After Wedding, Newly Bride Glows In Sindoor And Chooda)

On Halloween this year (2018), Arjun Kapoor shared a super-cool edited picture of himself created by a fan page which the Namaste England star captioned it as, “Happy Halloween!!! Just an excuse to post this really cool edit made by @arjunkusafc love it !!! #halloween.” While we bet that you can’t help but gape in amazement at the picture, Arjun’s ladylove, Malaika’s ‘fiery hot’ comment will leave you flabbergasted! Checkout the same below:

A Voot chat show named Feet Up with the Stars has celebrity fashion designer, Anaita Shroff Adajania as the host. One of the episodes in the show has Malaika Arora as the guest where, after a long time, the Munni Badnaam star spoke about her life after divorce. Malaika revealed, “I'm calmer, more at ease and at peace with my surroundings. I think I was just all over the place. Now, I feel far more calm."

Well, that suffices all! What do you have to say about Arbaaz and Arjun’s awkward encounter? Drop your thoughts in the comments section below.