Mahhi Vij blessed her fans with adorable father-daughter videos, where we can see Tara feeding her daddy, Jay Bhanushali. Check out the video inside!

A daughter is every father’s princess and his ultimate love. A smile or a hug from her can make any father’s worries go away. The moment a father holds his little girl in his arms, his life changes completely and a new person is born inside him. A person, who will do anything for her wellbeing and would give her even his share of food. That is how important his little girl becomes for him. And the moment, his daughter grows and starts to care about him, there is no feeling more beautiful than this. Jay Bhanushali is one lucky father, whose little girl, Tara is growing up fast and is taking care of him. (Also Read: Neetu Kapoor Remembers 'Nanad' Ritu Nanda On Her First Death Anniversary, Shares A Throwback Picture)

After seven years of their married life, Jay and Mahhi had adopted their caretakers’ kids, Khushi and Rajveer, experiencing the feeling of parenthood for the very first time. Later, on August 3, 2019, the couple was blessed with an angel, whom they have named Tara and her cuteness always makes us go 'aww'. The baby girl has become sabki aankho ka tara and she already enjoys a huge fan following on social media. While everyone showers endless love on her, she has showered love on her papa, Jay. Taking to her IG stories, Mahhi shared an endearing father-daughter moment. In the videos, we can see Tara and Jay sitting in the lobby and having dinner at their home. While initially, it looked like Tara is fascinated by the sky, stars and moon, later, we can see her feeding Jay from her spoon and papa, Jay can be seen enjoying it, saying, ‘wow’. In another story, we can see Jay turning into a human slide for Tara as he can be seen holding a bar, with Tara locked between his legs and swinging. Take a look:

On January 7, 2020, we had seen another father-daughter video on Mahhi Vij’s IG stories. Taking to her IG handle, Mahhi had shared a hilarious father-daughter conversation. In the video, we could see Tara screaming papa and Jay’s voice could be heard from distant, saying ‘arey gussa mat karo’. To this, Tara could be seen screaming louder. This had made us wonder what Jay must have done to make Tara so angry that she had ended up screaming at him. (Don't Miss: Jasmin Bhasin Screams 'I Love Aly' To The Paps After Confessing Her Feelings For Aly Goni [Video])

With a child, comes a little bit of tantrum and zid. On September 22, 2020, Jay Bhanushali had shared a video on his IG stories with his daughter, Tara, reacting to her zid. While Jay was recording a cutesy video with Tara, and she had started sucking her fingers, to which, Jay had asked her to remove her fingers, and then had started her zid. When Jay had said, ‘Zid nahi chalegi’, Tara had started crying.

In a conversation with Pinkvilla, Jay had shared how his and Mahhi's life as a couple had changed after the birth of their daughter, Tara. Sharing how his relationship with his wife, Mahhi had transformed from girlfriend-boyfriend after Tara’s birth, he had said, “Definitely, Tara has brought a huge difference in me when it comes to loving your family. I am more attached to my family now. Before Tara, Mahi and I would take our relationship like boyfriend and girlfriend, but now after Tara being there, there are more responsibilities and we are happy with it. She has changed me as a man and a human being. I am more concerned about everything now. I am more responsible about my spending also because as a father you always want to save and do better for the daughter." (Recommended Read: Gauahar Khan Twins With Her 'Saasu Maa', Farzana In The Shades Of Green, Pens Birthday Wish For Her) Isn’t the moment shared between Tara and Jay too adorable? 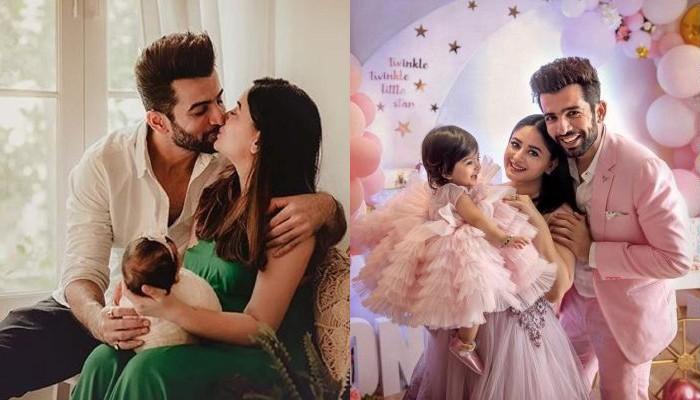 Tagged as the power couples of the television world, Jay Bhanushali and Mahhi Vij's love for each other knows no bounds. From pulling each other's leg to cracking jokes on one another, this couple is an epitome of pure love. They had met at a common friend's house party, little did