We have seen Madhuri Dixit’s love for dance and in her latest post, we can see her elder son, Arin Nene’s interest in learning Kathak from his talented mother. Scroll to see the video. 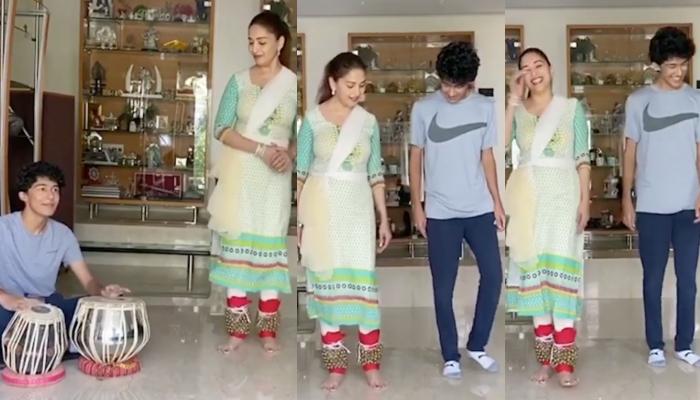 Be it her Dhak Dhak in Beta, Ek Do Teen in Tezaab, Didi Tera Dewar in Hum Aapke Hain Koun..!, Choli Ke Peeche in Khalnayak, The Dance Of Envy in Dil To Pagal Hai, Kay Sera Sera in Pukar or Kaahe Chede Chede Mohe in Devdas, there wasn’t, isn’t and won’t be an actress in the Hindi film industry to match up to Madhuri Dixit’s beauty and the elegance with which she performs. Often referred to as the Madhubala of her time, Madhuri had swooned us with her versatility, exceptional acting and flawless dance. (Also Read: Amitabh Bachchan's Savage Reply To A Netizen Asking About Daughter-In-Law, Aishwarya Rai Bachchan)

The reigning queen of Bollywood, Madhuri Dixit had exchanged wedding vows with a cardiovascular surgeon based out of Los Angeles, California, Dr Sriram Nene in 1999. Unknown to his then to-be wife’s popularity in India, it was only after their engagement that Sriram had watched a few of her films. Madhuri had left Mumbai and shifted to the US after her marriage and created her ‘happily ever after’ with husband and two kids, Arin Nene and Ryan Nene, away from the media glare. After a decade, Madhuri and Dr Nene shifted to India with Arin and Ryan. 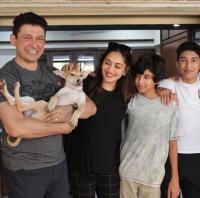 We have seen Madhuri Dixit’s love for dance and in her latest post, we can see her elder son, Arin Nene’s interest in learning Kathak from his talented mother. Sharing the video, where Arin can be seen playing tabla as his mom Madhuri taps her feet with ghungroos on, Madhuri wrote, “Quarantine is making all of us do things that we’ve always wanted to. Watch till the end to find out what I have always wanted to do #WhenArinDancedWithMadhuri.” In the end, we can see Arin leaving his tabla and learning a few Kathak steps from Madhuri.

On March 17, 2020, Arin Nene had turned 17 and had posted a beautiful picture with her teenage son. In a heartfelt birthday wish for Arin, Madhuri had written, “Know that when I scold you, it’s only because I care, and when I hug you, it’s always cause I love you. Wherever life takes you, whatever the goals that you seek for, I will always be so proud of you! I wish for only the best in life for you, and may your birthday be filled with lots of love & laughter. Happy Birthday Arin.” (Also Read: Sameera Reddy Revealed What Is Keeping Her Busy During Lockdown In Her Latest 'Messy Mama' Post)

Since the nationwide lockdown has been imposed, everyone is finding out different ways to pass their time in self-isolation. Madhuri Dixit is ‘making the most’ of this phase with her family and posting a picture with hubby, Sriram Nene and son, Arin Nene, Madhuri had written, “Making the most of this quarantine by spending some quality time with my family... Everyone, please take the necessary precautions. Take care. Stay safe. Love, MD.” Madhuri is also making sure to keep up with her rehearsals and sharing a glimpse of her ‘riyaz over call’, she had written, “#RiyazOverCall Let's not waste this precious time but utilise it to its full capacity... nothing can stop you from doing what you really love.”

In a 2019 interview with the Hindustan Times, Madhuri Dixit had spoken about how her family deals with the paparazzi. Revealing how they manage to keep a low profile, Madhuri had stated, "When I returned to India with my family, the paparazzi culture had grown so much that my kids and I were chased everywhere we would go and photographers would keep a close watch to our movements. They have become used to it, so it doesn't really affects us. They just keep themselves busy in their school work and activities. We are like any other normal family and thus, have managed to keep a low profile with my kids in the media. Fans also understand that for me some things are private and they will always be that way and they respect that. I don't have to put every waking day of my life on social media. But for me, it is keeping in touch with them, letting them know what's happening.” 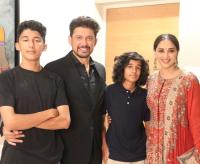 On Children’s Day 2019, Madhuri Dixit had posted a picture with her sons, Arin Nene and Ryan Nene. She had captioned it as “The zeal for life that kids have is inspiring. The more time I spend with them, I realize how there's a child hidden inside all of us. Let's celebrate the spirit of childhood and empower them as they are our future. #HappyChildrensDay.” (Also Read: Saif Ali Khan Revealed That Kareena Kapoor Restrained Him From Posting An Adorable Video Of Taimur)

Isn’t #WhenArinDancedWithMadhuri, a moment too sweet to miss? A mother deserves every happiness in this world. Her love for her kids is undying and we often take it for granted. Rather than appreciating her presence, we happen to ignore the time and love she showers upon us, and thus it gets even more important to celebrate her life. Madhuri