Maanayata Dutt shares beautiful pictures with her adorable twins, Iqra and Shahraan, clad in ethnic wear, on the occasion of Eid. Scroll down to check it out!

The world is at a halt and has been like that since almost the beginning of the year. Everything is shut down, and we're all locked in our homes. It's almost as if our worst nightmare has come to life in the form of this global pandemic. But as legend, Raj Kapoor had once said, 'The show must go on' and so does life! Life doesn't wait or stop, and just because we're dealing with the tragedy of the millennium, we're not supposed to sacrifice happiness on the face of adversity that comes in our way every now and then, right? (Recommended Read: Aishwarya Rai Bachchan Pens An Adorable Note For Her Mother, Brindya Rai On Her Birthday)

The whole world is celebrating Eid today, and Bollywood celebs are resorting to their social media handles to give a glimpse of their Eid celebrations to their fans. Scroll down to know about the Eid festivities going on in Sanjay Dutt's Dubai house as his wife, Maanayata posted adorable pictures with her little twins! 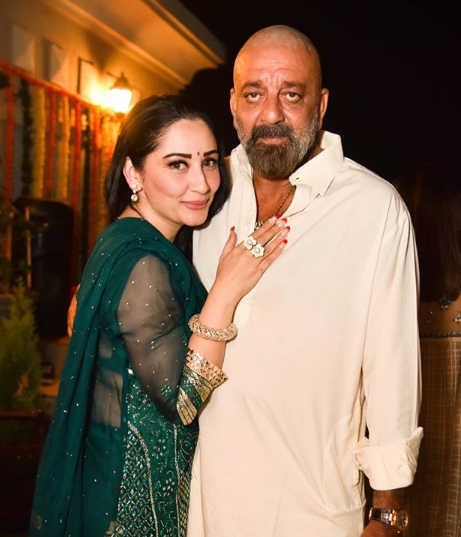 Maanayata Dutt took to her Instagram handle on May 25, 2020, to share the happiness and festivities of Eid with her Insta fam along with her little munchkins, Iqra and Shahraan. Maanayata looked gorgeous in a pink suit while the little goofballs stole the show in ethnic wear. The trio made for a happy-go-lucky family picture. Maanayata wrote a heartfelt note wishing everyone Eid Mubarak in the caption which can be read as "Eid Mubarak to everyone...May the doors of happiness and prosperity be open upon you #eidulfitr2020 #love #grace #positivity #dutts #beautifullife #thankyougod." Maanayata also shared pictures of their Eid festivities in her Instagram stories. Take a look at the pictures here: 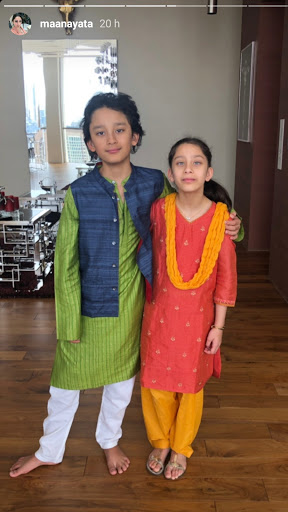 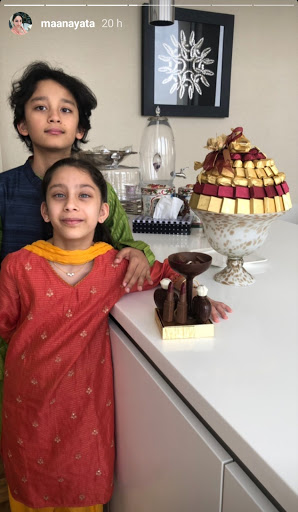 Maanayata Dutt is a doting mother, who shares a great camaraderie not only with her children, Iqra and Shahraan but also with her step-daughter, Trishala. Maanayata and Trishala share a warm bond and get along very well with each other. Their social media banter speaks of the volumes of love and affection they have for each other. Some time ago, Trishala had posted a gorgeous picture of herself on her Instagram handle. She was dolled up in a white sweater and had accessorised it with a long silver chain. She had completed her look with a Rapunzel style braid. Along with it, she had put a heart emoji in the caption. Maanayata was the first one to comment on her picture as she had written, "Lovely", with a heart emoji. (You May Also Like: Farah Khan Wishes Her 'Ok-Husband', Shirish Kunder On His Birthday With A Picture From 15-Years-Ago) Some time ago, Maanayata Dutt had opened up about her relations with her step-daughter, Trishala in a media interaction and had said, "That is my journey which I have decided from Manya Aunty to mother. 12 years ago I was a recognition aunt for Trishala, but today I am a mother. I am proud of her. She always messages me. We are constantly in touch. I am very happy with my bonding." In an interview with the Hindustan Times, Trishala had talked about the challenges she faced growing up without parents and had said, "I faced a lot of challenges growing up and till today I face new challenges every day but I always find a way to fix them. Unlike other starkids I don't have the luxury to have mommy and daddy help with things. I don't have the luxury of a father to "make a phonecall" or "pull a favour" for me as the others do. It's hard with no help and you have to do everything on your own. Then I look at someone like Shah Rukh Khan who did everything on his own with no parents in the industry, no friends, no connections, no nothing. He had a drive for success and he had talent. If he can do it, so can I. Anyone can do anything if they put their mind to it." (Also Read: Shah Rukh Khan Reveals Son, Aryan Khan Once Hit A Kid Because She Called His Father 'Fat And Ugly') Here's wishing a happy and prosperous Eid to everyone!