As the rumour forecasts that the wedding bells are going to ring soon for Bollywood couple, Vicky Kaushal and Katrina Kaif, here's a timeline of how they fell in love.

The reports of Bollywood actors, Vicky Kaushal and Katrina Kaif's wedding are doing rounds in the media for quite some time now. Though the duo has not confirmed anything about their upcoming wedding, a few of their industry friends and close sources have spilt the beans, time and again. As per reports, Bollywoood's most mysterious couple are reported to have a grand wedding on December 9, 2021, at Six Senses Fort Barwara, Rajasthan.

Vicky Kaushal and Katrina Kaif's wedding ceremony will be preceded by a sangeet ceremony on December 7, 2021, and a mehendi function will be held on December 8, 2021. And now, themes of their pre-wedding ceremonies are out too. According to multiple media reports, the theme of sangeet will be bling, and the theme of mehendi ceremony will be all-decked up in the colours of beige, ivory, white, and gold. However, not many know how their love story had started. So without much delay, let's delve deep into how Vicky and Katrina found their soulmate in each other.

In 2019, when Katrina Kaif had visited Koffee With Karan, filmmaker, Karan Johar had asked her the name of any actor with whom she would love to pair in her next movie. Without taking much time, Katrina had taken Vicky's name. Later on, when Vicky had graced the show with Ayushmann Khurrana, Karan had told the former about the episode in which Katrina had spoken highly of him. Hearing the same, Vicky had firstly asked, ''Really?", and then acted like fainting. After Karan's revelation, Vicky Kaushal was on cloud nine. Therefore, he did not lose the opportunity on an award show, where he and Katrina were present on the stage to announce the winner's name. Sparks had flown when the Masaan actor had jokingly asked Katrina the reason behind not finding a good guy like him and getting married to him. He had said:

“Why don’t you find a nice boy like Vicky Kaushal and get married to him? The season of weddings is going on, so I thought, you might want to do the same. As a result, I thought I'd ask you."

As soon as Vicky had asked her the question, Katrina Kaif was baffled at the beginning and Salman Khan's song, Mujhse Shaadi Karogi had started playing in the background. However, later on, Katrina had blushed and said that she did not have the guts to marry somebody like him. In her words:

Vicky Kaushal and Katrina Kaif had together appeared on the talk show, Tapecast and though it was an interview, it did not have any host. Instead, the duo had to answer a few questions played on a tape recorder. During the interaction, when the actor had asked the gorgeousness that if she had ever thought that their first conversation would be recorded, the actress had replied in negative. However, she had quickly added that the next time she had got to know somebody on record, for the first time, she would give it a thought.

In 2020, when Vicky Kaushal had graced The Kapil Sharma Show, the host, Kapil Sharma had asked him a question about a rumour that was afloat about the former. Kapil had asked him that if this rumour is true that Vicky did not mind a cat crossing his path since he likes Kat. Kapil had asked him, "Yeh afwah hai ki aajkal billi raasta kaat jaye toh aap bura nahi maantey kyuki aapko Kat pasand hai." Though the actor had not said anything, he had smiled. However, the way he was blushing was more than enough.

Suggested Read: When Katrina Kaif Was Impressed By Her Alleged 'Saasu Maa', Veena Kaushal, Called Her A 'Wise Woman' 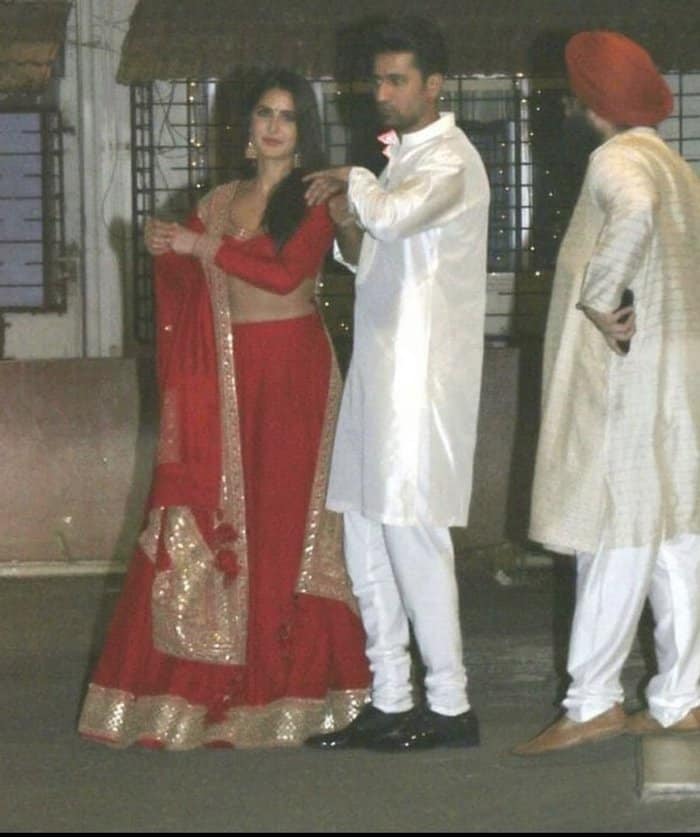 In 2019, Vicky Kaushal and Katrina Kaif had sparked the rumours of their relationship, when they were spotted together at Bollywood actress, Sonam Kapoor's house to attend the Diwali bash. For the evening, Katrina had looked stunning in a red Sabyasachi lehenga and Vicky had worn a white kurta-pyjama. For the unversed, this was the first time that the duo was spotted together without any professional work purpose.

The much-in-love couple, Vicky Kaushal and Katrina had added fuel to their dating rumours when they were spotted in Mumbai for the screening of another alleged B-Town couple, Sidharth Malhotra and Kiara Advani's film, Shershaah. Not just that, amid all the reports of their relationship and wedding in the media, Vicky was snapped visiting Katrina quite a number of times at her residence in Mumbai. Though Vicky Kaushal and Katrina Kaif prefer to keep their relationship under the wraps, some of their industry friends have time and again, confirmed the same. On The Kapil Sharma Show, Karan Johar had once taken a jibe at the duo and had indirectly confirmed Katrina and Vicky's relationship. When the team of Sooryavanshi had graced the show to promote the film, Kapil had asked Karan about the rumours of him getting scared on the sets of Bhoot Part One: The Haunted Ship and clinging on to Vicky. On Kapil's revelation, the director had immediately apologised to Katrina. When Akshay was confused and had asked Karan the reason behind the apology, Karan had jokingly said: A few months back, in a chat show with Zoom, Harsh Varrdhan Kapoor had confirmed Vicky and Katrina's relationship. When Harsh Varrdhan was asked which industry relationship rumour he had believed to be true or a PR move, he had said:

"Vicky and Katrina are together, that's true. Am I going to get in trouble for it?" In an interview with RJ Siddharth Kanan, Ayushmann Khurrana was asked to describe the kind of date he would take Katrina Kaif on. However, the actor was quick to reply and had taken a jibe and had funnily taken Vicky Kaushal's name in his answer. Talking about the same, he had said:

“Listen, I can't dance like her. I don't know man, Katrina Kaif, but ya, Vicky (Kaushal) is a Punjabi na so I'm sure there's some Punjabi connect for sure."

Well, looking at the timeline of Katrina Kaif and Vicky Kaushal's love life, it is for sure that no one but Karan Johar needs to be thanked for it. He had literally played the role of a Cupid for them. And, we are happy that sparks had flown between them and they had realised their feelings for each other.