Deepika Padukone is not just Ranveer Singh's ideal wife, but also the dream of Kartik Aaryan as he wants to marry a girl just like her. Check out to know why!

The pandemic has put a pause on our normal life. First, the lockdown has made us locked inside our homes and now, we have another struggle of adjusting to the masked faces and sanitizing our hands after every 5 minutes. In the middle of it, technology is playing an important role for us to stay connected. And Bollywood celebrities are making sure to entertain their fans with their Instagram stories. One such exceptional actor, whose Instagram game is on point, is none other than Kartik Aaryan. (Recommend Read: Hardik Pandya Mocking Natasha Stankovic As She Calls Him 'Jigar Ka Tukda' Is Why They're The Cutest)

The hottest hunk of B-town, Kartik Aaryan is making our hearts go ahmmm with his stunning looks and his videos with his sassy mom. Recently, during a live Instagram chat, the actor revealed that he wants to marry a girl like Deepika Padukone and the reason is just perfect. And we are sure, Ranveer Singh will also feel proud after hearing it. 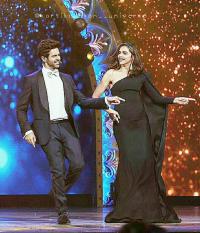 In an interview with Bollywood Hungama, the host of the show asked Kartik a fan's question, "What kind of girl he wants to marry?" To which, the actor shared, "Someone like Deepika Padukone, the way she is. One who shows off her husband proudly." In the same interview, another fan asked the actor about his link-up rumours with his co-star, Janhvi Kapoor. To which, Kartik shared, "Agar Janhvi Kapoor jaisi talented ladki meri T-shirt pehnegi toh main toh bohot flattered rahoonga."

For those who don't know, Kartik is extremely close to his family, in an interview with the DNA, he had talked about his dream house that he has built-in Mumbai. He had stated, "I had a dream that we would all live together once again. Now, after almost seven-eight years of staying here alone, I asked them to join me. In a way, this is my dream house because my parents and sister are here with me." Kartik had also shared that he has always been a mumma’s boy. He has been sharing everything with her since childhood and he still does.  (Also Read: Suhana Khan And Gauri Khan Spotted Enjoying First Showers Of The Season In Their Plush Balcony)

Last month, when Kartik had come up with an idea of interviewing the COVID-19 frontline workers and salute their journey in his Youtube show, Koki Puchega, we had gotten a glimpse of his sassy mom. On May 4, 2020, Kartik had taken to his Instagram handle and had shared a hilarious video, wherein his mother had asked him a funny question. In the video, we could see Kartik shooting for his show, while his mother had called him and he had replied that he is taking an interview. To which, his mother had asked him, "Le raha hai ki de raha hai". Kartik had captioned the hilarious video as "Maa ka Jawaab Nahi".  (Don't Miss: Namrata Had Shared Same Cuddled-Up Picture With Mahesh As Samantha And Naga On The Same Day)

Well, we love Kartik and his honesty!