Kareena Kapoor Khan Shares A Glimpse Of Her Bedtime Reading, It Is Every Mommy Ever

Kareena Kapoor Khan took to her IG handle and shared a glimpse of her favourite bedtime reading. Her parenting won our hearts once again!

Kareena Kapoor Khan is a mother to two kids, Taimur Ali Khan and Jehangir Ali Khan. For the unversed, Kareena Kapoor is married to the Pataudi prince, Saif Ali Khan, and both of them has been enjoying every moment of parenthood ever since Taimur Ali Khan was born. The couple had completed their family after welcoming Jeh into their lives. And much like his elder brother, Taimur, Jeh has become an internet sensation as well.

Being a supermom, she always tries to give her children an educational and insightful upbringing. Every now and then, Kareena Kapoor takes to her social media handle and shares glimpses from her daily life, be it her yoga mornings or quality time with kids or attending parties, she tries to keep her fans updated. On February 7, 2022, Kareena Kapoor Khan took to her IG handle and shared a snippet from her bedtime reading. In the picture, we can get a glimpse of a page from a fable that gives an insightful quote, "'Is your glass half empty or half full?' Asked the mole. 'I think I'm grateful to have a glass', said the boy.'" Atop it, Kareena wrote: A few days back, Kareena Kapoor Khan had dropped a picture with her boys, Saif Ali Khan and Taimur Ali Khan, and baby Tim’s pose could give any model a serious run for the money. On her IG stories, Kareena had shared a twinning-in-black picture with Saif and Taimur, which had looked like from her BFF, Amrita Arora's birthday bash. Sharing the pictures, Kareena had added a ‘My boys’ sticker atop it. To bid adieu to the year 2021, Kareena Kapoor Khan had taken to her IG handle and had delighted us with an adorable photo of her younger son, Jehangir Ali Khan. In the picture, we could see the little munchkin dressed in a baby pink coloured outfit, playing with his toy and smiling. However, what had caught our attention were the two teeth of baby Jeh! Along with it, Kareena had wished her fans a blessed New Year and had written:

In an episode of the Raising Parents with Mansi Zaveri podcast, Kareena Kapoor had talked about how she balances her time between her two kids, Taimur and Jehangir. She had said:

"I think that the fact is that I am a very calm person, I am very composed. I divide my time well. Like I know Taimur needs me at this point in time. You know I am lucky that he now wakes up later than Jeh's so I know I have to be with Jeh for that hour while he has his breakfast and then once Jeh's breakfast is done I know Taimur's time is you know coming in. So I just balance it out. The idea is to not have too much pressure on like doing things. The idea is to involve children to take part in your daily life. It's not like we have to do this and we have to do that. We are not those kind of parents." 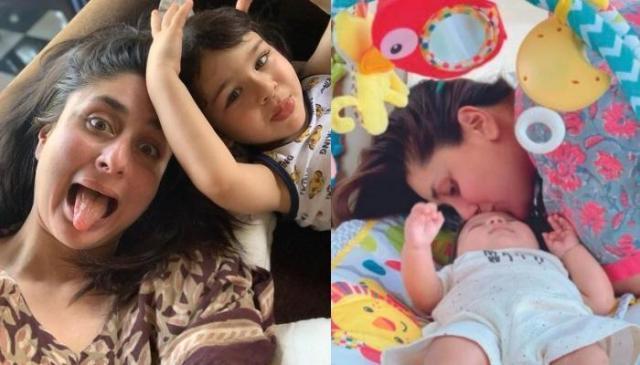 On the work front, Kareena Kapoor will be seen in her upcoming film, Laal Singh Chaddha with Aamir Khan. Bollywood has recently witnessed the union of two royal families, the Kapoors and the Bhatts. With the dreamy pictures coming in from Alia Bhatt and Ranbir Kapoor's wedding, fans are going gaga over the same. One such fashionista is our Bebo, who had made heads turn with her oh-so-glamorous look