The second time mommy-to-be, Kareena Kapoor Khan revisited the memory lane and is missing the time when she had met her hubby, Saif Ali Khan! Her waistline blew us away!

Kareena Kapoor Khan and Saif Ali Khan’s chemistry doesn’t need any description. The two ooze out the vibes of compassion, sensibility and endless love. Their practical approach towards relationship and life is probably the reason that has made their relationship an ideal one. Saif and Kareena had worked together in the movie, Tashan in 2007 and had fallen in love. The couple had tied the knot on October 16, 2012, and on December 20, 2016, the two were blessed with a blue-eyed prince, Taimur Ali Khan. The duo is ready to welcome their second child in the month of February 2021 and the second time mommy-to-be is revisiting the memory lane and is missing the time when she had met her hubby! (Also Read: 'Kullfi Kumarr Bajewala' Fame, Mohit Malik Poses With Pregnant Wife, Aditi Shirwaikar In The Pool)

Kareena Kapoor Khan is a social butterfly and ever since she has made her entry in the world of social media, she has become a pro. From sharing snippets of her life to sharing unseen pictures, she has glued us to her Ig handle. On December 11, 2020, we had seen an unseen picture of Kareena with her ‘Saifu’ miya. Kareena had taken to her IG handle and had shared a throwback picture with her soulmate, Saif from one of the events. In the picture, Kareena had looked gorgeous in a beige-coloured saree paired with a red blouse and Saif had looked dapper in a black suit. The lovely couple was seen holding hands and it was pure couple goals. Kareena had captioned the picture as “My saif-haven” followed by heart emoticons. Now, Kareena has shared another unseen picture with her hubby, Saif from the year the two had met. 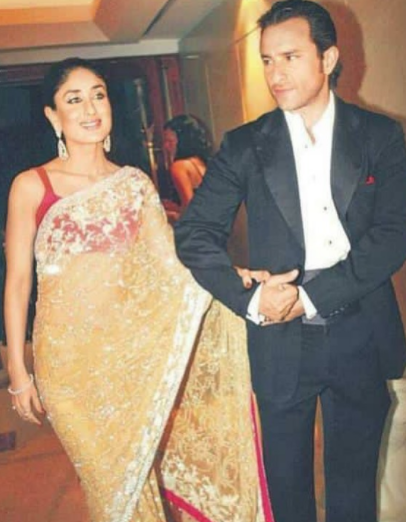 Yes, taking to her IG handle, Kareena Kapoor Khan shared a throwback picture with her husband, Saif Ali Khan from the year 2007. In the picture, Saif can be seen wearing a shades of blue striped shirt, flaunting his look from the film, Tashan, whereas, Kareena can be seen giving Saif a side hug in a beige pullover with a red and white print. Kareena was quite famous for her zero waistline during the shoot of her film, Tashan as she was the one to bring this concept in India. Sharing the picture from Circa 2007, Kareena too couldn’t stop from looking at her waistline. She captioned her picture as “Throwing it way back... Circa '07, Jaisalmer Ooooooh that waistline... I’m talking about mine, not saifus #TakeMeBack.” Well, the couple has been together for more than a decade now, but do you know Kareena too gets jealous when a pretty lady approaches Saif? In a throwback interview during the promotions of Kurbaan, Saif and Kareena were asked ‘Who is more possessive in the two of you?’ To which, first Kareena had given a funny look, indicating towards Saif as the possessive one. However, it was Saif, who had gone on to say that he feels they both are possessive, to which Kareena had added how she is equally possessive as she gets very jealous if a nice pretty girl talks to Saif. Well, as we said being jealous and possessive is also a part of love. (Recommended Read: Alia Bhatt Reveals Who Her Favourite Person Is And It Is Not Her Boyfriend, Ranbir Kapoor)

On October 16, 2020, Kareena and Saif had completed eight years of marital bliss. To mark their eighth anniversary, Kareena Kapoor Khan had posted a cosy romantic picture with her hubby, Saif Ali Khan. Revealing the key to their happy married life, Kareena had written in her caption how their ‘happily ever after’ had started. Kareena had captioned her anniversary post as “Once upon a time there was a girl named Beboo and a boy named Saifu. They both loved sphagetti and wine... and lived happily ever after. Now you guys know the key to a happy marriage. On that note, happy anniversary SAKP... here’s to eternity and beyond.” (Don't Miss: Virat Kohli And Anushka Sharma Increase Security At The Hospital After The Birth Of Their Daughter)

Were you also a fan of Kareena Kapoor Khan’s 'zero waistline'? Saif Ali Khan and Kareena Kapoor’s third film together, Tashan had proved to be a new beginning for them, both on the personal as well as professional grounds. The power couple of B-town, Saif and Kareena had tied the knot in a registered marriage in 2012, proving that inter-faith, inter-religion, inter-background and