Soha Ali Khan took to Instagram and shared a picture as she chilled with Kareena Kapoor Khan and Taimur Ali Khan. However, there was another celeb mommy who had accompanied them.

Life’s a holiday for the Khan family these days (or better to say, it’s always been!). Kareena Kapoor Khan and Saif Ali Khan are busy enjoying their work-cum-leisure trip in the city with the ‘Big Ben’ (London, silly!) and an active Instagrammer, Soha Ali Khan suffices to all our needs whenever it comes to catching a glimpse of the activities of the royal Pataudi clan in London. It has been two months since Saif, Kareena, along with little Tim Tim are away from India, but hardly have they been away from their family. (Do Read: Sameera Reddy Posts A Strong And Inspirational Message On Breastfeeding And She Is Absolutely Right)

After Karisma Kapoor with her kids, Kiaan and Samaira and mommy, Babita paid Saif Ali Khan, Kareena Kapoor Khan and Taimur Ali Khan a visit in London, the youngest half of the Pataudi lineage made their way towards the city. Soha Ali Khan, hubby, Kunal Kemmu and their adorable daughter, Inaaya Naumi Kemmu are currently holidaying in London along with Saif, Kareena and Taimur, and every picture that she posts become a headline in no time! Do you remember an all-ecstatic Inaaya when she saw her brother Taimur after a long time? Sharing the picture, this is what Soha had written, “Reunited!! #timandinni #london.” 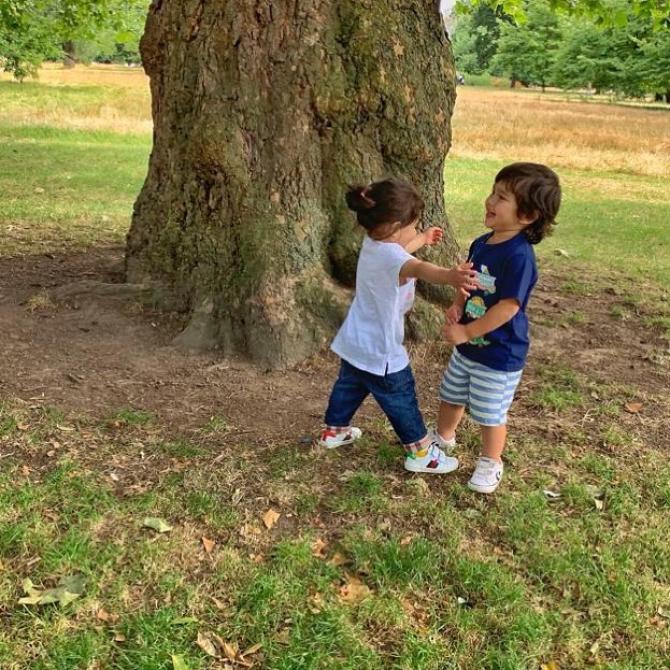 And once again, Soha Ali Khan took to Instagram and shared a picture as she chilled with her bhabhi, Kareena Kapoor Khan and bhanja, Taimur Ali Khan. However, we were also elated to see Ranvvijay Singha’s wife, Prianka Singha and her daughter, Kainaat Singh also pose along with the ‘Khans’ for the camera. Well, to give you some more details, a while back, Soha had shared a picture of Taimur and Inaaya from today’s activity, which was hanging out at a farm. While we will share the pictures from the same below, another group fam-jam picture had Kareena and Taimur, Soha and Inaaya, Prianka and Kainaat happily posing for the camera! Sharing the image, Soha wrote, “A day at the farm #willowsactivityfarm #timandinni #timandinniandkai @priankasingha #londondiaries.” Prianka too posted a couple of pictures from their day out and wrote, "Old MacDonald had a farm ... but we went to Willows instead. One of the best day trips with the kids so far (a couple of hashtags) Satnamwaheguru Mashallah." 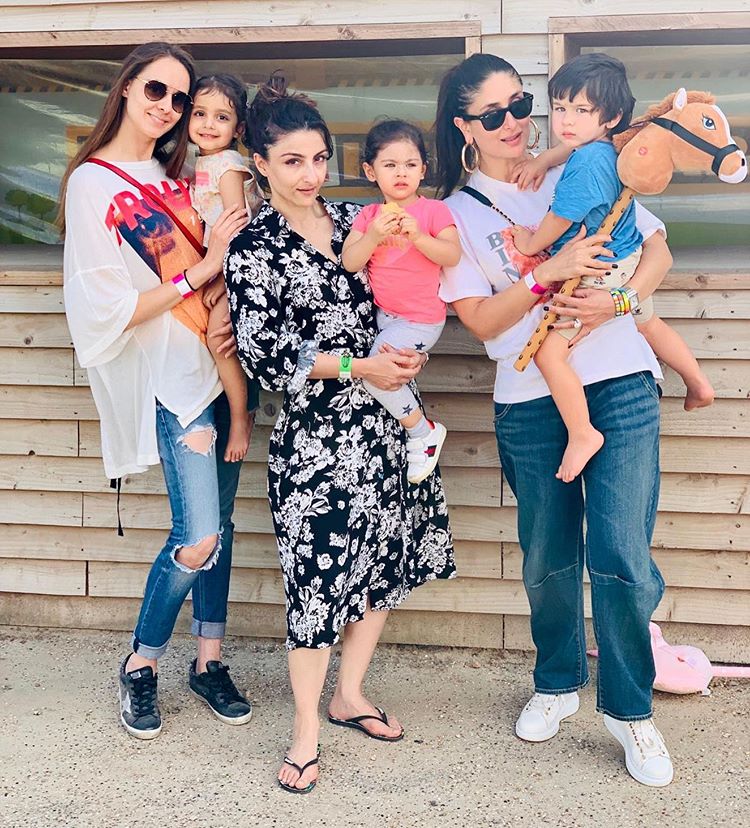 And now, for their farm pictures, Soha Ali Khan had again turned photographer as she happily clicked the little’s ones, Taimur Ali Khan and Inaaya Naumi Kemmu, having a gala time as they peeked at an animal with deep curiosity. The pictures that she posted a while back were captioned as “Hanging at the farm with #timandinni #willowsactivityfarm #londondiaries.” As Taimur sported a blue t-shirt with off-while shorts, Inaaya had worn a pink t-shirt with star-printed pants. (Must Read: Saif Ali Khan Reveals If His Son Ibrahim Is Going To Enter Bollywood As A Hero, Just Like Him) 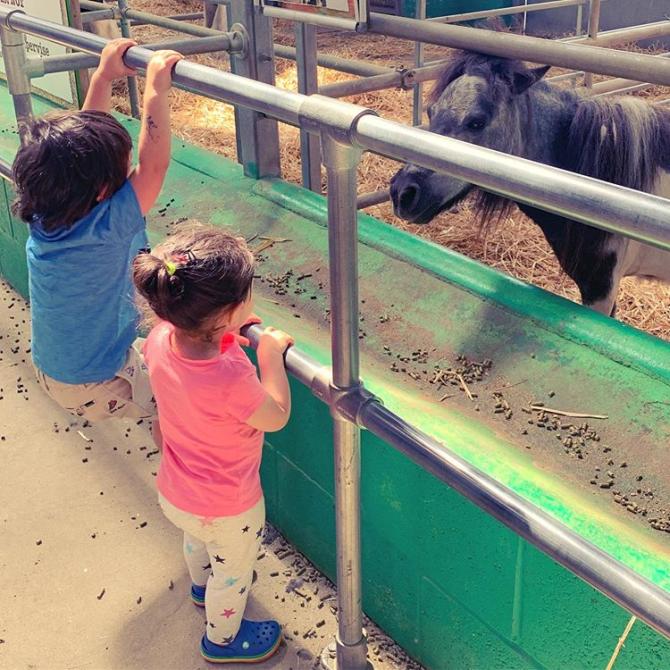 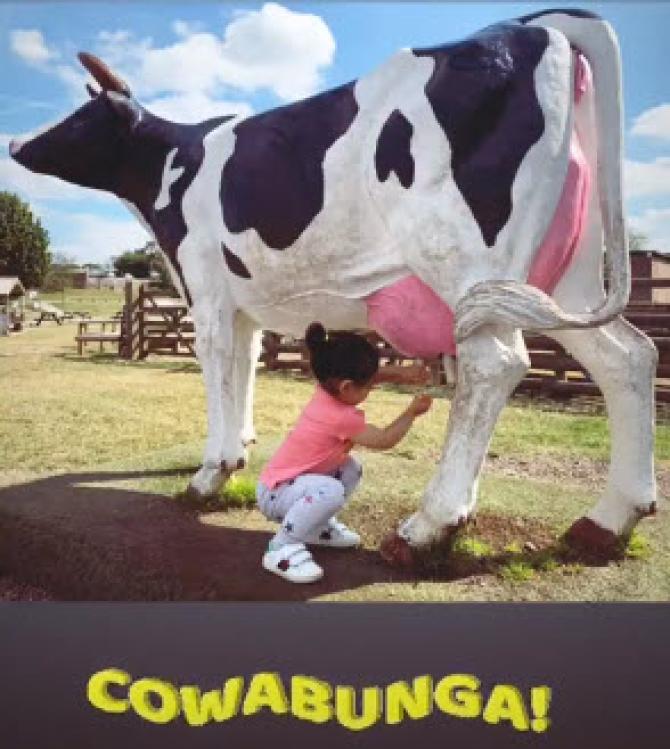 The Singha family and the Khan family share a close camaraderie. Remember that adorable video posted by Soha Ali Khan on September 23, 2018, when Kainaat Singha had recognised her friend, Inaaya's 'mama' from the cover of her book, The Perils Of Being Moderately Famous? This is what she had written, "Inaaya mama!!” A book that talks about the perils of being known by association and in relation to other more famous family members - and here is baby @singhakainaatrecognising me, the author, as “inaaya mama”!! And I love it !! The best identity I have #theperilsofbeingmoderatelyfamous @priankasingha @rannvijaysingha."

If you are still wondering about Prianka Singha and her daughter, Kainaat Singha in the picture, let us give you some examples of Taimur Ali Khan and Kainaat Singha’s playdate in the past. Prianka’s hometown is London and she is often spotted chilling with her family there. And it was last year’s summer when Taimur and Kainaat had gone on to become great play buddies as they had gone to the zoo together along with their mommies, had played on a see-saw together and had also taken a splash in the pool. Here are a couple of pictures and videos from Tim and Kaiyu’s playdates: 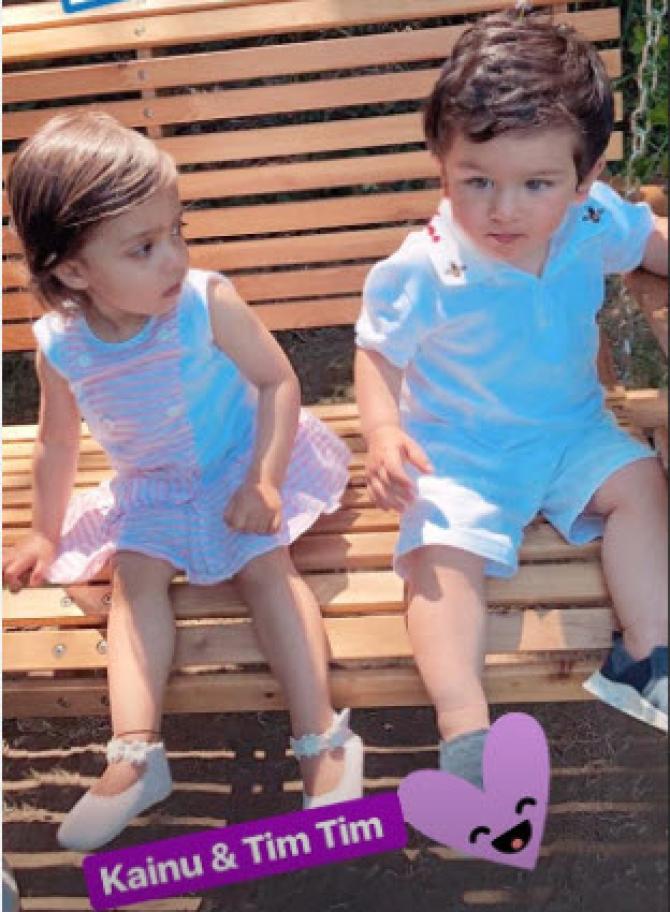 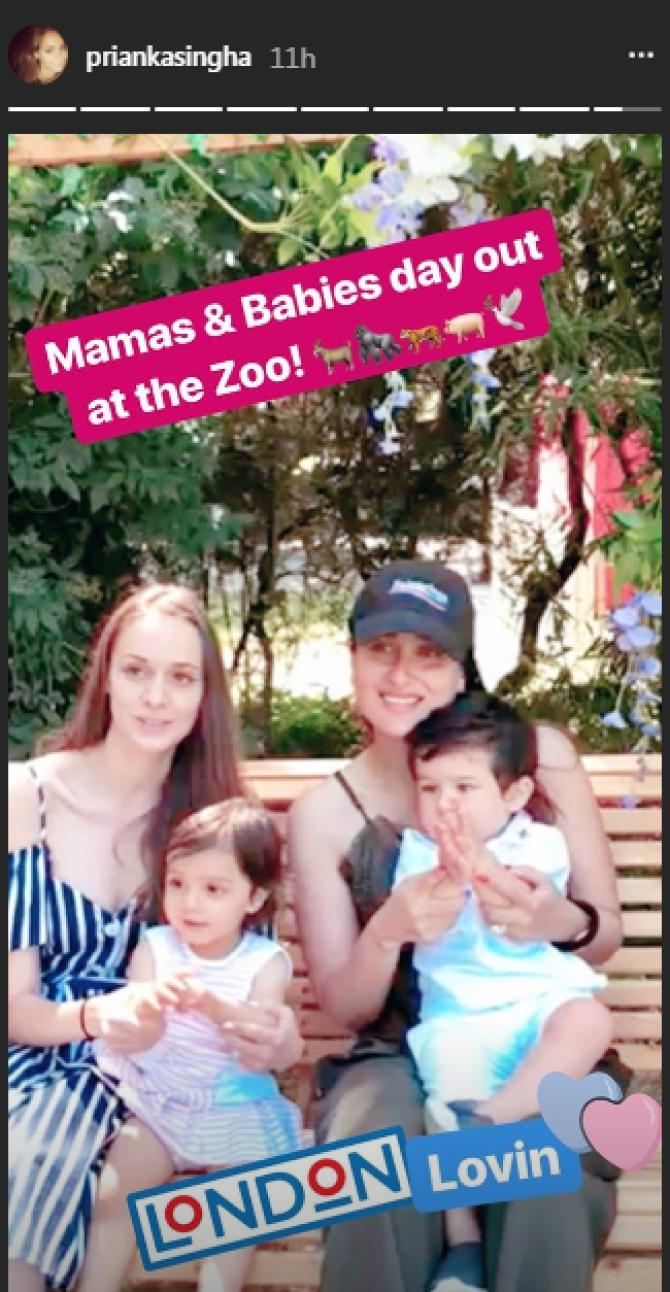 Coming back to Taimur Ali Khan and Inaaya Naumi Kemmu, the duo share a great bond, already! Speaking about the first time when Taimur Ali Khan had gone to see his cousin, Inaaya Naumi Kemmu, Soha Ali Khan had shared, “We took Inaaya to meet Taimur in his nursery and that's when they were both awake. They looked at each other for the first time. We tried to take a picture where there was Kareena holding Taimur and me holding Inaaya and we tried to get one picture where all of us are looking somewhat human and decent. I don't think we could. We have one picture where Inaaya is looking somewhere else but at least the rest of us are looking normal. It's difficult with babies but they're still coming into their own which is a little bit older. Maybe, her first birthday is when they will be able to interact a little bit more.” (Also Read: Arjun Rampal Posts A Beautiful Picture Holding His Baby Boy's Little Hand For The First Time) Taimur Ali Khan and Inaaya Naumi Kemmu share a striking resemblance with each other. About the same, Soha Ali Khan had shared, “They look a bit like each other. They are cousins after all. He’s her elder brother. Hope he will protect her in the near future. Bhai and I have an 8-year age difference. But Taimur and Inaaya will only have a year’s. I hope they grow fond of each other as they grow up, become best friends. Of course, Taimur is a little older so he will always be the elder brother to Inaaya, protective about her.” 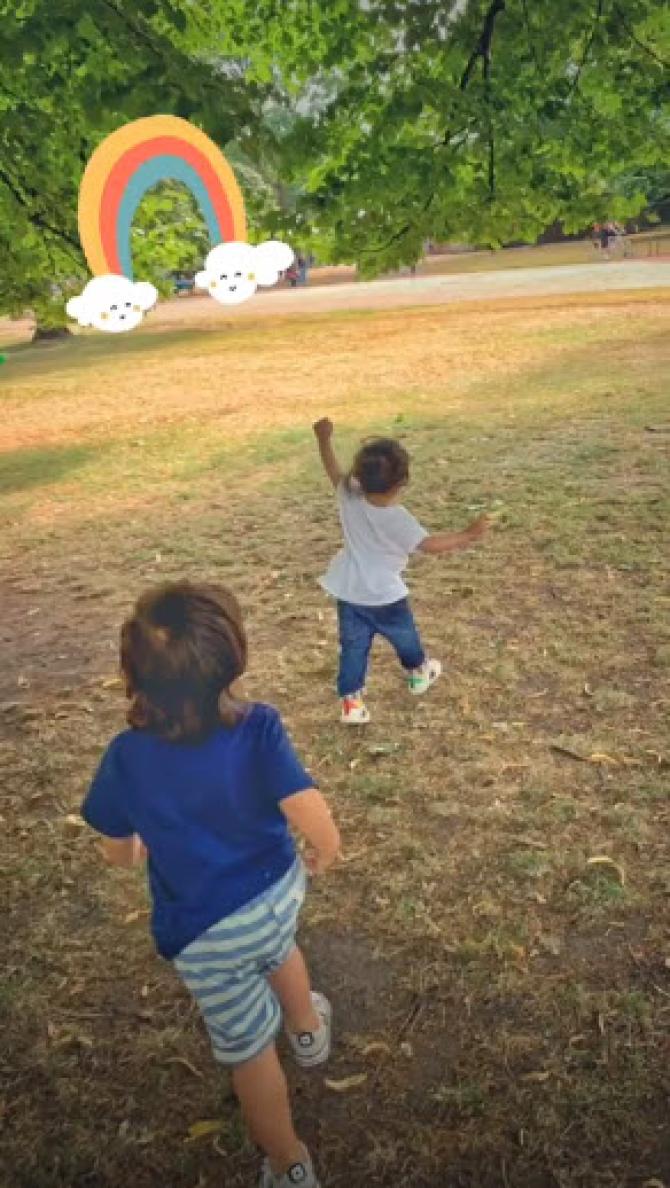 Soha, we can’t thank you enough for sharing wondrous glimpses from your London vacay. Here’s waiting for some more!