Celebrities getting trolled is one of the aspects of their glamorous life, but sometimes the trolling gets too personal, and Karanvir Bohra had gone through the same on the birth of his baby girl.

In India, the moment a couple embraces parenthood, everyone starts speculating whether they will have a baby boy or a baby girl. There is a societal pressure that having a baby boy completes the family. There are many couples, who have to fight through it and tell the world that they are fine with just having baby girls. And television actor, Karanvir Bohra had gone through a similar phase when he was blessed with a third daughter. Scroll down to know the actor's thoughts on the same! (Recommend Read: When Priyadarshan's Daughter, Kalyani Revealed The Reason Behind Her Dad And Mom, Lissy's Divorce)

It is said that lucky are the ones, who are given the opportunity to raise beautiful angels, and Karanvir Bohra and his darling wife, Teejay Sidhu has been blessed with not just one or two but three gorgeous princesses, who are going to rule their kingdom. The gorgeous couple had embraced parenthood journey after ten-years of marital bliss on November 19, 2016, in Vancouver, Canada. And in December 2021, the duo was blessed with a third angel.

Karanvir Bohra Shares A 90s Filmy Style Video With His Wife, Teejay Sidhu At The Airport Recently, in an interview with The Times of India, Karanvir shared his thoughts on having three daughters. The actor stated that he was trolled for having a third baby and some netizens had claimed that they were actually trying for a boy. Karanvir said, "We have twin girls and we never thought ki ek beta bhi hona chahiye. We only wanted a healthy baby. People used to say, ‘Ek beta aur ho jaaye toh family complete ho jayegi’. Although I come from a conservative background and am a boy myself, I never had any preference about the gender of my child. Even if we had a boy, he would have got the same love. I have never differentiated between a boy and a girl. Our three girls are like our Lakshmi, Saraswati and Parvati and God has chosen us to take care of these angels." 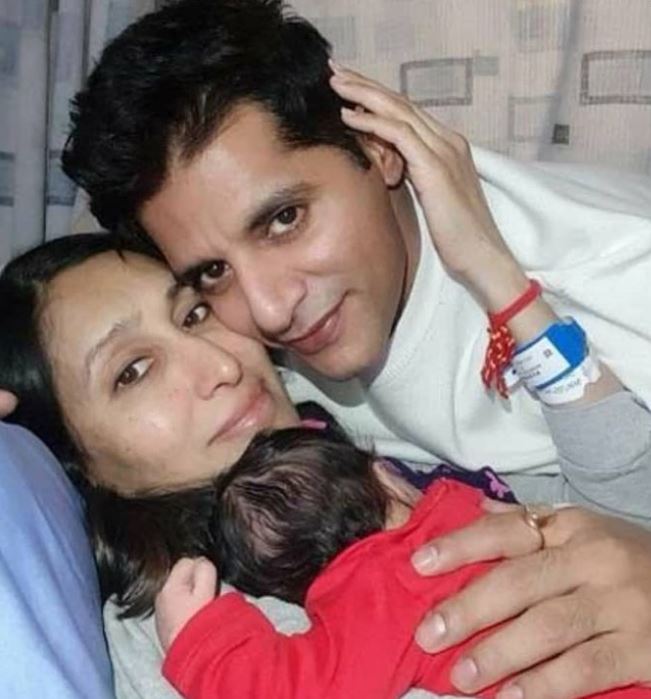 Karanvir also expressed his joy of becoming a father again of a baby girl. He stated that with the birth of another angel in the family, his life has become more heavenly. He also said that it’s a blessing when a child comes into your life and he feels immensely happy on being a dad of three daughters! He thinks he is the chosen one as God gave him three angels. Karanvir also opened up on handling daddy duties, "Everything about this whole process was an enchanting experience. I was inside the operation theatre and saw my baby taking birth and coming into this beautiful world. From that point, to see the baby grow, I am really blessed to have been a part of this whole process. I enjoy little things like watching her sleep, changing her diapers, etc. We take turns at night to sleep, as someone has to be awake to feed the baby every three hours and change her diapers. Now, staying up is such a beautiful feeling! Changing diapers is a piece of cake for me. My responsibilities have increased as I am a father of three daughters now." (Also Read: Mandira Bedi Shares A Video Of Her Adopted Daughter, Tara Getting Her First Haircut At A Salon) 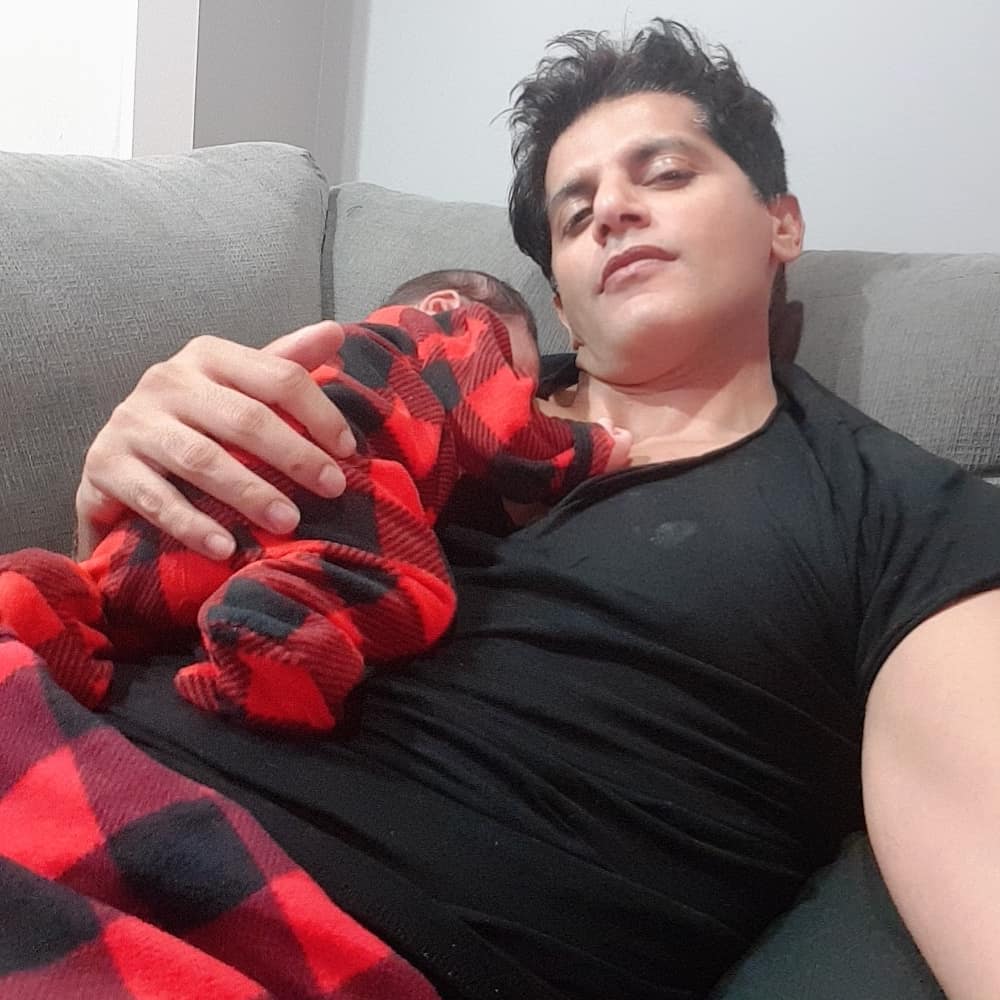 It was on December 21, 2020, when Karanvir had shared a video, wherein he had revealed that he has been blessed with another baby girl. He had posted a cute video and had captioned it as "You can't even imagine the bolt of happiness going through my veins. I can't believe that I'm a father of 3 girls. yahoo! Life can't get better than this, imagine ruling the world with these 3 queens in my life. Thank you, God for all these angels you have sent! I'll take the best care of them, because they are my #teendeviyan."

It was on the occasion of Karanvir's birthday, when the couple had shared their pregnancy announcement. Teejay had shared a picture with her hubby and had flaunted her baby bump. Alongside it, she had written, "So many blessings.. And now we get one more.. Every soul has a purpose, we don't choose them, they choose us. Thank you, little one, for believing we are worthy of you." (Don't Miss: Ankita Karan Patel Gives A Glimpse Of Her Little Munchkin, Mehr Patel's Shoe Collection) 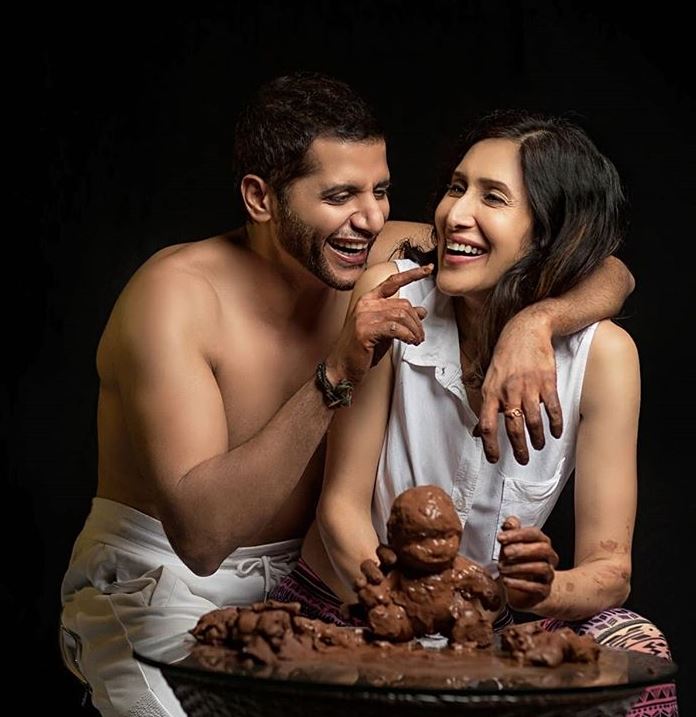 Well, there is no doubt Karanvir is a dotting daddy! 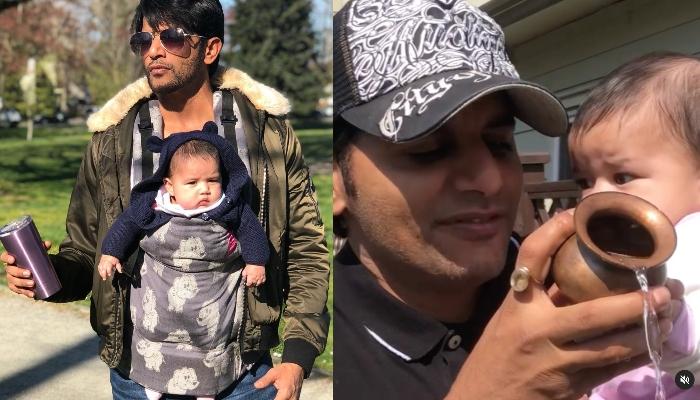 Television actor and daddy of three gorgeous girls, Karanvir Bohra shared how he made his youngest daughter, Gia Vanessa Snow's fifth-month birthday special by teaching her surya puja. It is said that lucky are the ones, who are given the opportunity to raise an angel. However, Karanvir Bohra and Teejay Sidhu are blessed with not