Not every parent is privileged enough to take a break for the birth of their child, without the leave negatively impacting their career. Fortunately, celebrities working in the entertainment sector have the liberty to not take up new projects, films or series and opt for maternity/paternity leaves to spend time with their newborn child. Over the years, we have seen male partners like Saif Ali Khan, Shahid Kapoor, Raj Kundra, Kunal Kemmu and a lot more celebrities, opting for paternity leaves and enjoying the fatherhood phase to the fullest. Ace comedian and actor, Kapil Sharma too, belongs to this list as when his wife, Ginni Chatrath had welcomed their first child, Anayra Sharma, the doting daddy had taken paternity leaves. Things were no different when Kapil and Ginni welcomed their second child in 2021 as the elated father had put his show on a halt to spend time with his family. (Also Read: Kareena Kapoor Khan Makes A Jaw-Dropping First Appearance After The Delivery Of Her Second Baby)

It was on December 10, 2019, when Kapil Sharma had announced the good news of his baby girl’s arrival which was three days before his first wedding anniversary with Ginni Chatrath. Kapil had tweeted, “Blessed to have a baby girl need ur blessings love u all jai mata di.” More than a year later, on February 1, 2021, Kapil had announced the arrival of his second child and revealed that Ginni had given birth to a baby boy. He had tweeted, "Namaskaar we are blessed with a Baby boy this early morning, by the grace of God Baby n Mother both r fine, thank you so much for all the love, blessings n prayers love you all ginni n kapil #gratitude." 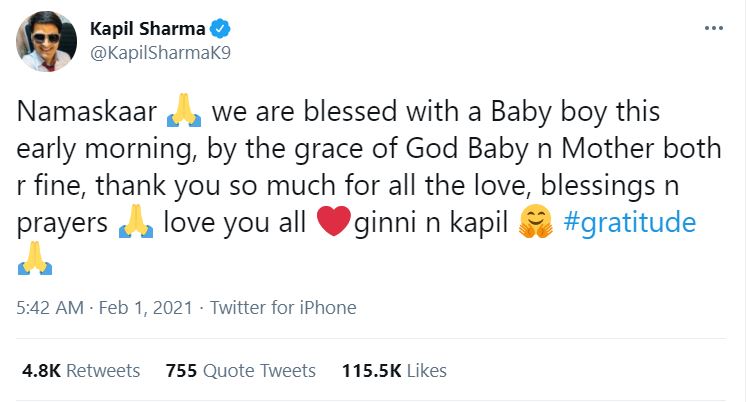 After the arrival of his second child, Kapil Sharma is spending quality time with his wife, Ginni Chatrath and their tiny tots, Anayra Sharma and newborn son. Kapil’s show, The Kapil Sharma Show is currently on a break and he is also recovering from a back injury. As per the reports, ending his paternity leaves, Kapil will travel to Dubai in April for the shoot for his next project. According to a report in Pinkvilla, a source revealed, “Kapil has already begun working on his material for the show, and is doing regular reading sessions with his team. He is currently recovering from his back injury, and will be travelling to Dubai next month to shoot for the special which will feature his trademark comedy style.”

Back in January 2021, Kapil Sharma had posted a video to announce his digital debut in the most hilarious way. In the video, Kapil could be seen struggling to pronounce the word "auspicious" during a shoot and when the director asks him to say his lines in Hindi instead for a smooth recording, the comedian had said, "Acha, vaise meri to English mein almost tyaari thi par thik hai. Agar Netflix khud hi desi hai to apne ko kya zabardasti English bolne ki. Toh main aa raha hu aapke TV, laptop aur phone pe, yaani Netflix pe. This was the auspicious news." Sharing the news of his first-ever association with Netflix, Kapil had written, “This is the auspicious news. Don’t believe rumours guys, only believe me, I’m coming to @netflix_in. Soon!” (Also Read: Suyyash Rai Shares A Hilarious Video Of His Pregnant Wife, Kishwer Merchantt's Mood Swings)

When Kapil Sharma and Ginni Chatrath welcomed their second child and the former had announced the good news on Twitter, their social media handles were flooded with congratulatory messages. On Twitter, one of his fans had asked him if they have named their second child. Responding to the question, Kapil had said that the namkaran ceremony, in which a newborn is usually given a name, has not yet taken place.

In a throwback interview with the Gulf News tabloid, Kapil Sharma had spoken about how he was enjoying the ‘incredible phase’ of his life with his first baby in the house. After the birth of his daughter, Kapil had remarked, “She’s such a sweet darling. I am enjoying this incredible phase in my life so much. It’s just brilliant. I meet my baby mostly at nights now. When I return home, she’s up, wide awake, alert and not sleeping. She’s a lot like me, I think. She’s wide awake at night … But she’s no trouble at all … My mother, my wife and all of us at home are so excited about her.” (Also Read: Arpita Khan Sharma Shares A Cute Video Of Her Daughter, Ayat Sharma Enjoying A Pool-Side View) 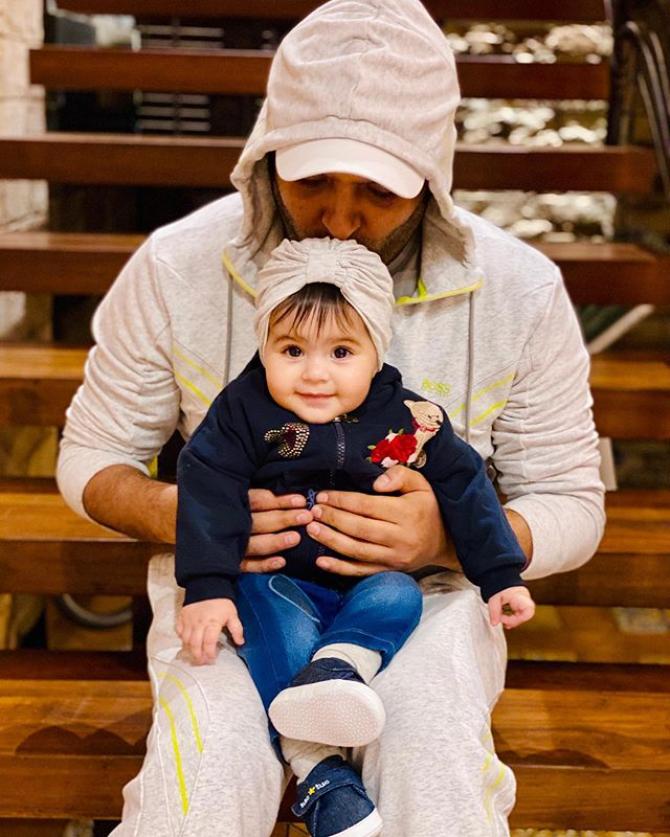 We hope Kapil and Ginni give a glimpse of their second child soon!