On Mental Health Day 2020, Aamir Khan's daughter, Ira Khan had shared her journey with depression. Kangana Ranaut compared her story to Ira's and commented on children from 'broken families'.

Known for not shying away from speaking her mind and her unfiltered comments on almost everything that’s going on in the news, Kangana Ranaut has always voiced her opinions fearlessly. Be it drug nexus in B-town, Sushant Singh Rajput’s death case, nepotism in Bollywood, selective activism by celebrities, targeting the Bollywood mafias or calling out Deepika Padukone saying 'Depression ka dhanda chalane wali', Kangana speaks her heart out in an unfiltered way no matter what the issue is or irrespective of how powerful the people are whom she is targeting. (Also Read: Aamir Khan's Daughter Ira Khan Finds An 'Alternative Career' Option, Her Mother Reena Datta Is Proud)

On Mental Health Day 2020, which is observed on October 10 every year, Aamir Khan’s daughter, Ira Khan had shared her journey with depression and how she has been dealing with the same from the past four years. Ira had captioned her video as “A lot has been going on, a lot of people have a lot to say. Things are really confusing and stressful and simple and okay but not okay and... life all together. There's no way to say it all in one go. But I'd like to think I've figured some stuff out, or at least figured out how to make it slightly more understandable. About mental health and mental ill-health. So come with me on this journey... in my awkward, quirky, sometimes-baby-voice-y, as-honest-as-I-can-be... way. Let's start a conversation. Happy World Mental Health Day. #worldmentalhealthday #mentalhealth #depression #journey #letsstartaconversation.”

Soon after the video became viral on social media, Kangana Ranaut took to her Twitter handle to comment on Ira Khan’s battle with depression. Comparing her story to Ira’s and commenting on how difficult it is for children from ‘broken families’, Kangana tweeted, “At 16 I was facing physical assault, was single handedly taking care of my sister who was burnt with acid and also facing media wrath, there can be many reasons for depression but it’s generally difficult for broken families children, traditional family system is very important.” 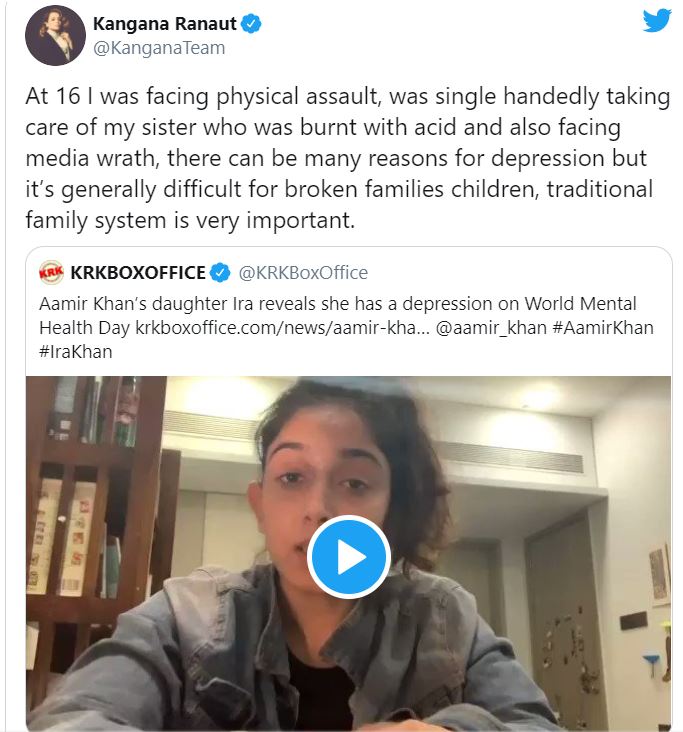 Aamir Khan and Reena Datta’s love story had begun with ‘Mere Saamne Wali Khidki Me, Ek Chaand Ka Tukda Rehta Hai’ and had then resulted in marriage. But soon, troubles clouded their paradise of love and they had parted ways. Though Aamir and his first wife, Reena’s love chronicle eventually ended with divorce, this ex-couple still shares a wonderful bond with each other. Even Reena and Aamir’s second wife, Kiran Rao share a warm bond. Aamir’s children, Ira Khan and Junaid Khan (from first wife, Reena) and Azad Rao Khan (with second wife, Kiran) share a sibling like love! So, Kangana Ranaut, in her tweet, might be hinting that Ira’s depression is due to the fact that her parents are divorced. (Also Read: Arjun Tendulkar's Birthday Wish For Sara Tendulkar With Childhood Picture Exudes Brother-Sister Love) 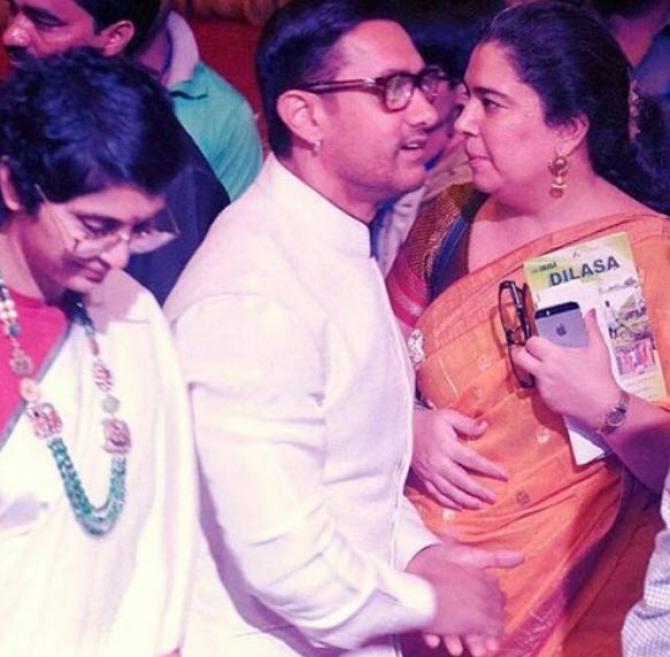 Speaking about her battle with clinical depression from the past four years, Ira Khan had said in her video, "Hi, I'm depressed. I have been for more than four years now. I've been to a doctor and I'm clinically depressed. I'm doing much better now. For over a year now, I wanted to do something for mental health, but I wasn't sure what to do. I have decided to take you on a journey - my journey - and see what happens. Hopefully, we'll get to know ourselves and understand mental illness slightly better. I've thought of so many things to say. What should I say? Why am I doing this?" Ira had concluded with "Let's start from where I started. What do I have to be depressed about? Who am I to be depressed? I have everything, right?" In 2019, Aamir Khan had appeared on the sixth season of Karan Johar’s chat show, Koffee With Karan. In a candid conversation about the wonderful relationship shared between his wife, Kiran Rao and ex-wife, Reena Datta, Aamir had stated, “Reena and Kiran are both warm and matured as people. I have not contributed anything to their friendship.” (Also Read: Kangana Ranaut Recalls How Her 'Dadi' Would Make Her Pray For A Brother When They Visited Temples) Kangana had often taken a dig on celebs for running ‘mental illness ki dukaan’ and now, she has commented on Ira’s post on depression. What are your views on her reaction? Let us know!