Kamya Panjabi and Shalabh Dang reveal how they had met and love had blossomed between them. The lovebirds have revisited the past and revealed some details about their initial meetings.

For some lucky ones, their first love works like magic but for some, things don’t work out for the first time and without holding onto it, one must let go and set out on a journey to find their perfect one. Experiencing a breakup or separation in the time doesn’t make the second or third love any less special. All that matters is holding onto love when you find the right one and never let them go. That’s what Banoo Main Teri Dulhann fame, Kamya Panjabi did when she found her Mr Perfect in a Delhi-based doctor, Shalabh Dang. (Also Read: Mona Singh Reveals If Her Hubby, Shyam Rajagopalan Has Watched Her Show, 'Kehne Ko Humsafar Hain')

It was on February 10, 2020, when Kamya Panjabi became Kamya Shalabh Dang post her wedding with the love of her life, Shalabh Dang. It was in February, last year, when Kamya had consulted the Delhi-based doctor, Shalabh for a health issue after a friend had recommended him to her. And within a month-and-a-half, Shalabh had proposed Kamya for marriage. Then, a year later, in the same month, Shalabh and Kamya were pronounced husband and wife. Kamya and Shalabh have been enjoying their married life with their kids, Aara (Kamya’s daughter from her first marriage) and Ishaan (Shalabh’s son from his first marriage).

While not much is known about how Kamya Shalabh Dang and Shalabh Dang had met and how love had blossomed between them, the lovebirds have revisited the past and revealed some details about their initial meetings. In an interview with Pinkvilla, Kamya revealed how it was love at first sight for Shalabh while she had taken her own time, "He fell in love with me very instantly but I took my little time to fall in love. We spoke to each other a lot on phone for a month or something but then we met when he was coming to Mumbai for some work. He met me and he shared that he liked me within the first few days and he made sure to make me realise it too in like 15 days."

Shalabh Dang revealed what qualities of Kamya Panjabi had made him fall for her, "When I saw her for the first time, I realised she is so warm, sensible and giving nature. So, these are a couple of things which I really loved. She was a single parent and so was I; so, I realised that we can really gell." Speaking about her reaction on being gifted Swarovski earrings on their first meeting, Kamya continued, "When he came to meet me for the first time, he gifted me Swarovski's earrings and I was surprised and I was uncomfortable as well. I was in a relationship where I did not get even a rose so when I get a gift like that, I was taken back but he was adamant. I took it so that he doesn't feel bad but the next time I met him I gifted him AirPods to balance it out." (Also Read: Sumeet Vyas Reveals If Ekta Kaul Had A Normal Or C-Section Delivery, Shares Why They Named Son, Ved)

When asked, “What was the first thing that you noticed in him?” Kamya Panjabi remarked, "Firstly, maturity and responsibilities towards family are what I looked at in him. Also, how responsible as a parent the person is, so these things attracted me to him. Secondly, he is understanding of my profession and that support mattered to me the most. And he loves unconditionally.”

Kamya Panjabi had given glimpses of her pre and post-wedding functions through her social media and while most had congratulated her for the new beginnings, some had trolled her for getting married for the second time. A user had questioned her for remarrying despite having a 10-year-old daughter, "You already have 2 children so why you do it? I mean phir shadi?" To which, Kamya’s BFF, Kavita Kaushik had given a befitting reply, "Because you get married so you have a partner/companion/best friend/soulmate.. for life! There is life beyond producing children, don't find faults in people who try to build their lives and find happiness, try to be happy for others instead of asking silly questions at such a happy time of theirs. Both their children planned most of the celebrations!" In November 2019, when Kamya Panjabi was trolled on a picture that she had posted with Shalabh Dang which had exuded volumes of their love, her then-beau had lashed out at the troll. Kamya had captioned her selfie with Shalabh as “I promise that you would wear this content expression on your face, always @iamkamyapunjabi #love #trust #care.” To this, a troll had written a nasty comment on the picture, “Why are you with this bekaar 2 rupees aurat Kamya. She is stooping so low degrading other women on a reality show. She will sell her own daughter for her pleasure.” This certainly hadn't gone down well with Shalabh, who had blasted out at the troll and had written, “Hey listen, whoever you r first have the balls to put your real pic. Who gave you the rights to talk such ill words about a woman and her innocent daughter ?? You surely need medical help!!” Kamya too, had tweeted, “Any word for this gentleman? Lagta hai inki maa ne inko bech diya tha ussi ki frustration yahan nikaal rahe hai..!!!” (Also Read: Kareena Kapoor Reveals One Regret She Has When Asked About Father-In-Law, Mansoor Ali Khan Pataudi) 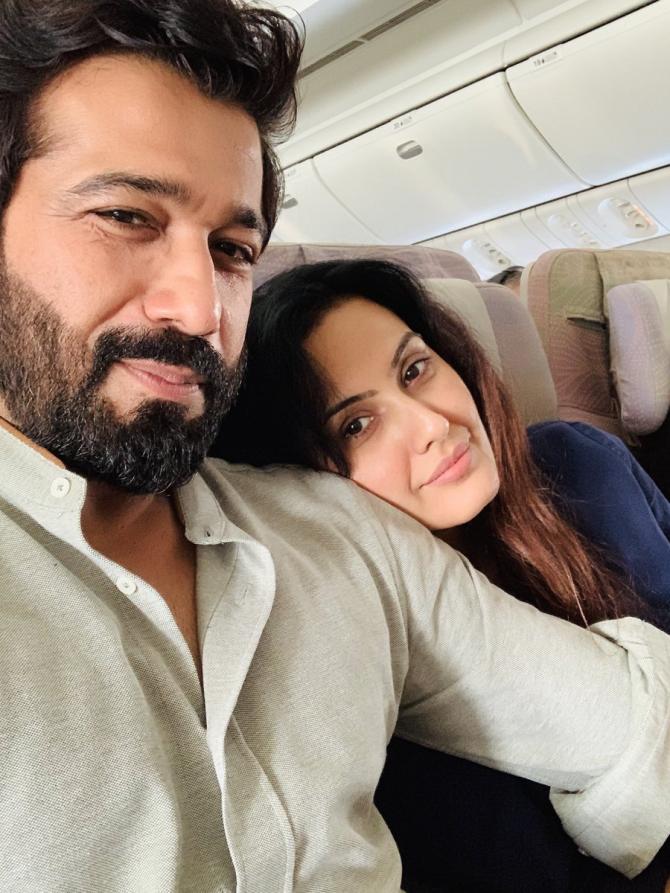 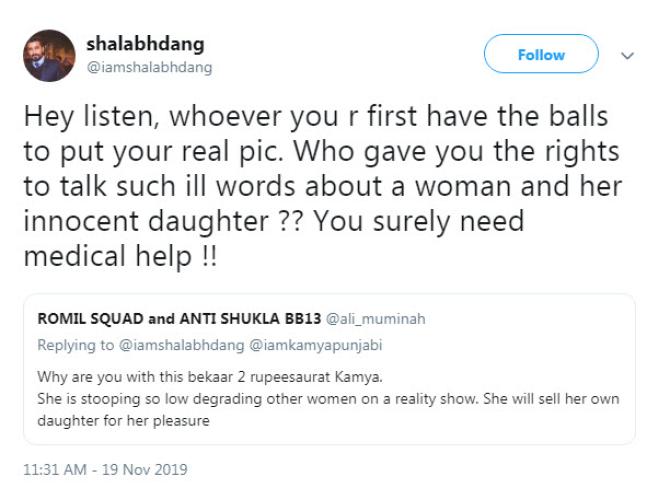 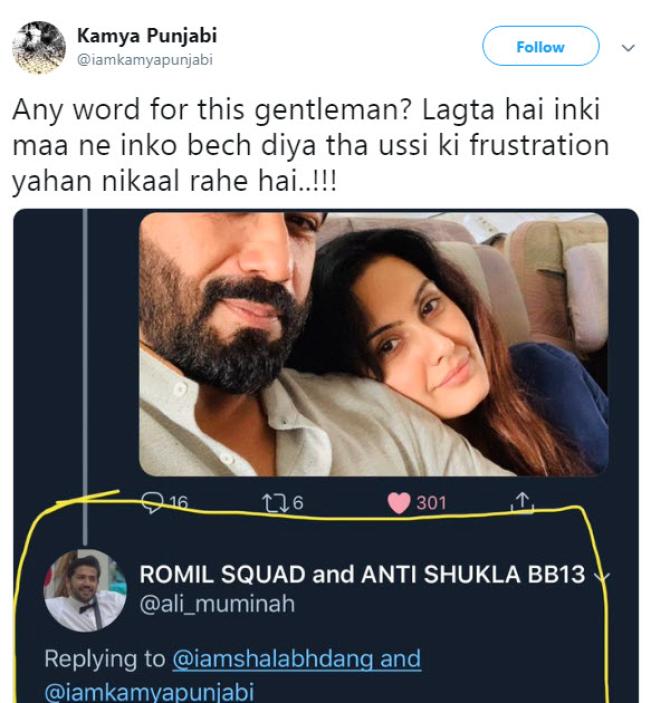 We are glad Kamya and Shalabh have found each other, as they not only love and respect one another but also stand up for their partner. Much love to their family of four!