Marriage is all about accepting your partner's every side and Kajol Devgan did exactly the same when she married her husband, Ajay Devgn. Scroll down as she narrates her experience!

When you are married, every day seems like a new adventure and you discover your partner more and more as years pass by. You tend to start living happily with the chaos of your partner, you make peace with their snoring habits and in no time they become an inseparable part of you. You start to forgive when your other half forgets the anniversary or an important date night. There are days when you cannot live without each other and then there are days when you cannot live with each other. And Bollywood actress, Kajol Devgan shares an exactly similar relationship with her hubby, Ajay Devgn. (Recommend Read: Amitabh Bachchan Shares An Unmissable Throwback Picture Of Sisters, Lata Mangeshkar And Asha Bhosle)

Kajol and Ajay have been living a 'happily ever after' since the day, they laid their eyes on each other. While Kajol never stops speaking, Ajay is more of an introvert, whose work speaks for him. On February 24, 1999, Kajol and Ajay had tied the knot and together they are nurturing their two kids - Nysa and Yug. There was a time when people used to stay that their marriage will not work, but Kajol and Ajay shut their mouths by creating a strong union. And they are soon going to complete 21 years of togetherness. Recently, in an interview with the Hindustan Times, Kajol was asked how different is Ajay 'the husband' from Ajay 'the co-star' and 'producer'. To this, the actress stated that she knows all three versions of him, and she had married all three of them. Kajol further added that Ajay is not too different from how she imagined him to be. In fact, all three versions of him were created in front of her. They’ve been married for 20 years, which is a long time. Kajol also added that when she married him, he wasn’t a producer then. (Also Read: Taimur Ali Khan Takes A Piggyback Ride On 'Abba', Saif Ali Khan's Back As He Hurt His Leg)

In an interview with Humans Of Bombay, Kajol had talked about her love story in detail. She had shared her first meeting with Ajay and had said, "We met 25 years ago, on the sets of Hulchul–I was ready for the shot & asked, ‘Where’s my hero?’ Someone pointed him out–he was broodily sitting in a corner. So 10 minutes before I met him, I bitched about him! We began talking on set & became friends. I was dating someone at the time & so was he–I’ve even complained about my then-boyfriend to him! Soon, we both broke up with our significant others. Neither of us proposed–it was understood that we were to be together. It went from hand-holding to a lot more before we knew it! We used to go for dinners & so many drives–he lived in Juhu & I, in South Bombay, so half our relationship was in the car! My friends warned me about him–he had quite a reputation. But he was different from me–that’s all I knew." The actress had further revealed how her father wasn't happy with her decision of marrying Ajay, "We’d been dating for 4 years, when we decided to get married. His parents were on board, but my dad didn’t talk to me for 4 days. He wanted me to focus on my career, but I was firm & he eventually came around. Again, there was no proposal–we just knew we wanted to spend our lives together." Last year on their 20th wedding anniversary, Kajol had shared a funny 'happily ever after' in pyjama story. She had posted a video and had captioned it as “Me: So what do you want to do today Ajay: I don’t know what do u want to do Me: what do u feel like Ajay: Let’s just stay in and order some good food Me: Perfect! And they lived happily ever after in pajamas.” (Don't Miss: Abigail Pande Reveals That She Will 'Soon' Marry Boyfriend, Sanam Johar, And We Are Excited!)

Well, we totally love Kajol and Ajay as a couple! What about you? 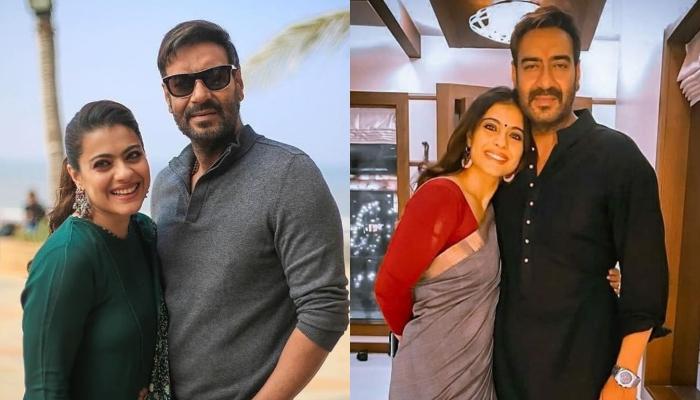 The media termed 'unlikely pair' of Kajol and Ajay Devgn had embarked on a journey of forever together on February 24, 1999. They had first met on the sets of Hulchul in 1995. Did you know that Kajol was not the first choice for Hulchul? Yes, Kajol had gotten last-minute