From her wisdom to her antics, Juhi Parmar's daughter, Samairra copies her mother to perfection and we have a proof of the same. Scroll down for the cute video of the mother-daughter duo!

Having a daughter is like having a BFF! They can change your mood in a fraction of seconds and they understand you like no one else. A daughter finds her idol in her mother and knowingly or unknowingly adapts her mother’s traits and habits. Every girl has a part of her mother in the way she presents herself and that is beautiful. Juhi Parmar’s daughter, Samairra is growing up to be like her mother with each passing day. From her wisdom to her antics, she copies her mother to perfection and we have a proof of the same for you! (Also Read: Has Karishma Tanna Parted Ways With Rumoured Beau, Pearl V Puri? Find Out The Detailed Report Inside)

Juhi Parmar had become a household name with her stint in the popular serial, Kumkum. The actress had gotten married to actor, Sachin Shroff on February 15, 2009, and the couple has a daughter, Samairra together. After eight years of marital bliss, Juhi and Sachin had parted ways and the custody of their daughter was given to Juhi. Juhi is a hands-on mother as she ensures that her daughter never has a dull moment in her life. 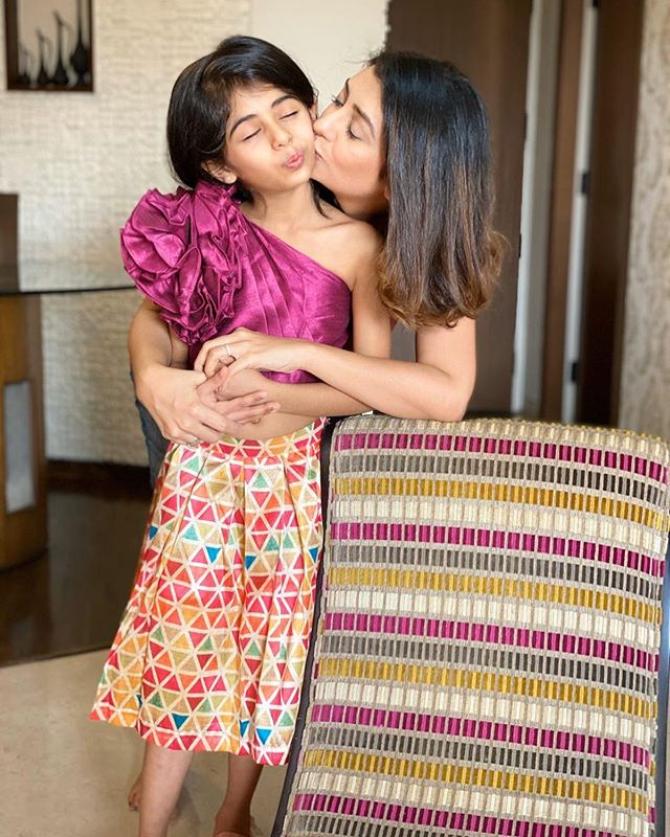 Even with the rise in the number of Coronavirus cases, the life has started to get back to normal as people are now stepping out for work. Juhi Parmar, who is a protective guard for her daughter, Samairra ensures that her daughter stays at home and enjoys the mumma-beti time. Taking to her IG handle, Juhi shared a reel video of her ‘Mumma-Ginni’ fun time. In the video, we can see the mother-daughter duo dancing on Sridevi’s song, Hawa Hawai and the little girl completely stole the show. The mother-daughter duo can be seen twinning in their Ginni and Ginni’s Mumma hats, and their actions are perfectly coordinated. However, it was Samairra’s cute expressions that got us hooked to the video. Sharing the video, Juhi wrote, “Aaki chiki, laki chiki, chiki laki choom. Rapchiki laki chiki laki chiki choom. Beating the weekday blues with Mumma-Ginni Fun Time!” Take a look:

Juhi Parmar is quite active on her social media handles and always makes sure to share pictures and videos with her little munchkin. On July 26, 2020, Juhi had taken to her IG handle and had shared a video of the beautiful surprise she had received from her 7-year-old daughter, Samairra on Parent’s Day. Along with the video, Juhi had written that there is no role greater than being a mother. Her note could be read as “Sunday started with this lovely surprise as my little Sammy surprised me for #ParentsDay. Life truly can be lived in these small moments, in these memories which you are gifting me Samairra. No role more special than that of being your mother!” (Recommended Read: Balika Vadhu's Gauri, Anjum Farooki Welcomes A Baby Girl, Announces Her Unique Name With Her Photo)

Samarria is perfectly taking every trait from her mother and we can see a star in making! On May 20, 2020, Juhi had taken to her Instagram handle and had shared how her seven-year-old girl had turned into a makeup artist to do her makeup. Juhi had shared a glimpse of the process, wherein we could see little Samairra doing her mom's makeup. Alongside it, she had written, "Lockdown has taught us many things....most important one is to never take anything in your life for granted! The last two months have given Samairra and I so much time to spend together, which has just made our bond all the stronger. We keep trying, we keep experimenting and we keep doing whatever we can to keep ourselves happy and busy in the confines of our home. And this time around, Samairra takes over. She loves makeup just the way all girls do and she's giving me a makeover!" (Don't Miss: On Rishi Kapoor's Birth Anniversary, Son-In-Law, Bharat Sahni Shares A Photo From Their Special Trip)

We can definitely see an actor in Samairra, owing to her cutesy expressions in the video!