It was on January 18, 2020, when Shabana Azmi had met with an accident and had faced various injuries. In an interview, Javed Akhtar shared details about her health and discharge from the hospital.

Whenever we want to confess our love for someone and whenever we feel like expressing our thoughts and whatever that is going on in our daily life, we always rely upon the breathtaking shayaris of Javed Akhtar. Javed ji has explained the true meaning of love through his lyrics and shayaris and we can’t agree more on the fact that he is the one who helps couples express their emotions perfectly. It is his words that create an aura and magic in the atmosphere. We all have grown up listening to his shayaris and songs and he has shown us the truth of real love and has made us believe that it is okay to get your heart broken and then fall in love again. From Kyun darein zindagi mein kya hoga? Kuch na hoga toh tazurba Hoga, Kabhi jo Khwabb tha vo paa liya hai, Magar jo kho gayi vo cheez kya thi to Yaad usko bhi ek adhura afsana toh hoga, kal raste main usne hum ko pahchana toh hoga, Javed ji’s shayaris have touched not only our heart but our soul also. (Recommended Reda: Amy Jackson Shares A Funny Take On Motherhood In Her Latest Holiday Picture With Son, Andreas)

Just like his shayaris, Javed Akhtar’s love story with Shaban Azmi also touches our heart and soul. It was in the year 1984 when Javed ji had tied the knot with Shabana ji in a traditional Muslim ceremony. Hailing from the same background, Javed ji had first met Shabana ji at famous poet, Kaifi Azmi’s house and he was instantly drawn towards her. In an interview with the DNA, Shabana ji had shared the secret of their 35 years of successful marriage and had said that their marriage is successful because they never meet. She said, “There are times when we've said high and bye at the airport! Jokes apart, we have the same family background and so much in common that ours should have been an arranged marriage.” Javed ji had celebrated his birthday on January 17, 2020, and it was a star-studded affair, but on January 18, 2020, Shabana ji had met with an accident at the Mumbai-Pune Expressway. Shabana ji was rushed to the hospital immediately and her family members had reached there to be by her side. Now in an interview with Bollywood Hungama, Javed ji shared details about her discharge and said, “Shabana is completely recovered now. She has been fully healed for some time now. But the doctors decided to keep her under observation in hospital for a few days extra and I completely agreed with them. She is now ready to return home. We are bringing her home on Friday morning.” Javed ji was thankful that she got away with minor injuries and said, “It could have been a lot worse. I’d say Shabana had a miraculous escape.” During the accident, Shabana ji was travelling in a different car and Javed ji’s car was behind hers. According to the reports of ANI, Shabana ji's Safari car was rammed into a truck near Khalapur which is over 60 km from Mumbai. Shabana ji, who was sitting next to her driver had sustained injuries on her face, neck, and chin while her husband, Javed ji was reported to be safe. The Raigad Police had issued an official statement regarding the accident, which could be read as, “Shabana Azmi and her driver was injured in an accident near Khalapur on Pune-Mumbai Expressway. While they were driving from Pune to Mumbai their vehicle hit by a truck on the expressway. Javed Akhtar was also present in the car who is safe. Both the injured have been shifted to MGM Hospital.” (Suggested Read: Arjun Punjj Penned A Loveliest Birthday Wish For His Wife And 'Rockstar', Gurdip Punjj) 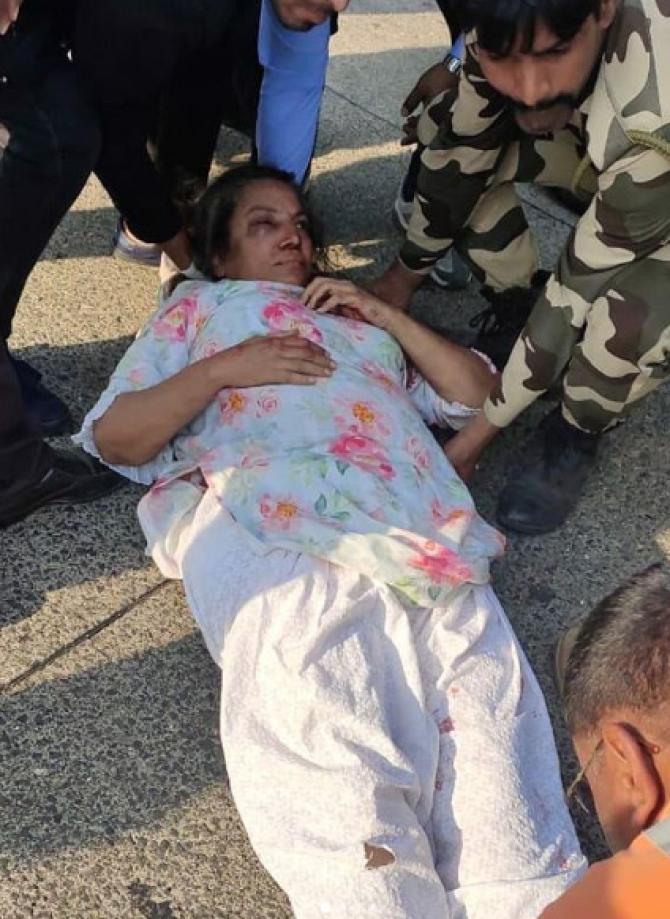 On January 22, 2020, in a yet another interview with Bollywood Hungama, Javed ji had shared health conditions of Shabana ji and had said she is the ICU, but all the scan reports are positive. It seems there’s no serious harm done. Earlier, the hospital's CEO, Dr Santosh Shetty had also stated that the actress is stable and under observation. Javed ji had also taken to his Twitter handle and had updated about Shabana jis’ health. His tweet could be read as “Our family would like to thank all the friends and well-wishers for their concern and messages for @AzmiShabana. This is to let everyone know that she is recovering well and most probably will be shifted to a normal room tomorrow.” Coming back to Javed ji and Shabana ji’s love story, in an interview with the DNA, she had shared details about their meeting at Kaifi Azmi’s house and falling in love. when they met, Javed ji was already married to Honey Irani and was a father of two children Zoya Akhtar and Farhan Akhtar. She was quoted as saying, “If you consider the fact that one seeks the perfect match of backgrounds for an arranged marriage, then this could well have been the perfect arranged marriage. He (Javed) was already married by the time I realised how well suited we were. We stayed away from each other for as long as was possible.” On December 10, 2019, Javed ji and Shabana ji had completed 35 years of their 'happily ever after' and the actress had taken to her Instagram handle to post a heartfelt wish. Sharing an unseen picture, Shabana ji had written, "35 years together today and still smiling mashallah! The secret of success .. Javed says we are such good friends that even marriage couldn't destroy our friendship." (Must Read: Anurag Sharma And Nandini Gupta's Haldi Pictures Are Setting Major Wedding Goals) We wish Shabana ji a healthy and speedy recovery! Birthdays are always special as it is a way to thank God for bringing you to this beautiful world, where you met different people and learn from them. You create memories throughout your journey of life and cherish them forever. The journey of life from the first cry in your