'KGF 2' actor, Sanjay Dutt turned 61 today and a picture from his birthday celebrations with parents, Sunil Dutt and Nargis Dutt will make you teary-eyed for sure. Take a look!

The son of two legendary superstars of the Indian cinema, Sunil Dutt and Nargis Dutt, Sanjay Dutt was destined for greatness in the world of glamour and glitz. And he did achieve everything that is out there to win. But it was his journey that was full of twists, turns, and many controversies. While some say, he's a star made out of controversy, and some say he's an inspiration for achieving what he has achieved overcoming that dark phase of his life. There's no doubt that Sanjay Dutt has redefined the image of villains in Bollywood with his characters like Raghu in Vaastav, Kancha Cheena in Agneepath, Ahmad Shah Abdali in Panipat, and many more. (Recommended Read: Dilip Kumar's Rare Picture With Mother-In-Law, Naseem Banu And Wife, Saira Banu Is About Family Love)

The actor is celebrating his 61st birthday today, and millions of people are pouring their warm wishes for him on the internet. And, we too bought an unseen picture from the memory lane that features his late parents, Sunil Dutt and Nargis Dutt from one of his birthday celebrations. Take a look! 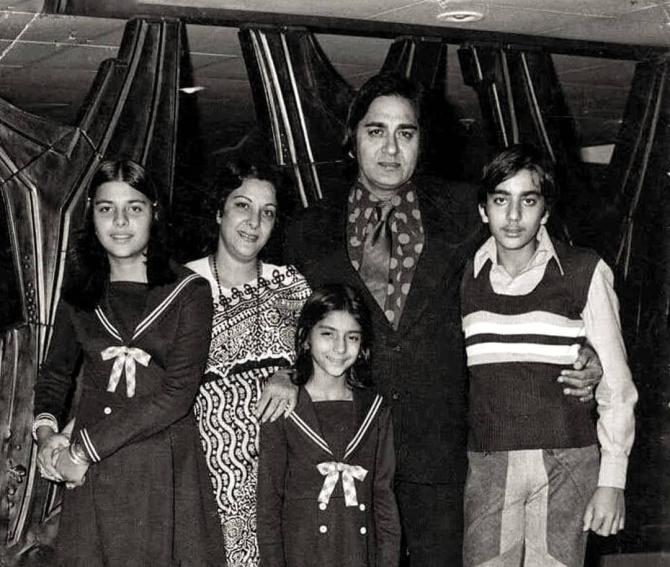 On July 29, 2020, Bollywood's one of the most exceptionally talented and a star made out of controversies, Sanjay Dutt has turned 61 and wishes are flooding in for the superstar all over the internet. However, we stumbled across a monochrome throwback picture from one of his birthdays when he was just a small kid. In the beautiful frame, we can see Sanjay's father and legendary actor, Sunil Dutt alongside his mother and one of the finest actresses ever, Nargis Dutt. The picture is adorable in all sense as we can see little Sanjay cutting the cake with his parents by his side and the beautiful smiles on all three of them tell everything about those beautiful moments. Take a look. (Don't Miss: 26 Popular Bollywood Celebrities Who Are Related To Each Other And Not Many Of Us Know About It) Everyone knows that there was a phase in Sanjay Dutt's life when the entire world had turned their back against him, and it was his father, Sunil Dutt, who always stood like a pillar of strength for him. It was only Sunil ji, who had taken his son, Sanju out of his drug addiction and had helped him fight with the other demons of his life. On June 6, 2020, Sanjay Dutt had taken a trip down the memory lane on his father's 91st birth anniversary and had shared a picture of his late father from his archives. He had taken to his Instagram handle and had shared a throwback picture of himself with Sunil ji. Along with the picture, Sanjay had penned down an emotional birthday note for him, and it could be read as "You have always been my source of strength and happiness. Happy Birthday, Dad!" followed by a heart emoticon. Sanjay's daughter, Trishala Dutt had commented on his post and had written, "Happy Birthday Dadaji". Sanjay's wife, Maanyata Dutt, had also reacted with a couple of heart emoticons. 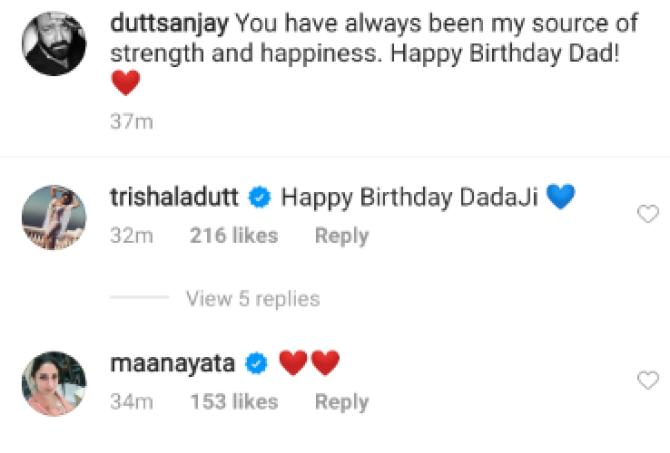 However, Sanjay Dutt was more close to his mother, Nargis Dutt, who had left for the heavenly abode, just three days before the release of her son's debut movie, Rocky in the year 1981. In a 2018 interview with India Today, Sanjay had talked about the things he had learned from his mother, Nargis, and had stated, "The most important thing is to be a good human being. Everything else comes after that. I learned from both my father and mother. I'm passing on to my kids. I hope my wife doesn't pamper my children the way my mother did me. My wife tells me if the kids don't hate the parents when they are growing up, there is something wrong in their parenting. I am tough to my children when I want to be tough." (Also Read: When Salman Khan Talked About His Wedding Rumours With Rumoured GF, lulia Vantur For The First Time)