Scrolling through our IG handle, we stumbled upon a candid romantic video of Shah Rukh Khan and Gauri Khan, which looked like from the 90s. Gauri flaunted her 'sindoor' with utter pride!

If you think of the lady, who actually started the culture of ‘Bollywood Wives’, then it has to be Gauri Khan. Not being a part of the glamour world, Gauri had gradually made her place in the industry and built a nest not only for herself but also a happy abode for her fellow Bollywood wives. Gauri Khan has made a name of herself in the world of interiors designing and she doesn’t need any introduction now. Her warmth is not the only factor that makes her Bollywood’s favourite, but her love story with Shah Rukh Khan has melted million hearts. (Also Read: Did You Know Shah Rukh Khan And Gauri Khan's First Night Was Ruined By Hema Malini? Here Is How)

Shah Rukh Khan and Gauri Khan are what they call ‘True love’. Belonging to Delhi, the two had met each other in a party in 1988, and Cupid had struck them with its sharpest arrow. Shah Rukh had madly fallen in love with Gauri, enough that he had followed her to Mumbai, even without knowing her whereabouts. Fighting for their love despite their contrasting backgrounds and religious beliefs, their union on October 25, 1991, had made us believe that love can conquer it all. While Gauri is a Hindu, Shah Rukh is a Muslim and yet the two never forced their religion on each other and their three kids, Aryan Khan, Suhana Khan and AbRam Khan happily accept and worship both the religions.

While SRK and Gauri are often subjected to religious hatred, they have never let this affect their relationship and their love for each other still feels fresh. Scrolling through our IG handle, we stumbled upon an adorable video of SRK and Gauri, which looks like from the 90s. It seems that the couple had attended some award show and was busy in a conversation. In the video, Gauri can be seen donning a high knot bun and typical 90s makeup with big bindi and brown lipstick. It was her sindoor that caught our attention as she flaunted it with utter pride. On the other hand, SRK can be seen wearing a black shirt and black coat, whispering something in Gauri’s ear to which she laughs and responds. Their candid romantic video made us go aww!

In a throwback interview of Shah Rukh Khan with veteran actress, Farida Jalal, he had recalled a funny incident that had happened during his wedding reception. He had revealed, “I remember, when their whole family, old fashioned people, I respect them all and respect their beliefs but at that time, in that old-fashioned reception, all of them were sitting there when I came in at 1:15, whispering “Hmmm.. He’s a Muslim boy. Hmm.. Will he change the girl’s name? Will she (Gauri) become a Muslim? (Don't Miss: Unseen Photo Of Shah Rukh Khan And Gauri Khan As She Flaunts Mangalsutra-Chooda On Wedding Reception)

SRK being a man of wits displayed his humour immediately, leaving Gauri’s family in utter shock. He had revealed that he had, in fun, asked his wife, Gauri to wear a burqa and change her name to Ayesha. Sharing the same, he had continued, “They were all talking in Punjabi. So, I looked at the time and said, “OK Gauri, put on your ‘burqa’ and let’s read the namaaz now." The whole family stared at us wondering if I had already changed her religion already. So I told them, “From now on she will wear a burqaa all the time, she won’t ever leave the house and her name will be changed to Ayesha and she will be like this.”"

When Gauri Khan had appeared on Koffee With Karan season 1, she was asked about the difference in her and Shah Rukh Khan’s religion. Sharing that she respects her husband, Shah Rukh Khan’s religion but that doesn’t mean she would convert, Gauri Khan had said, "There is a balance, I respect Shah Rukh's religion but that doesn't mean that I would convert and become a Muslim. I don't believe in that. I think everybody is an individual and follow their religion. But, obviously there should be no disrespect. Like Shah Rukh would not disrespect my religion as well." (Must Read: Shah Rukh Khan Reveals He Had Tricked Gauri Khan For Their Honeymoon To Darjeeling Instead Of Paris) 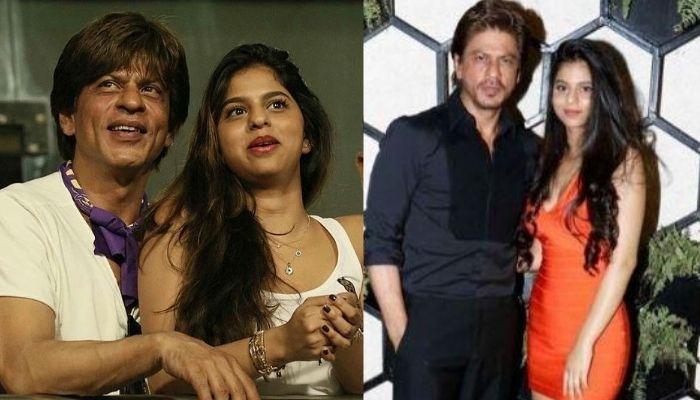 When a baby is born, the parents and their respective families start to wonder who the baby looks like. From the eyes to nose to lips, everyone starts guessing about the baby’s resemblance. While at first, the baby might look like his or her mother, later the child might look