Yesterday, on January 18, 2020, Shabana Azmi and Javed Akhtar's car met with an accident. Today, Farhan Akhtar and his girlfriend, Shibani Dandekar visited the actress in the hospital.

It is said that there is no light without a shadow and there is no happiness without pain. In one moment, we are laughing and partying with our family and the other we are crying over a loss. Life is uncertain but it is the support of the family that helps us fight the gloomy days. And something similar happened with Bollywood actor, Shabana Azmi, who met with a car accident while travelling at Mumbai-Pune Express highway and had sustained severe injuries. (Recommend Read: Sanjay Dutta Shares An Adorable 'Full-Split' Picture Of Son, Shahraan, Calls Him Little Karate Kid)

Following which, Shabna ji was rushed to MGM hospital in Panvel and later, she was shifted to Kokilaben hospital. According to the reports of ANI, it is said that Shabana ji's Safari car was rammed into a truck near Khalapur which is over 60 km from Mumbai. The actress was sitting next to her driver and sustained injuries on her face, neck, and chin. Thankfully, her husband, Javed Akhtar is safe as he was travelling in another car right behind her.

Shabana ji had changed the societal notion regarding a 'stepmother'. In an interview with the Verve magazine, Shabana ji had talked about her relationship with Javed ji's kids, Farhan and Zoya (from first wife, Honey Irani). She had said, "They were both very young and it is to their mother’s credit that she did not prejudice them against me. She is the light of their lives and it’s her generosity that helped us all tide through the initial years, which are the toughest." 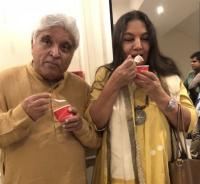 In the same interview, Shabana ji had also shared an anecdote of her relationship with her step-son, Farhan. She had revealed, "I think it’s difficult for children to decide what to call their stepmom. Aunty seems fake and you can’t say Mom the Second [laughs] so it is a struggle. Farhan was only 10 years old when I asked him to call me by my first name and I could sense his relief as the burden got lifted from his shoulders." She had further added, "They both make me laugh a lot. They are respectful but irreverent, which I find delightful. They are socially responsible adults and I like to think that, along with their parents, I’ve had some role to play in that." (Don't Miss: Kamya Panjabi Shares A Glimpse Of Her Wedding Card, All Set To Tie The Knot With Beau, Shalabh Dang)