Divyanka Tripathi is all praises for husband, Vivek as he cooked a delicious pasta for her, kisses his hands. Check out the video inside! 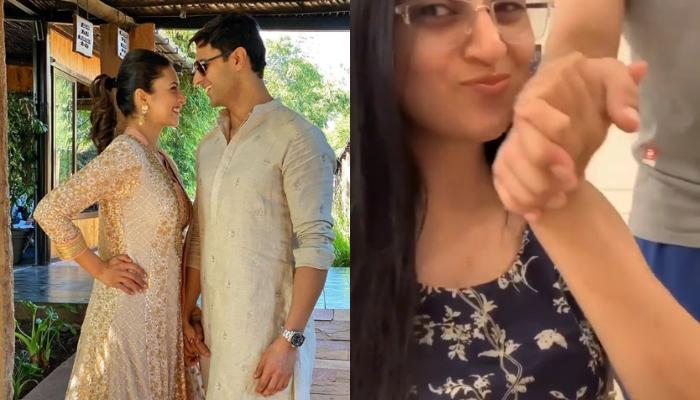 Courtesy to the lockdown and the trends on social media, we're one hundred per cent certain that the highest increase in efficiency overall would be in peoples' culinary skills. Everyone is resorting to the kitchen these days to try their hands at cooking and are sharing the pictures and videos of the same on social media. What are you doing, by the way? We know! (Recommended Read: Karan Johar's 'Tijori' Goes For A Toss, Yash and Roohi Confuse It With Washing Machine)

Celebrities are cooking for their loved ones and are sharing pictures and videos of the whole cooking process and their reactions, and what are we doing? We are just drooling over those delicacies by looking at them on our phone screens because we're too lazy to try something of our own. Now, if this didn't motivate you to leave your bed and polish your culinary skills, I don't know what would. Anyway, check out below what made Divyanka Tripathi kiss her husband, Vivek's hands, on camera!

The ever doting husband, Vivek Dahiya cooked a delicious, mouth-watering, sizzling hot pasta for darling wife, Divyanka, and she couldn't stop praising him. So much so, that Divyanka even went on to kiss her husband's hands, on camera, who cooked such tasty pasta. Divyanka can be seen saying, "It's seriously yummy! Garma-garam ye jo pasta mila hai mujhe aj..." She then called Vivek and said, "Viv, hath dena" and proceeds to plant a lovely kiss on his hands. To which, Vivek said, "Chalo banane wale ke hath katne ki nahi, choomne ki bat ho rahi!" And then Divyanka goes on to butter him by saying, "Nahi mai chahti hu ki aap roz aise bnao, aise surprises milne chaiye roz!" How adorable! Take a look at the video here:

Divyanka Tripathi Dahiya and Vivek Dahiya are no doubt the television world's favourite couple and their social media PDA moments make our hearts explode! Recently, Divyanka had adored her loving husband by clicking candid pictures of him and Vivek had an epic reaction to the same. On April 29, 2020, Vivek had shared two pictures of himself on his Instagram handle, wherein he could be seen sitting on his couch, reading. What was special about those pictures? Well, the doting wife, Divyanka had clicked both the pictures, one of which when Vivek was aware of himself being clicked and gave a nice pose as well. The other when he wasn't looking and Divyanka had slyly clicked a picture of a yawning Vivek. Vivek had captioned both the pictures as, "When I’m aware of being clicked v/s not. Your choice of preference? #LifeUnderQuarantine #QuarantineSeries #CompleteLockdown." (Also Read: Amitabh Bachchan Recalls When Abhishek Was Almost Lost During A Trip With Jaya Bachchan And Shweta)

Fate works in mysterious ways and we have no idea what does it has in store for us. It was the fate only which had brought Vivek and Divyanka close and had weaved their love story with coincidence! Divyanka was struggling through her breakup with television actor, Sharad Malhotra after 10 years of dating when Vivek had entered her life. Vivek had spilt some beans on his and Divyanka's love story in an interview with DNA. In his words, "When a co-actor suggested that Divyanka and I should meet as both of us were single, my first reaction was 'What!' I had never thought of having an arranged marriage because I feel in today's times you need to take your time, know a person and not rush into it. But he insisted that we at least go for a coffee and we did. We had met with the perspective of seeing others as a life partner and in the first meeting itself, I was largely convinced that she is the one for me. But I decided not to be hasty about it." (You May Also Like: Sachin Tendulkar Shares A Picture Of Delicious Beetroot Kebabs Made By Daughter, Sara Tendulkar)

Who is your favourite couple of television? Let us know!