Divyanka Tripathi Dahiya posted a sweet picture of herself from a photoshoot on her IG handle, and a fan commented on her post asking when will she become a mother. Check out her witty reply.

With the advent of social media, it had bridged the gap between celebrities and their fans. It has given the fans an opportunity to interact with their favourite celebs and while the stars too have always expressed how overwhelmed they are with the love showered on them on social media, sometimes they entertain us with their comments dripping in sarcasm, wit and humour. Divyanka Tripathi Dahiya is one such celebrity, who loves interacting with her fans on social media and often replies on the comments. (Also Read: Maanayata Dutt 'Enroutes Life' With Sanjay Dutt, Pens A Note On Facing Fears Amid His Cancer Battle)

Divyanka Tripathi had added ‘Dahiya’ to her name on July 08, 2016, when she had entered the holy bond of matrimony with Vivek Dahiya. It has been more than four years since Vivek and Divyanka are spreading their magic of love and inspiring everyone, the common stereotype i.e., pregnancy that surrounds every married couple, didn’t leave this celeb couple as well. Though time and again, Divyanka and Vivek had clarified the pregnancy rumours to be baseless, in a 2019 interview with SpotboyE, the Banoo Main Teri Dulhann actress had revealed that they aren’t planning for a baby soon and whenever she’ll give a green signal, her husband will support her. Divyanka had said that Vivek knows that at the current moment, she is not ready for the baby. 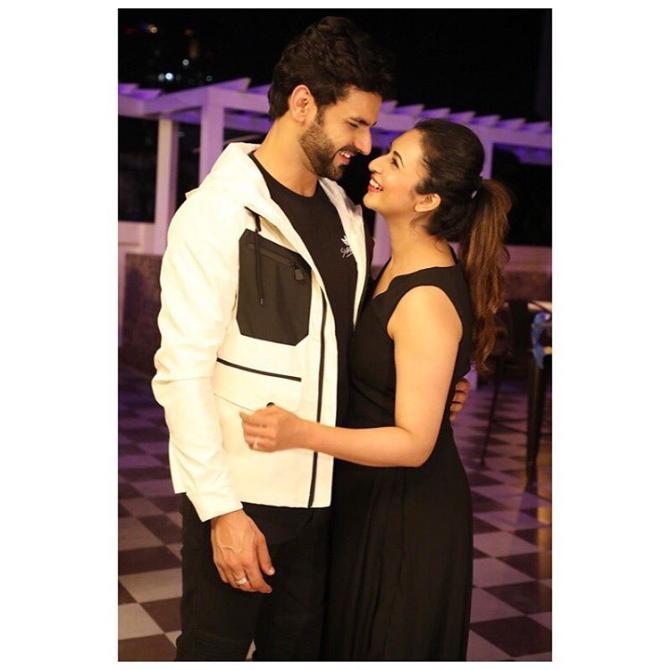 Divyanka Tripathi Dahiya posted a sweet picture of herself from a photoshoot on her social media handle, in which she flaunted comfy, chic and stylish look in a pair of beige co-ords. With blowdried tresses and pink lips, Divyanka had surely made heads turn with her overall look and she captioned her post as “I laugh at those who've worked for erratic TV schedules for so long that their concept of days & time tend to get disarrayed. Anyway #HappyFriday #TGIF.” On Divyanka’s post, one of her fans commented, "Ma'am we all want to you to become a mother." Divyanka’s witty reply to her fan can be read as "then you all volunteer to baby sit my baby while I work." On August 23, 2020, Divyanka Tripathi Dahiya had posted twinning pictures with Vivek Dahiya for the Ganesh Chaturthi puja. Divyanka and Vivek couldn’t stop beaming with happiness as they posed holding each other’s hands. Wishing everyone on Ganesh Chaturthi, Divyanka had written, “They say He comes to you when He wants to. He finds a way. Our Ganu was love at first sight. Stayed with us only a short while giving us positivity and peace for the times to come. Ganpati bappa morya! #EcofriendlyGanpati #DiveksFirst.” Vivek had captioned his Ganesh Chaturthi special post as “Wishing everyone health (with the best immunity) and happiness. To new beginnings, our first. Ganpati bappa morya! #GaneshChaturthi.” (Also Read: Akshay Kumar Wishes 'Big Boy', Aarav On 18th Birthday With Throwback Photo, Showers Him With Praises) However, it was Divyanka Tripathi Dahiya’s Yeh Hai Mohabbatein co-star, Karan Patel’s actor-wife, Ankita Bhargava’s comment that had caught out attention. Karan and Ankita had embraced parenthood a few months back and the latter hope that Divyanka and Vivek too, welcome their Baal Ganesha by next Ganesh Chaturthi. Ankita had commented, “Having him come over is the most beautiful feeling ever. God bless you guys with more and more happiness! Next year Gannu bhaiya ko company dene ke liye koi Baal Ganesha hona chahiye!” To Ankita’s wish, Divyanka had replied with a sweet yet witty comment, “It's a beautiful start. I'm happy he chose us as well. By, the way, Abhi tumhare baal Ganesha is giving us more joy.” This isn’t the first time when Divyanka Tripathi Dahiya’s reply on a fan’s comment had left us in splits. On July 28, 2018, Vivek Dahiya had posted a shirtless picture of himself on his Instagram account, sporting well-toned abs and a fitter physique. He had captioned it as “This one is special! A lot of hard work but yes, it’s not only about achieving the desired physique but also feeling fitter from within and then continue maintaining it between hectic shoot schedules coz WILL is a SKILL! #Thankyou @bombaytimes.” While it had surely raised the hotness temperature high, his post was flooded with comments like, “Uffff... This fitness love u viv.... This is too hottt”, “Lol, every damn girl need a guy like Viv He is tooo hot”, “That must me insane hours at the gym, waah! As always you do us so proud ... so inspired to work harder at the gym now ...:)” and many more. But amongst these, one comment had caught our attention. One of Vivek Dahiya’s followers by the name, teamdivek had instantly replied on his post, “@divyankatripathidahiya can I marry him for a day? Just a day????” To this, Divyanka Tripathi Dahiya had replied in a hilarious and possessive way. She had retorted, “@teamdivek Thappad padega”. Ye Hai Mohabbatein fame actress didn’t stop here and had written another funny comment, “No touching no touching… Only seeing only seeing”. Divyanka had behaved like a typical possessive wife, no? Divyanka had indeed raised the adorableness quotient high with her possessive comment! (Also Read: Aly Goni Sends A Box Of GiftsTo Alleged Beau, Jasmin With A Quirky Note, Leaves Her In Two Moods) 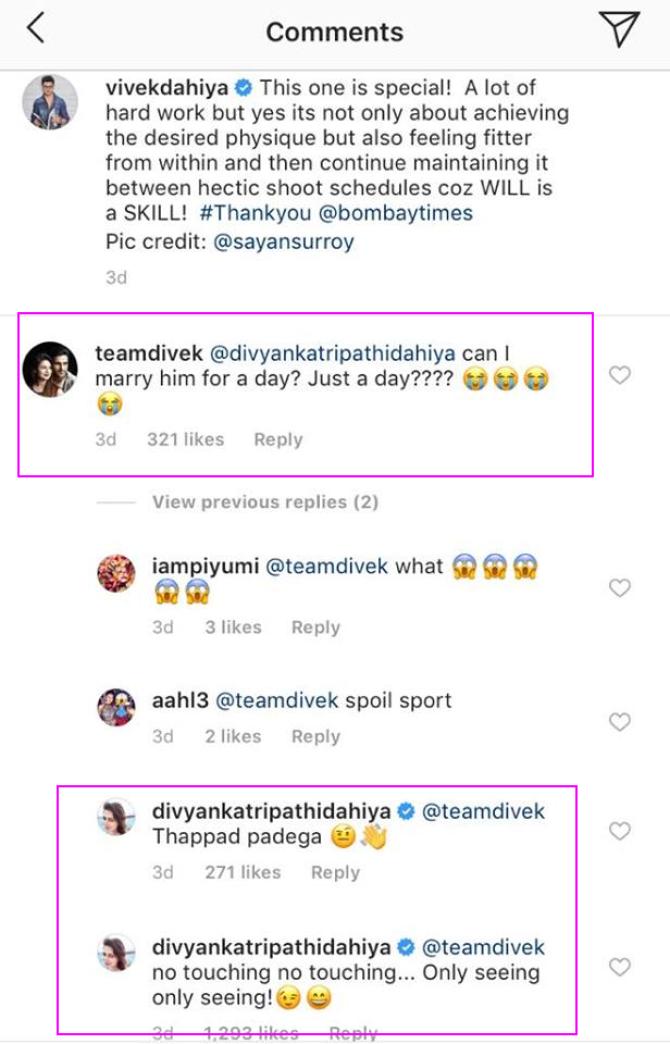 Divyanka surely knows how to handle the social media with a perfect amount of humour, wit and calmness!