Deepika Padukone engaged in the latest trend on IG 'post a picture of' and upon a fan's request to post an unseen picture of and her Ranveer, the actress complied. Scroll down to check it out!

When Deepika Padukone and Ranveer Singh were cast opposite each other in Goliyon Ki Raslila: Ramleela, no one had thought that movie would be the beginning of a wonderful love story. All the speculations and hopes had come true when the couple had exchanged the wedding vows on November 14, 2018. And we love their cutesy pictures and social media PDA with each other. (Recommended Read: Ankita Bhargava Shares The First-Ever Vacation Picture With Her Daughter, Mehr From The Maldives)

For Deepika Padukone's birthday, her doting husband, Ranveer Singh, who wears his heart on his sleeves for his ladylove, had posted the most adorable wish. The actor had taken to his Instagram handle and had shared a picture from his date with Deepika. In the picture, the duo had looked adorable. Ranveer had captioned the picture as "Biwi No.1" 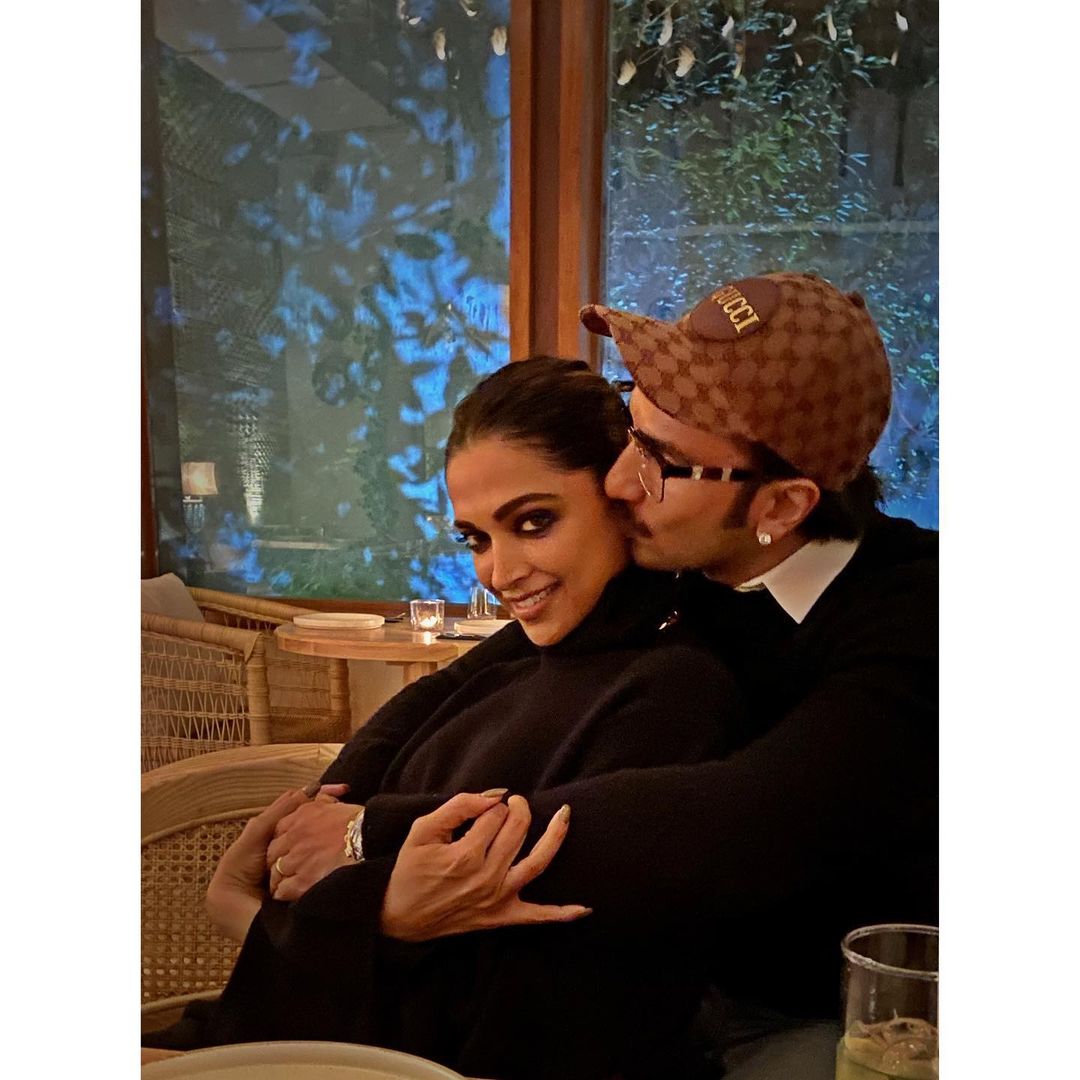 Recently, Deepika Padukone engaged in the latest trend on IG 'post a picture of' and upon a fan's request to post an unseen picture of and her Ranveer, the actress complied. She posted an adorable picture of herself feeding a cake to Ranveer, and we're guessing it was from Deepika's birthday party on January 5, 2020. When a fan asked her to post a picture of people closest to her, the actress had posted pictures of her hubby, Ranveer Singh and her sister, Anisha Padukone. Check out the pictures below: 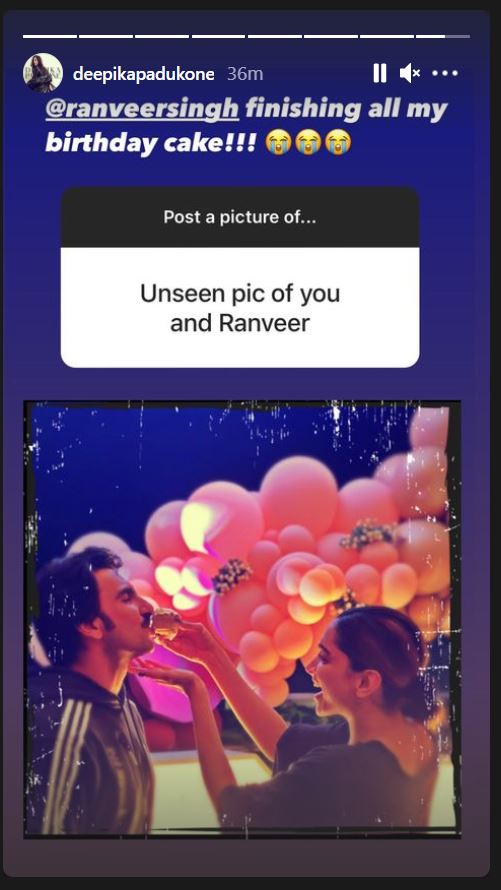 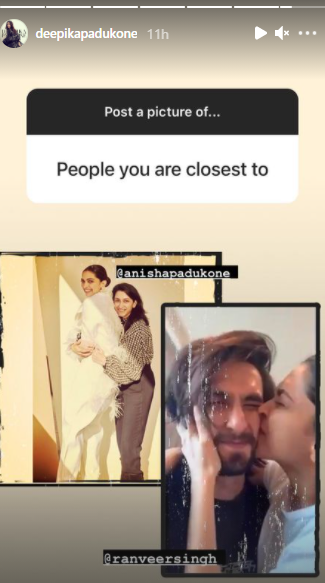 In an interview with Pinkvilla, Deepika had opened up on her relationship with Ranveer, and had shared, "Over a period of time because it's the small things that he did and the little things that he said which made me believe and feel more and more that he's the person I want to spend the rest of my life with. The foundation of our relationship is just solid friendship and for any successful relationship, that's very essential. It started off on that note right from the beginning and over the years that we have dated, it only became stronger and stronger. Over a period of time, I don't think there was that one definite moment." (Also Read: Sharad Malhotra And Ripci Bhatia Welcomes A Little Baby In Their Lives, Actor Says 'It's A 24x7 Job') In an interview with the Mumbai Mirror, Deepika had revealed that Ranveer is quite confident about himself which is one of the major reasons why he doesn't mind if his wife overshadows him. She had credited her husband, who is the reason why she believes that good men still exist. She had also revealed how she used to be anxious during her long shooting hours for Chhapaak and whether Ranveer would be upset about her coming home late. She had revealed, "I'd have a long day but I didn't feel anxious about whether he would be upset about me coming home late or because I hadn't called. I have been in relationships where I didn't have that. When you don't have to worry about such things, it allows you to focus on work." 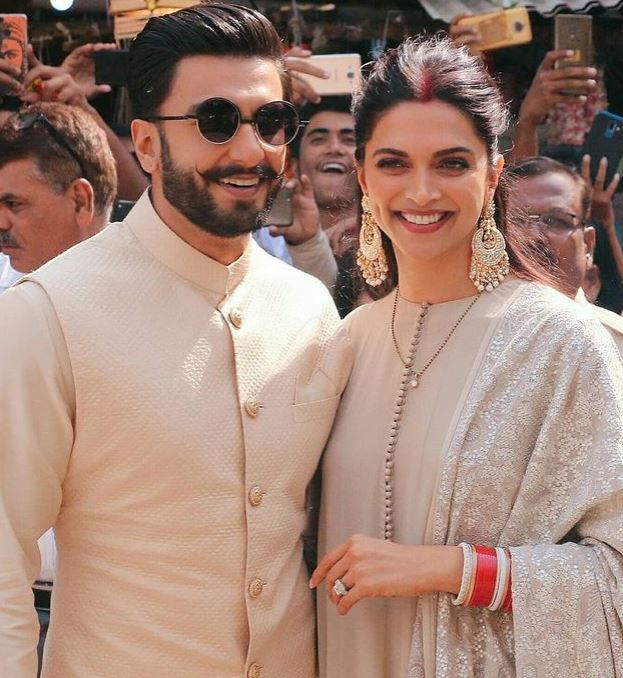 Ranveer had made his acting debut under Yash Raj banner's Band Baaja Baaraat and he had completed 10 years in the industry on December 10, 2020. He had taken to his IG handle and had shared a dapper picture of himself. On his post, his wifey, Deepika was quick to comment as she had thought her husband to be the most good-looking man. On his picture, Deepika had written, "Handsome" with a love-struck emoticon. (Don't Miss: Karanvir Bohra's Twins Bella-Vienna Smothers Their Newborn Sister With Kisses, She Holds Their Hands) 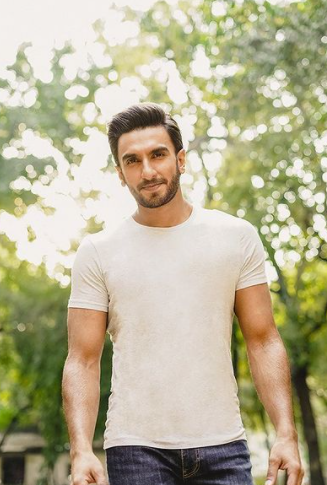 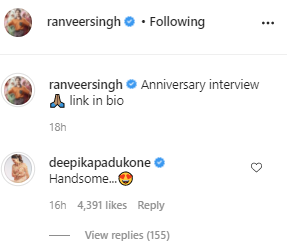 Well, 'DeepVeer' is our favourite jodi of Bollywood!